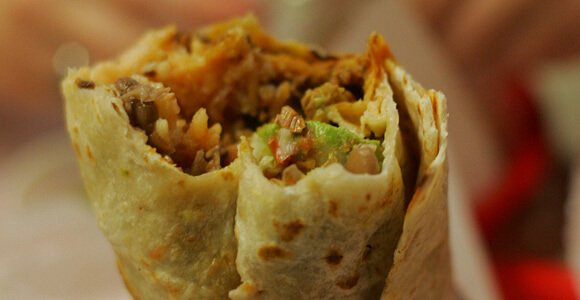 Box Brands has launched the first-ever burrito-making robots at two locations on Santa Monica Boulevard —  inside Mobile and 76 gas stations.

The orange Burritobox offers 6 types of burrito, including a breakfast burrito, and several sauces. The customer selects the burrito desired and which sauces from a touch-screen menu, then swipes a credit card. One minute later, the machine dispenses a hot “hand”-rolled burrito.

Box Brands, a Florida-based company founded in 2011, is marketing the robot to gas stations, corner stores and other small merchants. The machine’s touchscreen menu conveniently — or not so conveniently, depending on how you look at it — displays a commercial while the burrito is made. 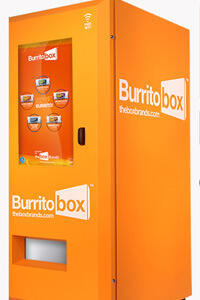 Welcome to the 21st century, where the revenue plan for widgets is advertising for other widgets.

“Brands now have an opportunity to interact with the consumer right before they have a chance to buy their products. Partnering with us gives you a captive audience as well as a live presence inside high traffic locations where you can better affect the choices consumers make,” Box Brands promises.

Gas-station quality burritos may not be the sexiest use of automation technology, but the Burritobox joins a growing number of fast food-making robots.

Pending FAA approval for commercial drones, one mainstream U.S. pizzeria will be ready to deliver its pies by drone.

Asia is ahead in automation of food service: Consumers there can enjoy noodles sliced by robot or sushi featuring rice balls made by SushiBots.

Curiously, each of the companies identifies different benefits of robot-made food. Burritobox claims to offer a healthier alternative to the Hot Cheetos and candy usually on offer at gas stations. Burger-maker Momentum Machines goes farther, suggesting that when restaurateurs save on labor they can invest in fresher, healthier ingredients.

Several of the fast-food bot-makers also emphasize that their devices can serve more consumers per hour than mere humans could. So these boxy bots could find a place at outdoor festivals. With the number of foods on offer, food-prep robots are also well positioned to wipe out the entire food court at the local mall.