Will Oculus Bring Immersive Virtual Reality to Consumers for $300 in 2014? 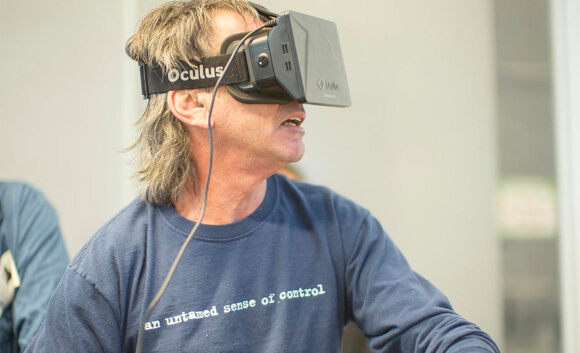 The Oculus Rift is a virtual reality headset. Though still a prototype, with each new update, the applause grows louder. The most recent version, dubbed Crystal Cove, received glowing reviews at the 2014 Consumer Electronics Show in Las Vegas.

Caveats and disclaimers aside, we want to see Oculus succeed. Engineers and researchers have been working on virtual reality for decades, but the Rift is the first real candidate for a quality experience at an affordable price. (They’re still hoping to sell the system for around $300.)

What’s so special about Crystal Cove? Previous versions of the Rift induced excitement because of the newness of the experience—but that experience was still imperfect.

Early Rift prototypes suffered from poor screen resolution (your eyes are inches from the display) and motion blur. Further, whenever the user moved their head back and forth or side to side, the entire world was dragged along. Motion sickness was a real concern.

Now a few of those flaws have been corrected, and though no date has yet been set, the prospect of a consumer version potentially later this year seems more realistic.

The first of those, positional tracking, is thanks to an external camera that tracks infrared LEDs embedded on the outside of the Rift headset. Users can now bend over, move side to side, or look around corners in the virtual world.

Meanwhile, low persistence gets rid of the blur. Previously, as a user moved their head, the machine continuously created and rendered updated images of their new point of view. This happened very fast but still took time. In the interim, frames displaying out-of-date images would flash by the user until the updated image appeared.

By all accounts, the result is a more immersive, more comfortable, less distracting experience. And that’s key for Oculus to take their system to consumers. Though no date is set, Oculus claims “big things” are on the way in 2014, and that they still have a few tricks up their sleeve to further improve the Rift.

But expectations are running very high, and a little caution is probably due. Yes, the Rift is impressive. No, it isn’t and won’t be the Matrix. In the near future, the team is gunning for seated virtual reality. They have yet to figure out a method for full body tracking that is sufficiently low-latency and high resolution.

While certain limitations still exist, like the fact the headset is wired, that hasn’t stopped imaginations from running free—imagine, for example, pairing the Rift with a sensor-laden gaming exoskeleton and low-friction treadmill?

If the hype holds, Oculus Rift may be just the beginning. For more, check out founder, Palmer Luckey, and VP of products, Nate Mitchell, answering redditor questions here: