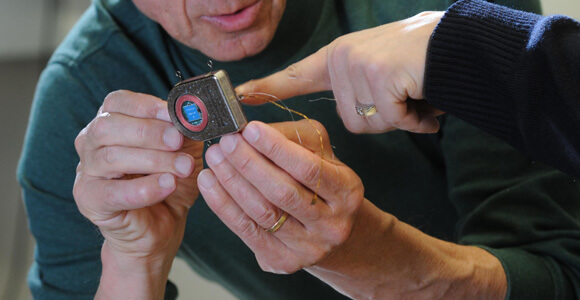 Prosthetic limbs that users control with their minds aren’t yet widely available, but several have been shown to work. Soldiers returning from the wars in Iraq and Afghanistan have made amputeeism a much more prevalent disability, and one with enough funding to drive innovative solutions.

Those who are paralyzed have remained more difficult to help because human nerves and muscles require more intricate forms of control than the simplified prosthetic devices.

But BrainGate, a program that pools research from several universities, is moving ever closer to giving paralyzed patients use of their limbs by using the same technology developed to drive computerized prosthetics to drive the paralyzed limbs. 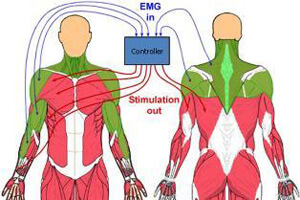 BrainGate is developing a system in which a patient’s mental signal to move an arm is recorded, filtered through a computer and sent as a command to an electric stimulation device that activates the patient’s muscles.

An implanted 16-channel sensor records the patient’s brain signals looking for those related to limb movement and sends it wirelessly to a computer. There, an algorithm designed to recognize motion-related signals translates the information into a command for an electrical stimulation device that prods the muscles used in the motion the patient envisioned. The stimulator can spur as many as 18 hand and arm muscles into action.

“The patient thinks ‘up and to the right,’ and we have a controller that actually figures out the correct muscle activations to move in that direction,” Robert Kirsch, a project collaborator, chair of biomedical engineering at Case Western and executive director of the Department of Veterans Affairs Functional Electrical Stimulation Center, told the MIT Technology Review.

The BrainGate researchers first tested their ability to record brain signals and convert them into simple commands for a computer cursor. They then succeeded at having paralyzed patients control robotic arms with brain signals. (Duke University’s Miguel Nicolelis has done similar work.)

BrainGate researchers also developed a small and sturdy wireless sensor to record neural activity that has proven safe for use in primates. The project is now undertaking a clinical trial that they hope will demonstrate that the implant could be safely and feasibly used in human patients.

At the same time, a virtual reality model arm being developed Case Western researchers is helping fine-tune the computer algorithm that will interface between the brain sensor and the electronic muscle stimulator by ensuring that they’re sending the right signals to the appropriate muscles.

The BrainGate research is, so far, limited to single-arm movement. According to Nicolelis’s recent research, controlling both arms or legs in tandem tasks a different and larger set of neurons in the brain. But, while Nicolelis and others are working toward using brain implants to give paralyzed patients motion while strapped into robotic exoskeletons, BrainGate would allow patients to reach and step with far less cumbersome cybernetic accessories.