DNA Origami to Nanomachines: Building Tiny Robots for the Body and Beyond 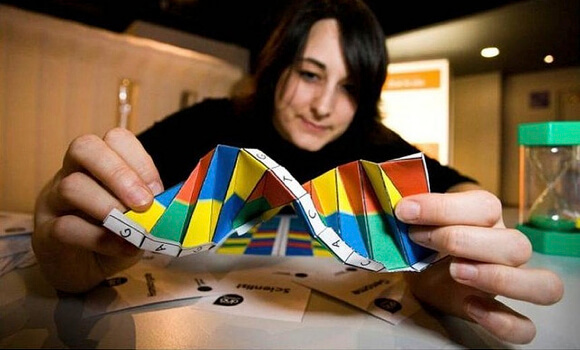 In 2010, Caltech’s Paul Rothemund gave a TED talk on a field of study called DNA origami, or the creation of microscopic shapes and forms from DNA. As it turns out, Rothemund said, DNA is an ideal nanoscale building material.

DNA’s double helix codes for self-replicating, computing machines called cells. As we begin building our own molecular machines—why reinvent the wheel? DNA origami, or alternately DNA nanotechnology, has been making rapid progress in recent years, but its roots go back more than three decades.

Inspired by an MC Escher woodcut, Ned Seeman, a chemistry professor at NYU, realized that by strategically linking DNA’s molecular base pairs, he could bend a string of DNA into different shapes. That was at the campus pub in the early eighties.

Seeman won the 1995 Feynman Prize for creating a DNA cube in 1991 and later a truncated octahedron. However, his early work didn’t hold together well. It would take another two decades to complete his vision of rigid DNA shapes in three dimensions.

Today’s researchers attach short strands of DNA to key points along a longer strand. Base pairs of the shorter strands adhere like pieces of tape or staples at various points along the long strand, thus bending it into form. Shapes include nanoscale tiles, cubes, spheres, polyhedrons, gears, characters of the alphabet, even smiley faces.

Here’s the best part: There’s no painstaking fabrication on mind-bendingly tiny scales. Scientists need only mix the right bits and pieces of DNA, heat the mixture, and as it cools, millions or billions of tiny shapes self-assemble.

Aided by design software and the latest methods, researchers can now make more complex shapes faster—and along the way, they’ve begun to figure out how to make those shapes perform simple actions.

In Rothemund’s 2010 talk, he showed how you could create squares out of two dimensional DNA tiles and govern how big they would grow with code. Rothemund’s tiles were performing rudimentary computation. (Some folks think we might pursue DNA as a material for pure computing in the future.)

But neither static shapes nor simple computers alone are the goal—researchers want to combine the two to make functioning nanomachines.

Bachelet’s DNA nanomachines (he describes them as “clam shells”) remain shut tight until a special circumstance, like a collision with a cancer cell, induces them to open and release their cargo. (Singularity Hub members can check out Bachelet’s longer 2012 talk at Singularity University in ‘Video Central’.)

One revolutionary application of DNA nanomachines like Bachelet’s may be selective drug therapy. Current drug therapy is akin to a shotgun blast. We accept the sacrifice of healthy cells as long as malignant cells are taken out as well.

Bachelet says there’s a long list of drugs that, however effective, simply aren’t practical because they do too much collateral damage or interact poorly with other drugs. “We have amazing drugs already. We just don’t know how to control them.” DNA nanomachines may be able to deliver drugs directly to sick cells, sparing healthy ones.

Or at scale, nanomachines might be programmed to exhibit swarm behavior, where simple rules at the level of individuals result in complex higher level group actions. Worker ants, for example, are governed by a limited set of instructions, but together they scout for food, test weather conditions, care for young, and build colonies.

Bachelet thinks drugs that don’t interact well could be employed in the body simultaneously. Such drug-carrying nanomachines would be coded such that when drug A is active, drug B is repressed and vice-versa.

Or like ants, swarms of nanomachines might build a bridge over damaged tissue—a severed spinal column, for example—and release healing growth factors.

Beyond the body, researchers are working on DNA transistors, wires, and capacitors. And Harvard’s George Church thinks we may use synthetic DNA to someday build macroscopic machines from the molecular level up—just like in nature.

Of course, no field has fuel enough to tackle tough problems without getting fired up about the future. But DNA building techniques are still lab-bound and fabrication isn’t yet ready for prime time. In most cases, only about 30% of “folded origami” DNA molecules in solution match the intended design.

That said, while DNA nanotechnology remains the stuff of seductive TED talks for mere mortals in the immediate future—with a little patience, the promise and potential pay-off in coming decades may be very great indeed.