uArm, A Mini Robotic Arm You Can Assemble and Control 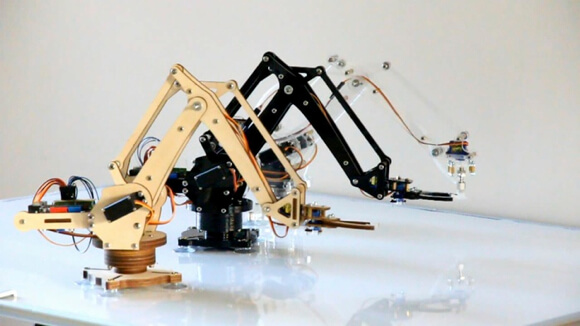 Robotic arms live in factories, tirelessly assembling heavy things, cutting through metal (like butter)—and generally doing some pretty dangerous and crucial work. But unless you run an industrial firm, chances are you haven’t had the chance to own one. Until now, that is. With the uArm Kickstarter, you can assemble and mount your very own mini robotic arm on the desk, nightstand, or kitchen counter for a pledge of $185.

Based in Shenzhen, China, UFactory—short for “your factory”—makes user friendly, open source hardware kits to help people learn about electronics and robots. “Robots are awesome,” they say, “and wouldn’t it be nice if everybody who wants a robot arm can actually afford one? After all, $50,000 is kind of a lot of money.”

The uArm robot is a mini version of a standard industrial robotic arm. The body is assembled from either laser cut wood or acrylic parts and driven by an Arduino microprocessor and set of off-the-shelf RC servos. Most of the mass is in the arm’s base, improving stability. Four suction cups firmly mount it to any clean, flat surface.

But what to do with your new robot friend? The kit comes with either a standard gripper (think a crab’s claw) or, for a bit more, a suction gripper and vacuum pump. 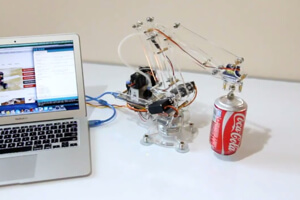 For those well-versed in code, the uArm can be programmed to perform actions—like lifting an out-of-reach Coke and conveniently depositing it next to your hand. (Though making your life more sedentary and cola-infused won’t likely gain the approval of most physicians.)

Other possibilities? The Kickstarter suggests making uArm a robotic desk lamp with an LED light or setting up a miniature desktop assembly line. And for non-programmers, uFactory whipped up an app allowing users to control the arm with their mouse. They’re also working on iOS and Android apps for smartphone control.

But uArm isn’t for those hoping to purchase a robot, preassembled and ready to go. In line with the company’s motto, uArm is a hands-on way to learn about robotics by building a simple one yourself. Perhaps a good project for anyone, young or old, who’s excited about robotics and ready to dip their toes in the water.

The company will include detailed instructions and tutorials on how to assemble uArm once the kit is finalized, and uFactory will make the design files, hardware and software open to the public when the kits ship in May.

Though the team said they’d release the information regardless of whether the Kickstarter succeeded or failed—they’ve exceeded the original $5,000 goal by over $60,000 with 37 days to go.

Sure, robotics and making stuff isn’t everyone’s cup of tea, but UFactory’s enthusiasm is contagious: “We want to share our joy with the rest of the world and make more people realize how fun robotics can be!”