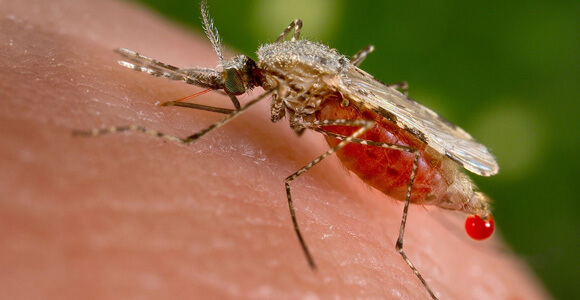 Malaria is a disease untamed by modern medicine. There’s no vaccine; tests are slow and inaccurate. The disease, meanwhile, kills with terrifying efficiency, sometimes in as little as 24 hours. Hundreds of millions of people fall ill with malaria every year, and roughly 600,000 die.

Efforts to devise better, cheaper tests are nothing new, but Rice University researcher Dmitri Lapotko has developed the first bloodless, instant test for the disease. According to a recent paper in the Proceedings of the National Academy of Sciences, Lapotko’s test is accurate enough to detect a single infected red blood cell in 800 with no false positives.

“Ours is the first through-the-skin method that’s been shown to rapidly and accurately detect malaria in seconds without the use of blood sampling or reagents,” said Lapotko. 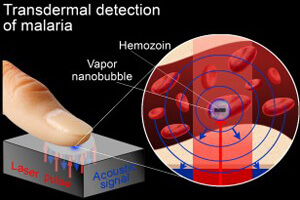 Here’s how it works. A laser burst through the skin of the ear or finger heats the hemozoin iron crystals that malaria parasites carry as a byproduct of digesting hemoglobin. The heating hemozoin creates a tiny bubble, which eventually pops. The test identifies the visual and acoustic signatures of that pop. (Because the popping bubble only occurs as a result of laser stimulation, there are, researchers say, no false positives.)

The laser seemed to cause no pain to the mice or damage to their ears, and when tested on human ears, it also appeared safe and painless.

The benefits over previous testing methods are marked. Because no medical personnel are required to perform the test, it would be more accessible to more people, and it gives instant results. It appears less likely than current tests to be deceived by the low malaria loads that mark the early stages of the disease. And it can detect the malaria parasite at any point in its lifespan in its host, another cause of potentially deadly false negatives.

The total cost per test would be roughly 50 cents. The laser is tough enough to withstand harsh conditions — such as those in semi-rural Africa and Latin America, where malaria is most common — with little maintenance. It can even run on a car battery.

If the H-VNB method works on humans as well as it worked on mice, it may bring instant, accurate malaria tests to hundreds of thousands of people.