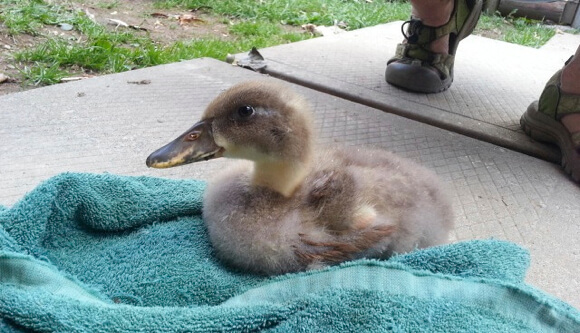 Thanks to a few thoughtful individuals and a 3D printer, Dudley the duck has a new lease on life. Still a duckling, Dudley and his siblings were placed in a cage at an animal shelter with some aggressive chickens. In a fight that left his siblings dead, Dudley’s leg was seriously injured and had to be amputated. 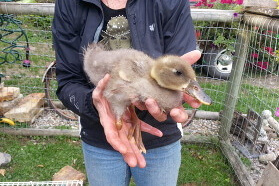 The shelter’s owner, Brandon Schweitser, coaches jiu jitsu on the side. One of his students, Terence Loring, runs a 3D design company called 3D Pillar Designs. Schweitser asked Loring whether he might design a new leg for Dudley.

After taking a few measurements, Loring whipped up a simple design for a leg attached to the stump with a tube at the top and a flipper at the bottom for walking and paddling. He sent his design to a local 3D printing firm, Proto3000—and just like that, Dudley had a new leg.

The leg isn’t perfect, nor is Dudley’s new gait. But Dudley is a duck, at a shelter—with a custom prosthetic leg. Pretty awesome. (Check out video of Dudley on his new leg here.)

Dudley isn’t the first animal to benefit from a 3D printed prosthetic. He’s not even the first duck. Buttercup, a duck in Tennessee, was born with a backward foot that had to be amputated. Now, like Dudley, Buttercup has a new foot.

Unlike Dudley, however, Buttercup’s foot itself wasn’t 3D printed. Rather, the 3D printing firm, NovaCopy, scanned Buttercup’s sister’s foot. They used the subsequent digital model to 3D print a mould into which they could inject silicone for the foot. Silicone, they reasoned, would be more flexible than the traditional plastics used by 3D printers.

Of course, there was no guarantee either duck would actually use their new prosthetics—but they’ve taken to them like ducks to water.

It’s great to see 3D printing helping ducks with disabilities, but the technology helps humans too. 12-year-old Dylan Laas, for example, lost the fingers on his right hand to a condition known as amniotic band constriction.

Prosthetics traditionally cost thousands of dollars, but 3D printing may bring the expense down dramatically. Laas is now the proud owner of a working $150 3D printed Robohand. And Alabama’s Zero Point Frontiers is designing a simple 3D printed hand that may cost as little as $5.

Cheaper prosthetics are especially beneficial for children. Kids grow like weeds, and keeping them equipped with a properly fitted device just doesn’t make sense for most families—it’s much too expensive.

Just as Loring made his design for Dudley’s new leg open source, Robohand’s designers, Richard Van As and Ivan Owen, likewise made their work open source and available on 3D design site, Thingiverse.

What’s the upshot of all this?

Perhaps in the coming years anyone with a 3D printer and a little time will be able to print and assemble a basic prosthetic at home for the cost of materials. Or maybe top quality products will still be manufactured by companies—only at a fraction of current prices.