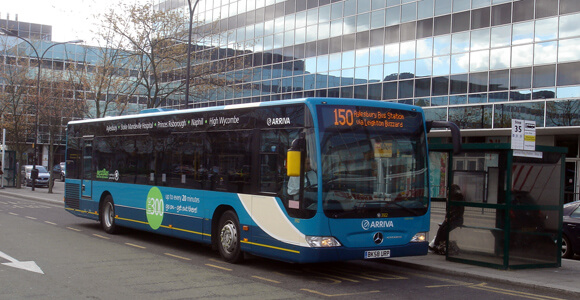 In Milton Keynes, 75 miles north of London, the UK is launching its first all-electric buses. The years-long pilot program consists of eight buses traveling a 15-mile route between the suburbs of Wolverton and Bletchley, which once housed the UK’s important World War II decryption efforts. The buses will run all day with the help of induction charging plates at the beginning, middle and end of the route.

During a 10-minute layover, the system can provide two-thirds of the energy the bus uses along the route.

The rollout represents the first time the UK has used the induction technology whose biggest test to date is taking place in South Korea. Smaller pilot programs like Milton Keynes’s are underway in Italy, the Netherlands and Mannheim, Germany. But only in South Korea can vehicles charge in transit.

The German company Conductix-Wampfler provides the induction charging system for the UK and Italian programs. Primary coils buried in the road at both ends of the route and in the central part of the city send power to receiving coils on the bus chassis. The two coils come within a few inches of each other when the bus is parked at the charging station.

The Milton Keynes council expects the project will reduce tailpipe carbon emissions by 500 tonnes. Air pollution will be dramatically reduced as well. The cleaner buses will also save the city $20,000-25,000 a year in running costs because electric fuel is cheaper than diesel fuel. Conductix-Wampfler also boasts that its products rarely require maintenance because they’re protected under the road and don’t rely on moving parts.

Eight buses is a modest start toward a clean energy future, to be sure, but if in coming years the buses deliver on their cost- and pollution-saving promise, the town council plans to move all of its buses over to the electric system, council member John Bint told the BBC. The pilot programs will also get riders used to the idea of wirelessly charging buses, potentially creating a larger market if there are no unforeseen problems. (There are some concerns about the electromagnetic fields in electricity induction, but generally only when they’re much more powerful than those the charging systems used.)