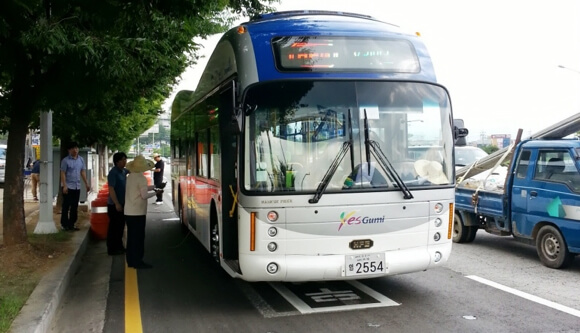 Electric vehicles still have limited range, expensive batteries, and few charging stations. While mainstream manufacturers seek to improve battery tech, the Korea Advanced Institute of Science and Technology (KAIST) has a different idea. Who needs big batteries and stations when the road itself can charge vehicles?

How does it work? The buses are inductively charged throughout the route by 180 kW power sources periodically embedded in the road. KAIST says just 5% to 15% of an already existing road needs to be rebuilt to convert it into a wireless charger.

Each power source connects to the grid and is selectively turned on or off as a bus approaches and leaves. When on, the source produces a magnetic field that wirelessly transfers energy to a receiver underneath the bus. The magnetic field is converted back into an electric current and sent to the battery and motor.

KAIST’s approach was first developed by researchers at the University of California, Berkeley. But the scientists worried strong electromagnetic fields might have adverse health effects and abandoned the idea. (A problem KAIST says they’ve solved—their vehicles fall within international standards for health and safety.)

KAIST says their buses convert up to 85% of the power sent from the embedded source. Their batteries are about a third the size of a typical electric car battery, thus reducing weight and cost, yet they needn’t ever stop to charge. If all goes well, ten more KAIST buses will be added to the route by 2015.

Wireless power transmission has a long history. Of course, Nikola Tesla is the godfather of wireless power. Tesla wanted to send electricity wirelessly from central power stations using giant Tesla coils, and he even filed a patent for an inductive electric railway system.

Indeed, a fleet of inductively charged buses have prowled the streets of Turin and Genoa, Italy for over a decade. But the Italian buses aren’t charged along their route, like the KAIST buses. And that’s what makes the Korean system unique.

When KAIST president Suh Nam-Pyo spoke at the system’s first test site, an amusement park in Seoul, he boldly claimed, “The potential for application [of this technology to public transport systems] is limitless. I dare say this is one of the most significant technical gains in the 21st century.”

So, are road-charged wireless vehicles the wave of the future?

Although the prospect of a continuously juiced car sounds lovely, inductive roads on a grand scale probably aren’t realistic. The private sector can buy and build discrete charging stations, but the government has a monopoly on roads—and it’s already difficult to marshal funds to rebuild older pieces of infrastructure. Even for governments who subsidize electric cars, upgrading and maintaining a nationwide network of inductive roads would be a different story altogether.

In all probability, political support would be hard to win before electric car tech goes mainstream. But lacking an alternative, wide adoption of electric cars requires manufacturers improve batteries and build charging stations—at which point, there’d be little need for inductive roads, and the issue would be a non-starter in legislatures.

But what about on a smaller, more specialized scale, like along heavily traveled public transportation routes in cities? That seems more likely. Electric trolley buses are ubiquitous around the world. While they reduce noise and pollution, they also draw energy from a bristling nest of wires overhead. By limiting required funding and promising to beautify a few urban areas in the process, KAIST’s inductive roads would be an easier political sell, and may well take root in a city or two—maybe more.