Prosthetic Hand Wires In Patient’s Nerves For Sensations Of Touch 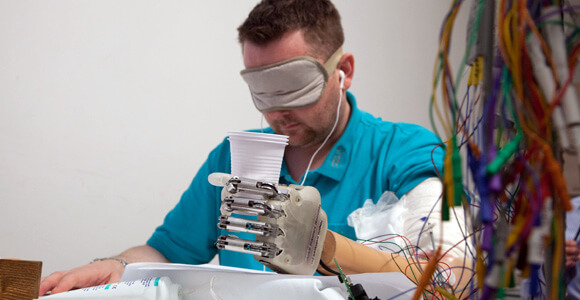 A number of projects are closing in on the goal of delivering a prosthetic hand for amputees that allows them to feel how hard they’re holding an object and process some information on its texture.

“You could feel round things and hard things and soft things, and the feedback was totally new to me,” said Dennis Aabo Sørensen, a 36 year-old Danish man who lost his hand almost a decade ago while handling fireworks.

Sørensen usually wears a prosthetic that allows him to grip objects by detecting muscle movement in his stump, which is currently the gold standard of care for amputees. But last year Sørensen became the first of a month-long clinical trial of a computerized prosthetic that establishes a two-way exchange of information between the patient’s brain and sensors in the artificial hand.

A computerized hub connects the brain to the nerves in the arm, allowing the patient to command the prosthetic hand and receive a report back on how firmly he or she is gripping.

Unlike other efforts to establish two-way communications between a prosthetic or paralyzed hand and the brain that require an implant in the brain, the hand, called LifeHand 2, requires only the surgical implantation of electrodes in the patient’s arm. (Singularity Hub has reported on a similar method coming from Case Western Reserve University.)

Even blindfolded, Sørensen was able to describe the objects he was handling to the researchers, they report in a recent paper in Science Translational Medicine. Sørensen managed to calibrated gentle, medium and firm grips, and, amazingly, the feedback on how hard his grip was allowed him to deduce the basic texture and shape of the objects.

“This is the first time in neuroprosthetics that sensory feedback has been restored and used by an amputee in real-time to control an artificial limb,” Silvestro Micera, a neurosurgeon at the Ecole Polytechnique in Lausanne, Switzerland and an author of the study, said in a statement.

LifeHand 2 features artificial tendons that detect tension in the fingers and covert the information into an electrical current. The computer mediator refines the current into impulses that the brain can understand as nerve signals and sends them to the brain by stimulating the median and ulnar nerves by way of ultra-thin multichannel electrodes. 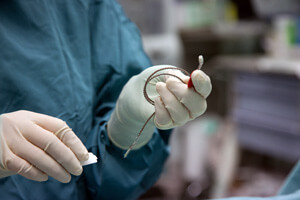 One technical challenge was making sure that the delicate electrodes would continue to work even after scar tissue formed. That test complete, the electrodes were removed from Sørensen’s arm after a month due to safety restrictions imposed on the trial. Still, the scientists expressed optimism that the wires could remain implanted without damaging to the nervous system.

The team is now working on electrodes that would last for years after being implanted. They’re also trying to shrink the size of the computerized hub to make it fully portable. And of course, they’ll keep tweaking the scope of precision of what the hand can report to the user.

For his part, Sørensen hopes the prosthetic wins regulatory approval in Europe so he can use it permanently.