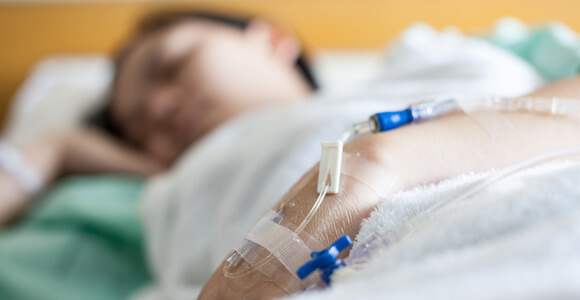 There are certain words that you would never want to hear coming from a healthcare provider. “Salvage chemotherapy” and “Hail Mary transplant” would rank high on that list for most of us.

And yet it was patients who weren’t even eligible for these treatments or for whom they’d already failed who participated in a recent clinical trial for a cell therapy treatment for adult B-cell acute lymphoblastic leukemia, or B-ALL, led by Michel Sadelain at Memorial Sloan Kettering Cancer Center.

Cell therapy refers to a new, very promising way of treating cancer. Also sometimes called immunotherapy, it involves genetically modifying patients’ T cells so that they use a particular biological marker to identify and destroy cancer cells, which the immune system doesn’t generally recognize as a threat.

“If you take a pill or chemical, once you’ve given the pill, that’s what you’ve got and then it’s eliminated, and you can’t go too high because it sometimes gets toxic. In this case, the T cells are stimulated by the cancer. It’s a treatment that we only give once and then they proliferate. It’s what we call a ‘living drug,’” Sadelain told Singularity Hub.

Sadelain and his colleagues pioneered cell therapy in 2003 with a report that they had successfully genetically engineered mouse T cells to target the protein CD19, which is found on leukemia and lymphoma and on healthy immune B cells. Last year, the researchers reported on a five-person clinical trial; the current trial, with 16, is the largest study published of a cell therapy to treat advanced leukemia.

Other labs have also developed related approaches to leukemia and lymphoma. Singularity Hub previously covered a successful University of Pennsylvania trial of a cell therapy method used to treat other forms of leukemia by targeting CD19. The patients in the current study were sicker, according to Sadelain.

The study documents 16 patients with relapsed B-ALL who were given an infusion of their own T cells, which had been harvested from the blood and subsequently genetically modified to target CD19 and multiplied in the lab.

The overall complete response rate was 88 percent, and just three patients failed to achieve complete remission. Seven patients — 44 percent, as compared to a rate of 5 percent with conventional treatments — recovered enough to successfully undergo a bone marrow transplant. Transplants are the standard of care for B-ALL since they offer the only proven way to prevent recurrence. If further research indicates that cell therapy offers a permanent cure that’s at least as reliable as bone marrow transplants, it may make them unnecessary.

There’s still a lot to be learned about cell therapy, and the patients who didn’t respond may be as instructive as those who did. How can a cure that is so miraculous for some fail to help others?

In one instance, researchers were unable to get the patient’s T cells to multiply in the lab. “We think some people may just have so much damage in their T cells from their disease or other treatments or perhaps from their genetics,” Sadelain said.

Another patient who didn’t respond completely had cancer only in the lymph nodes, not in the bone marrow, at the time of treatment. That case could mean that weaponized T cells won’t work on cancers in all parts of the body.

Of course, the main challenge for cell therapy will be to expand the range of molecules that T cells can be programmed to target so that the same basic method can fight more types of cancer. The molecule must be reliably found on cancer cells, but, because all other cells in the body with the same marker will likewise be destroyed, it must be otherwise limited to parts of the body that the patient can do without.

“We know we can make powerful T cells, so we have to be judicious in the targets we identify. That’s one of the big questions for the future is to find targets that meet that criteria,” Sadelain said.

Sadelain and his colleagues are gearing up to try cell therapy against lymphoma later this year. They’re also looking to adapt their approach to fight lung and ovarian cancers, both of which are among the deadliest types of the disease.