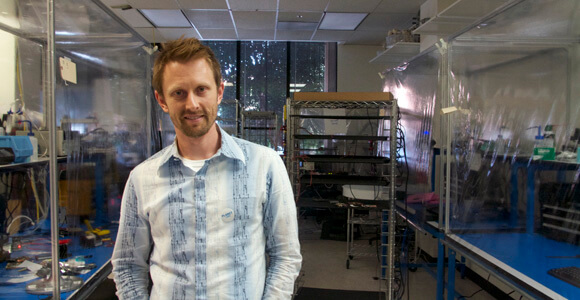 Silicon Valley sprung up on big open stretches of land where military installations had once been. Early semiconductor and computing businesses needed the space. But as Moore’s law progressed and mobile computing became the thing, the tech industry crept up into the seven-by-seven mile peninsula that is San Francisco. The city’s South of Market district is now nearly a strip mall of tech startups.

But tucked away in one of the neighborhood’s utilitarian office buildings is a technology company that harkens back to the early days of Silicon Valley: Planet Labs, founded by former NASA engineers, which builds satellites to photograph the Earth. Even so, the company doesn’t need a ton of space: Its satellites are about the size of a breadbox. The company recently recruited a batch of Stanford University students and built 28 satellites in 17 days in its cramped SoMa offices (pictured above).

Planet Labs says its fleet of small, low-cost satellites will provide, for the first time, a full set of satellite images for the entire planet with none more than 90 days old. The company hopes a single, consistent data set will drive better environmental research.

“When you count all of the available satellites with all the different sensors, there’s no one homogenous view of what the Earth looks like in sharp enough resolution to tell us what’s happening,” co-founder and CTO Chris Boshuizen told Singularity Hub.

The average age of an image in Google Earth is 36 months, Boshuizen said. In some cases, adjacent images show two different seasons. That’s because it’s prohibitively expensive, unless you are a national military, to task one of the camera-equipped satellites with a particular subject — most consumers simply wait until a deep-pocketed buyer requests the photo they also want.

In addition to selling its images to mapping companies like Google, Planet Labs hopes to sell them at discounted rates to researchers and environmental groups to empower people to protect our planet and its natural resources. Google Earth images have shown longer trends of deforestation in the Amazon, for example, but up-to-date images might give NGOs and environmental groups time to stop the problems before they become trends.

The photos could also help in disaster response, Boshuizen said. There are a lot more pictures of, say, North Korea than there are of countries, such as Haiti, that are are of little interest to the big global powers. 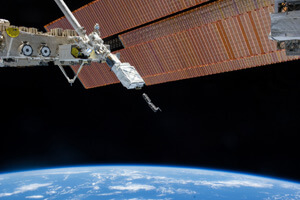 After the 2010 Haiti earthquake, relief workers did not have up-to-date maps of Haiti and relied on crowdsourcing to learn the extent of the damage. With 28 satellites in orbit with the sole function of providing geographical images, Planet Labs expects to be able to provide images of disaster areas almost immediately.

The number of satellites makes the difference, and the company was able to afford to launch so many satellites by making them smaller. The cost of launching a satellite is directly tied to its size, and Planet Labs cut costs by a factor of 8.

How do you get that compact? Apparently, you just decide to do it.

“It’s kind of the four-minute mile — even doctors thought that perhaps there was a physiological limit, that a human being could not run a mile in less than four minutes. But then when Roger Bannister did it, within a month ten other people had done it. I know some of the other actors in the space industry had looked at this and really didn’t think that this type of application could fit in a box as small as the one we put it in,” Boshuizen said. 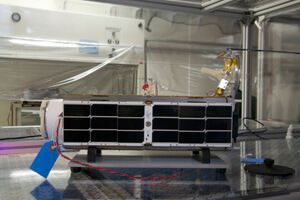 Planet Labs started with four proof-of-concept launches last year using an experimental license from the FCC, which regulates satellites because of the bandwidth they use to send data back down to Earth. Like Bannister, the company quickly found competitors so had to act fast to maintain its lead.

Having shown that its radios work and can play nice with other satellite radios, the company was able to obtain permission to put its fleet of 28 satellites into orbit for two years. Given their small size, low orbit and a plan to maximize drag as they fall out of orbit, Planet Labs’ satellites will be essentially atomized, Boshuizen said, and won’t contribute to the growing space debris problem.

“Space debris is another one of these potential tragedy of the commons issues, and as one of the first companies to launch a large number of satellites, we have to get it right or we’ll ruin it for everybody else,” Boshuizen said.