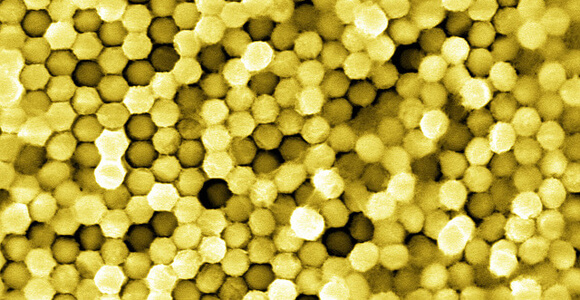 Nanotechnology doesn’t get as much attention these days as genetic and stem cell approaches to medicine, but all three aim to target the causes of illness with greater precision and less collateral damage in the rest of the body than conventional approaches.

Nanotech breakthroughs have come more slowly than many had hoped, but a recent success shows progress toward the goal of using tiny nanomachines to repair or destroy only specific diseased cells. But before nanomachines can deliver medicine directly to cells’ door, they have to work properly in a biological environment.

Researchers have made an important step in that direction, navigating nanomotors inside living human cells for what they say is the first time.

The motors — made from the biocompatible materials gold and ruthenium  — are propelled by ultrasound waves scattering off both ends of the rod-shaped devices. The ultrasound source can be turned down to pause the motors, and magnetism crudely controls their direction.

“This research is a vivid demonstration that it may be possible to use synthetic nanomotors to study cell biology in new ways. We might be able to use nanomotors to treat cancer and other diseases by mechanically manipulating cells from the inside. Nanomotors could perform intracellular surgery and deliver drugs noninvasively to living tissues,” said lead author Tom Mallouk, materials science professor at Penn State.

At this early stage, the motors had only basic functions. They could be used as a kind of egg-beater to mix all the contents of the cell together, or they could be used to puncture the cell. But even with such blunt control, scientists can gain insight into processes inside the cell that have remained opaque.

The tiny rods resemble microbes and exhibit similar kinds of collective behavior. But researchers were also able to control the machines individually, which will be necessary before nanomachines can be tasked with delivering precise medical treatments.

“Autonomous motion might help nanomotors selectively destroy the cells that engulf them. If you want these motors to seek out and destroy cancer cells, for example, it’s better to have them move independently,” Mallouk said.

Nanoparticles have been used in medical applications, but their individual movements can’t be controlled. Still, they’ve already been used to seek out sick cells. UCLA researchers recently designed nanoparticles to find cancer tumors and release chemotherapy drugs into them when triggered by a laser. And in a 2013 mouse study, clusters of nanoparticles responded to blood sugar levels by releasing sugar or insulin to keep levels within the healthy range.

The nanomachines research comes from a lab that has made several important advances in the field. Mallouk first discovered in the early 2000s that nanomotors could be powered chemically. He later found that ultrasound waves, a much more desirable power source for biological applications, could be used.

While Mallouk’s lab works with materials that have distinct properties on the nanoscale, another subset of nanotech researchers is looking for the ideal materials from which to build durable, microscopic structures. Some posit, piggybacking on nature’s own materials engineering, that DNA is an ideal raw material for nanomachines.

The nanomotors research was published in February in Angewandte Chemie International Edition.