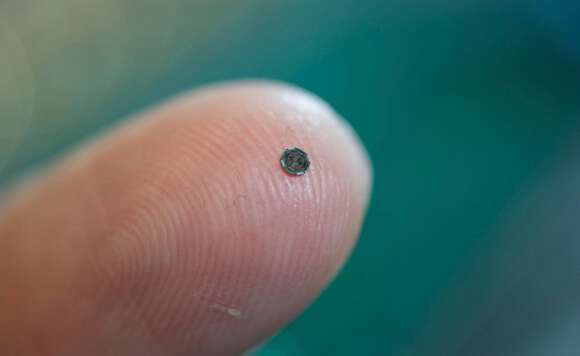 There’s a rule of thumb in surgery—the less invasive the procedure, the better. Less invasive surgeries reduce patient discomfort, foster faster recoveries, and limit the risk of infection. Problem is, you have to get your eyes on a problem to solve it.

In heart surgery, for example, practitioners use external ultrasound to view blockages. The images are useful, but they are only good enough to serve as a general guide. Georgia Tech researchers, led by Professor F. Levent Degertekin, think they can improve the situation and even reduce the frequency of invasive heart surgery.

“If you’re a doctor, you want to see what is going on inside the arteries and inside the heart, but most of the devices being used for this today provide only cross-sectional images,” Degertekin says.

The group is building a tiny wired ultrasound device that surgeons can snake through arteries to provide a 3D, front-facing image of blockages in real time—the “equivalent of a flashlight” in the heart’s lightless passageways.

There are, of course, already internal ultrasound devices. These are used to image various organs—the stomach, for instance, by way of the esophagus. What makes this particular device special is its size and ability to travel into smaller pathways.

The device’s ultrasound transducers form a 1.5 millimeter ring around a hair-like guide wire. They send high frequency sound bursts ahead and listen for echoes. The signal is translated by a 1.4 millimeter silicon chip and sent out by wire where software constructs the image in real time and at higher resolution than external ultrasound.

The minuscule size of the apparatus is enabled by information technology, from the transducers, micromachined by computer, to the chip, a mere speck on a fingertip. And beyond its diminutive size, because the chip can process part of the ultrasonic signal on site, it limits the number of cables communicating information.

“You want the most compact and flexible catheter possible,” Degertekin says. “We could not do that without integrating the electronics and the imaging array on the same chip.”

The team will move on to animal trials in the near future, and they hope to license the technology to a medical diagnostics firm with the resources to conduct clinical trials in humans and eventually seek FDA approval for clinical use.

The device exemplifies a general trend in medicine—tiny yet capable chips are driving miniature devices that can live and work in the body and accomplish some tasks that once required invasive operations.

Take, for example, Medtronic’s pacemaker the size of a multivitamin that twists its way through the body’s vasculature to the heart by way of a small incision in the thigh. Or smart pills that, when swallowed, take images from inside the body, automatically deliver medication, or simply report that you’ve swallowed them.

Intuitive Surgical’s Da Vinci surgical robot enables smaller incisions and less invasive surgeries. But the robot isn’t some emerging technology we’ll have in the future. It was introduced fifteen years ago, has already performed tens of thousands of procedures, and is in residence at some 2,000 hospitals across the world.

The truly disruptive technologies will be adenoviruses or nanomachines programmed to seek and destroy diseased cells or clear arterial blockages on sight. These technologies won’t improve surgery, they’ll do away with it almost entirely.

In the not too distant past, successfully completing incredibly invasive surgeries, like heart transplants, was considered a great achievement. Looking forward, our goals lie in the opposite direction—the same results but fewer scalpels and incisions and more miniature robots and tiny computer chips.