Backing Up the World’s Food Supply with 800,000 Plant Species on Ice 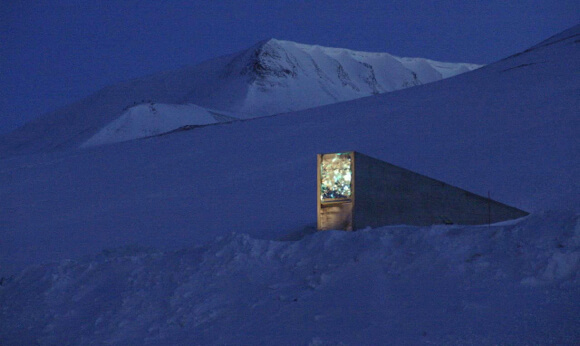 In March 2008, on a remote Norwegian island in the Arctic Circle, the Svalbard Global Seed Vault, or “doomsday vault,” took its first deposits. The vault’s builders had spent some $7 million and 12 months blasting a tunnel and three chambers into the mountainside’s hard permafrost. To be stored within? Treasure.

The doomsday vault keeps the world’s agricultural heritage in deep freeze. Six years on, and after a recent deposit of 20,000 species, the vault now houses over 800,000 plant species, and with an average 500 seeds per sample, some 400 million seeds.

That may sound like a lot, but the doomsday vault was designed to store more. A lot more. At full capacity, in drawers lining the walls of its three chambers, the vault can fit 4.5 million species and some 2.25 billion seeds.

Think of the doomsday vault as the external hard drive backing up the genetic data of the world’s plant-based food. Or, if you prefer, a modern day Noah’s Ark for wheat, corn, rice—the world’s agricultural species in all their diversity.

Genebanks in Iraq and Afghanistan, for example, were destroyed in recent years. In Afghanistan, looters were after the glass jars storing the seeds.

A typhoon wiped out most of an important genebank storing rice in the Philippines, and Japan recently sent barley samples (its first contribution) to the doomsday vault as scientists there fretted their own genebank’s safety following the 2011 earthquake and tsunami.

The doomsday vault is said to be impervious to nuclear war or asteroid strike, and its location on a remote island in a rich, stable European country adds security. But perhaps the vault’s greatest attribute is the arctic cold chilling its chambers of seeds.

Under power, the inner sanctum is kept at -18 degrees Celsius. Even lacking power, the seeds would remain viable for years. The permafrost acts as a natural freezer, maintaining a temperature below freezing.

The idea of collecting seeds is not exactly new. The US Department of Agriculture has been at it for over a century. Beyond saving species to maintain diversity, seed gatherers save them for their DNA. Genetic variants found in certain species, for example, confer resistance to disease or drought.

“That’s why you have to collect everything. Because just by looking at the material in a farmer’s field you might say, ‘That one’s no good. Don’t collect it.’ But you can’t anticipate what value that might have. There may be genes in that material that are gonna be of immense value in the future,” Mike Bonman told 60 Minutes when the vault first opened in 2008.

As early as the 1950s, researchers have similarly collected animal DNA. Unlike plants, of course, bringing animals back to life is still out of reach—but getting closer every year.

Although no de-extinction effort has yet been successful in animals, seeds are easier to revive. Provided proper storage, one need only thaw and plant them in the ground. 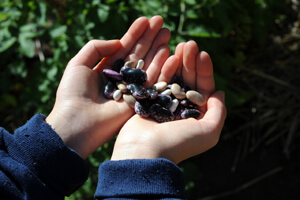 The Svalbard vault’s contents are growing at a healthy clip, adding 400,000 species since 2011. Even so, at that pace, it’ll take the better part of a decade to reach full capacity.

Those tending the vault will maintain its precious cargo as long as they have funding to do so. And after they’re gone, maybe some brave explorer on post-apocalyptic Earth, having come upon an ancient reference to the vault and its location, will make an epic voyage to restore the planet’s farmland to its former glory.

Or maybe things won’t turn out so badly, and we’ll simply have a snapshot of the world’s crops at the beginning of the 21st century—a time capsule of green, growing things.