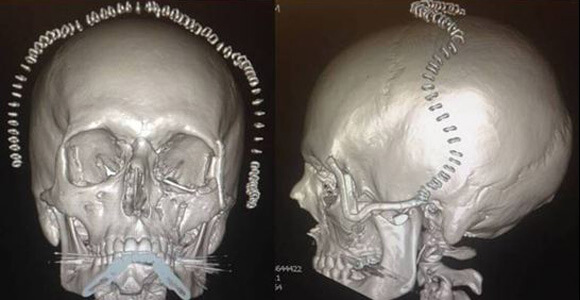 Stephen Power, a 29-year-old Welsh man who was badly injured in a 2012 motorcycle crash, underwent major reconstructive surgery on his face and now wears custom-made 3D-printed structural implants that were devised and installed using 3D-printed models of his facial bones.

3D-printed implants are still cutting-edge, but they have been used successfully a number of times. What makes Power’s case different is that the doctors also printed models to show Power what they would do and surgical guides to practice on and ultimately use in surgery to ensure that they cut and drilled in exactly the right place. They also attached printed titanium implants to the patient’s functional bone structure.

During the initial surgeries right after his accident, Power’s doctors at Morriston Hospital in Swansea, Wales, repaired a fractured skull, cheekbones and eye sockets. Because the eyes sit in a cradle of delicate bones and nerves, doctors did not reposition his drooping left eye for fear of doing further damage to it.

But doctors saw a new opportunity to take advantage of a longstanding partnership between the hospital’s Maxillofacial Unit and the National Centre For Product Design and Development Research that includes work on 3D-printed medical models and implants.

“Stephen had a very complex injury and correcting it involved bones having to be re-cut into several fragments. Being able to do that and to put them back in the right position was a complex three-dimensional exercise. It made sense to plan it in three dimensions and that is why 3D printing came in,” explained lead surgeon Adrian Sugar.

Together, surgeons and designers scanned 3D images of Power’s face and used both physical and CAD models to design the implants and guides they would use in the eight-hour surgery, shrinking the margin of error substantially.

“Without this advanced technology, it’s freehand. You have to guess where everything goes. The technology allows us to be far more precise and get a better result for the patient,” Sugar said in a news release.

3D printing also allowed them to use implants with finishes that will encourage the bones to meld with the implant. The  implants also fit more precisely than conventional metal implants, shortening surgery and recovery times.

“Previous efforts elsewhere to take it to this step have failed and so we have had to learn from those experiences. This is really the first time we’ve taken it to this stage, where everything to the very last screws being inserted has been planned and modeled in advance – and worked sweetly,” Sugar said.

Power agreed, saying he gave the results a 9 out of 10. His injured eye remains somewhat more protruded than the other, but doctors think it may settle.

The doctors expect to use similar procedures in the future, but expect that, having been through it once, the preparation will take days rather than months.

Doctors have increasingly turned to 3D-printed implants in the most difficult reconstructive cases. For instance, one man received printed implants that replaced three-quarters of his skull. Some surgical teams have also used printed practice models to fine-tune their strategy. But the use of drilling and cutting guides in at the Welsh hospital is an indication of how many other ways there may be to use precise reconstructions of a patient’s anatomy to improve medical care.