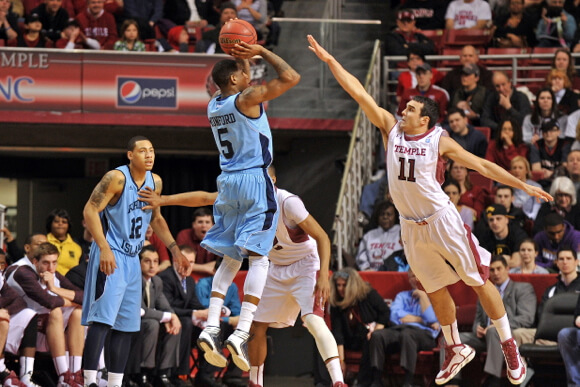 It’s late March, and the NCAA college basketball tournament is underway. Each year, millions print brackets of the 64 teams and pencil in their picks. And each year, many a bracket is fit for the trash (with the mini hoop over it) after the first round.

But theoretically, you think, if only you had enough information and the right system—you could call every game, right? Fast computers, clever software, and advanced statistics are able to make sense of data in a way humans alone never could.

All true. But even with quality data and analysis, you still only get the most accurate probability a particular outcome will happen—and that means you’ll never get perfection.

Which is why this year Quicken Loans and Warren Buffett’s Berkshire Hathaway teamed up to put a billion dollar bounty on a perfect Big Dance bracket, a feat never before accomplished. (At least, not on record.)

The offer ought to tell you just how hard this particular chestnut is to crack. Even with some college hoops IQ, you have about a 1 in 128 billion chance at perfection. Buffett, a smart guy, is no doubt resting comfortably at night.

In fact, even if someone comes close (say, perfect to the Final Four) they still wouldn’t walk away with the billion.

Buffett says he would probably offer to buy the bracket for some smaller sum, say $100 million. You’d be hard pressed to turn down that much money (or even less) with the outcome of three games undecided.

Of course, all this is also a wily advertising tactic.

Quicken makes out like a bandit, getting a barrage of press and bevy of personal information on home buyers (a requirement of the registration process) for a paltry $2 million—half the cost of a 30-second advertising spot during the Superbowl.

So, if perfection is out of reach, what about the next best thing?

Nate Silver—who correctly predicted the electoral results of all 50 states in the 2012 presidential election and the results of all but one state in 2008—is also pretty good at bracketology. (As you might expect.)

Last year, his system gave Louisville the best chance of winning at the beginning of the tournament, and Louisville did indeed cut down the nets in the end. Silver’s bracket was better than average overall, but he missed three of the Final Four teams—most notably the low-probability Wichita State.

And this year? Silver is full of cautionary caveats. On his newly launched site, FiveThirtyEight, he says, “In political prognostication, you can be regarded as a savant just by pointing out that the favorite is probably going to win.”

Sports are more exacting, and in this year’s tournament there are no heavy favorites. At 15%, Louisville has the highest probability of winning it all again. That’s some seven points lower than last year’s prospects, and said another way, it’s an 85% chance Silver is wrong.

But no one ever said this was easy. Silver’s description of his March Madness system is a sobering look into the Rube-Goldberg machine that is complex statistical analysis.

It includes a composite of five power rankings measuring wins and losses, strength of schedule, and margin of victory; adds a dash of subjective data from the NCAA’s tournament rankings and the AP’s preseason rankings; and adjusts all this with key roster events like suspensions, injuries, and travel schedules.

And the system doesn’t include everything it could. Silver notes, for example, that he doesn’t account for a coach’s post-season record. Teams coached by Michigan State’s Tom Izzo, according to Silver, do exceptionally well in the post-season, sometimes outperforming their tournament ranking.

All this is a good reminder that even in the most skilled hands, such analysis depends not only on hard data but also on assumptions and subjectively assigned weights. At the same time, it isn’t perfection, but playing probabilities is better than not playing at all.

And one more thing, if you’re filling out a last-minute bracket—and you tend to throw darts to pick teams—go here for Silver’s picks. Just…for your reference.