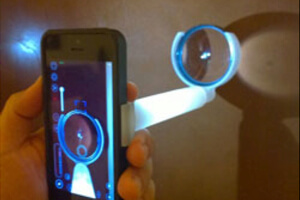 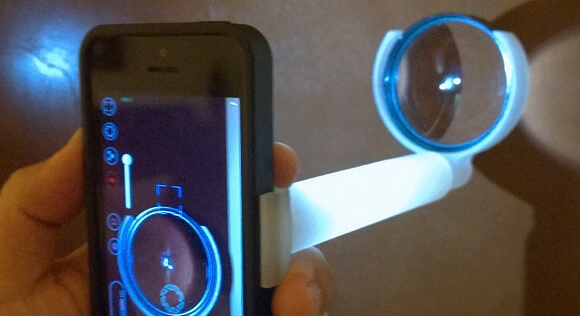 The World Health Organization estimates some 90% of the world’s visually impaired folks live in the developing world. Most suffer from correctible but undiagnosed refractive errors like cataracts.

Opthalmic equipment is big, heavy, expensive and immobile. It can be difficult or even impossible for people living in rural areas of developing countries to get to the nearest eye doctor—and the doctor can’t bring the equipment to them.

We’ve written about a few startups working the problem. MIT Media Lab’s $2 NETRA clip-on smartphone device and app, for example, can give eye tests and prescriptions for glasses. Another organization, Peek, similarly offers a clip-on, smartphone-compatible device. Beyond exams, the device can image both the front and back of the eye.

More recently, Stanford opthalmology resident, David Myung, and assistant professor of opthalmology, Robert Chang, unveiled a similar smartphone-compatible device, dubbed EyeGo, to image the front and back of the eye.

A hacker at heart, Myung whipped up early prototypes using off-the-shelf parts he mostly ordered online—caps, spacers, macrolenses, LEDs, even a few Legos. After a few rounds of tinkering, he modeled and 3D printed a run of the adapters attaching optical equipment to phone.

Myung and Chang will use cash from two seed grants to produce more adapters for research and, down the line, seek FDA guidance to make them more widely available. So far, the device costs $90 to produce, but they hope to go lower.

As startups have begun making mobile devices to measure vital signs like blood pressure, blood oxygen, and more, Peek, NETRA, and EyeGo are some of the first we’ve seen that address the eyes specifically.

Such devices may allow patients to take health measurements at home and electronically send them to their doctor, avoiding all but the most necessary office visits and keeping closer tabs on chronic conditions.

In the developing world, though most folks don’t have smartphones yet, that’s likely to change in the coming years. In the meantime, mobile health devices like these promise to allow healthcare professionals, or even assistants with limited training, to go where they’re needed, diagnose disease, and provide basic healthcare to the rural poor.