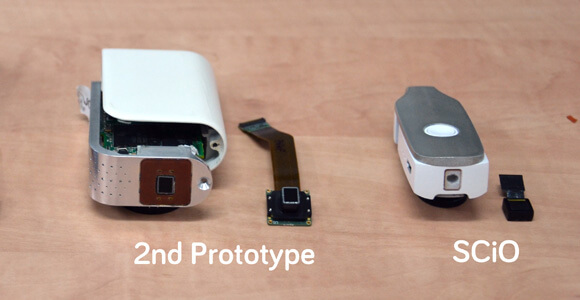 If your technology product doesn’t seem to most users like a magic trick, you’re not trying hard enough: It’s an industry adage that explains a lot of successful products. But another selling point for new technologies is pent-up demand for a capability that people can’t believe didn’t exist already. The latter describes mobile devices that provide nutritional information about the food we eat without requiring the user to enter most of it.

No one has yet publicly solved the problem of tracking calories and nutrients as we put them into our bodies. But a small number of companies are beginning to introduce handheld scanners that can detect the ingredients and calories in food on our plates by miniaturizing the technology that food scientists and companies have long used. 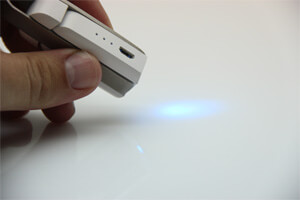 To wit, the TellSpec device we covered in December gained a competitor this week with the launch of a Kickstarter campaign supporting the SCiO scanner, made by U.S. venture capital-backed Israeli company Consumer Physics.

“These things are amazing,” CEO Dror Sharon said pointing at his smartphone in a recent demo of the SCiO scanner for Singularity Hub. “They tell you how to navigate where you are; they tell you where to be next. But one thing they can’t tell you is the stuff around you, if you’re just not sure what it is, there’s no way they can tell you.”

Like TellSpec, SCiO employs near-infrared spectroscopy to determine the makeup of food. But, after three years of work to miniaturize near-infrared technology and optimize it for a consumer audience, Consumer Physics has successfully made a flash-drive sized device, edging out TellSpec’s mouse-sized competitor. The scanner in the SCiO device is dime-sized (pictured below), and the company is clearly hoping its product will eventually end up embedded in smartphones and smart watches.

Spectroscopy works by shining light in the near-infrared spectrum into an object. All but completely opaque or transparent substances absorb part of the light and reflect the rest back. A readout identifying which wavelengths of light were absorbed is unique to each type of molecule.

But there’s some parsing (read: algorithms) required to get from the spectrum readout to a statement in English of what the scanned object is — an apple, for example — along with a set of details that are relevant to the user. For instance, most people aren’t interested in how much acetic acid is in an apple, but they might be interested in how much ascorbic acid, or vitamin C, the fruit contains.

Those details on the back-end help account for why this technology hasn’t hit the mass market yet, and SCiO and TellSpec tackle them quite differently.

TellSpec is specializing in food, building a database of food items and their relevant ingredients, including trans fats and common allergens. Users buy the device for $320 and then pay a monthly fee to access the data.

SCiO will sell for $299 and it includes continuous access to a support app. (Early supporters will get the device for half price.) But the database behind the app is bare bones, specializing in food and medicine. For instance, the device differentiated between Advil, Aleve and Advil PM in a demo. Yet, at present the app wouldn’t recognize every prescription drug.

Why medicines, you ask? Primarily, it seems, to open the door to further use cases for object-scanners that might appeal to consumers. Consumer Physics hopes to get a wider range of products in its database via crowdsourcing. The company is hoping users will scan the items in their medicine chests and refrigerators and ultimately garages, making its database bigger than what competitors like TellSpec can build in-house. And as the database includes more and more items, Consumer Physics will market access to it as an SDK for others to use to devise any number of specialized apps.

It’s hard to say which of these business models will dominate the space — a single database behind a proliferation of apps, or a number of specialized databases driving custom apps — but either way it seems likely that soon we’ll be scanning objects to see what’s in them.