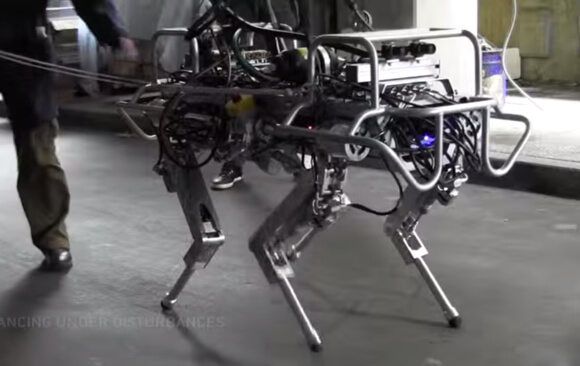 For years, Boston Dynamics has been the undisputed heavyweight champ of viral robot videos. Four-legged robots, like BigDog, LS3, Cheetah, and Wildcat were their bread and butter while two-legged bots, like Petman and Atlas, supplied wonder and fear in equal measure. But now? Boston Dynamics is no more.

The firm was snapped up in Google’s 2013 robotics buying spree, and while the team is presumably intact and working hard as ever—exactly what they’re working on is less visible. Following a consistent stream of videos, the company’s YouTube channel hasn’t been updated in seven months.

Luckily, you can still get your four-legged robot video fix elsewhere, even if none are yet quite as advanced. The Italian Institute of Technology’s HyQ, for example, is one of the most capable quadruped robots out there right now.

HyQ has multiple gaits and can adapt to uneven, unpredictable terrain (the prime benefit of legged robots over wheeled robots). HyQ’s most recent video is reminiscent of early Boston Dynamics videos. The robot traverses obstacles and automatically stabilizes itself after being smacked by a punching bag.

Meanwhile, MIT is working on an heir to Boston Dynamics’ Cheetah. The MIT bot has a smooth gait that can switch mid-stride switch from trotting to galloping and is capable of speeds up to 13 mph (about half the Boston Dynamics bot).

While Boston Dynamics’s Cheetah morphed into Wildcat and was released into the wild (parking lot) last year, MIT’s cheetah-bot is still firmly supported and tethered as it jogs on the treadmill. That said, its electric motors (instead of hydraulic actuators) approach the efficiency of a real cheetah, and MIT says it can run on batteries alone (as opposed to a combustion engine) for over an hour at a speed of 5 mph.

The Swiss Cheetah-Cub robot developed by EPFL moves unsupported without a treadmill (though it’s still tethered for power) and can switch its gait from walking to a trot. Cheetah-Cub is more diminutive—about the size of a house cat—and at 1.3 mph lacks the speed of the other robots. However, they’re working on a flexible spine to enable a third gait (gallop), which will hopefully add a little extra speed too.

Osaka University’s quadruped robot Pneupard is slow, jerky, and lacks a brain. But that’s okay. The team behind Pneupard is experimenting with a different form of actuation. Instead of using motors to move the bot’s joints, Pneupard is pneumatic—air is piped in and controlled in the muscles by onboard valves.

One benefit of pneumatic muscles, the team notes, is they deform without braking on contact with the floor, naturally adapting to changes. Such softness brings their structure closer to that of animal muscles.

I’ll admit, none of these bots get the blood pumping quite like a few of Boston Dynamics’ more notable creations. But none have Boston Dynamics’ level of funding or history (over two decades). While we expect big things from Boston Dynamics and Google (would a few videos hurt the cause?), open projects like these (and no doubt others) are more than enough to keep things fresh and moving in the wider world of robotics.