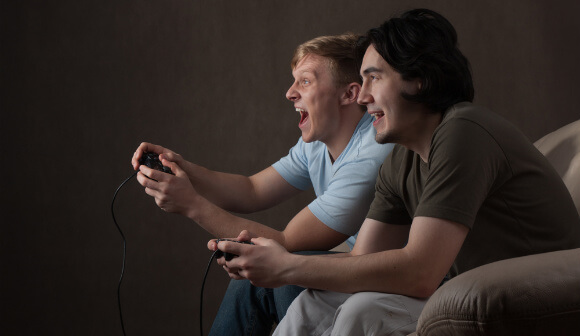 Violence is contagious, this we know. Time and again, researchers have found that exposure to aggression links directly to increases in violent behavior. This is why, for example, 30% of abused children grow up to be abusers themselves. It’s also why, as Gary Slutkin, a professor of epidemiology and public health at the University of Illinois, Chicago and the executive director of CURE Violence, recently told New Scientist: “[P]eople who have observed violence are 30 times more likely to commit it. Under certain conditions it can be up to 100 to 1,000 times more likely.”

On its own, considering what we now know about mirror neurons, this idea isn’t too startling. But what makes it more interesting is the fact that exposure to violence—especially among young men (the slice of society that is by far the most violence prone)—is now ridiculously high. Media today, in all its forms, is far more graphic, gory and outrageously violent than ever before in history.

Yet, as Harvard’s Steven Pinker has so eloquently pointed out in his latest book, The Better Angels of Our Nature, violence is at an all time low. Your chances of dying a violent death have decreased a 100 fold since the Middle Ages. War, torture, genocide, slavery, rape, pogroms and the like—all are at historic lows. In total we are far less cruel and far more peaceful than ever before in history.

But what gives? If our media is more violent than ever before and violence is contagious—with exposure to aggression being the transmission mechanism—where is this decline coming from?

Or, as Jessica Grose recently explained in Slate:

[W]hile Hollywood movies have undeniably become more violent in the past few decades, and many of them are sexist; rape and violence statistics among young people are down across the board. Reliable rape statistics are difficult to come by, because many women won’t report sexual assaults. But the Department of Justice reports that the total rate of sexual violence against females older than 12 dropped 64% between 1995 and 2005, and then remained unchanged. Overall juvenile violence has also dropped precipitously, reaching a historic low in 2011. As Vox put it recently, “Today’s teenagers are the best-behaved generation on record.” If young men were so conditioned by Hollywood to commit violence, sexual and otherwise, wouldn’t it be reflected in the stats?

How to resolve this paradox is a mystery. And a big one. Considering the impact of violence on society and the trillions in dollars of profits that violent TV shows, movies and video games command, resolving this issue has profound ramifications going forward.

As it turns out, without noticing, we may have already resolved this issue without noticing. What’s more, a truly wild idea is hidden in the resolution of this issue—one, that done correctly, might allow us to use the video games as a vaccination against violence.

To understand how this might be possible, it helps to know a little more about Gary Slutkin (the University of Illinois epidemiologist quoted above). A few years back, Slutkin noticed that the greatest predictor of gun violence is a prior instance of gun violence which, as it turns out, is exactly how infectious diseases work.

“That’s what distinguishes infectious disease,” he explains, “it causes more of itself. That’s the case with flu, a cold, or TB. On a map, violence looks like circles with high concentrations in their middles. It’s the same with cholera or malaria.”

These facts led Slutkin to wonder if an epidemiological approach to violence might solve the problem. He figured, if you want to stop a disease outbreak you need to block its ability to reproduce—which is why quarantines exist—so why not try the same approach with violence.

And retaliatory shootings—which account for one-third of all shootings—gave him a perfect opportunity to test this idea. But, instead of instituting a physical quarantine around the site of a shooting, he instead created a social quarantine—though this may take some explaining.

A bunch of new research shows that humans process the pain of social rejection in the same places they process physical pain. This makes evolutionary sense. Until about 250 years ago, banishment was another form of capital punishment. If you got kicked out of the tribe, your chances of long-term survival dropped essentially to zero.

This is why the brain can’t actually tell the difference between social fear and physical fear and why fear of public speaking—and not, say, being dismembered by a bear—continues to rank as our number one terror.

Or consider the children’s rhyme: “sticks and stones may break my bones, but words can never hurt me.” Now think about the reason we need such a rhyme. We have to consciously remind our children that insults from others are NOT a big deal (and a cause for violence), because their brain—hardwired by evolution to fear social rejection as much as physical violence—does not do so naturally.

Now back to Slutkin. In February of 2000, after a shooting in West Garfield Park, the most violent neighborhood in Chicago, Slutkin organized public responses from the community so the shooter would know that his peers disapproved of his actions (i.e. social rejection).

He then added interventions for certain high-risk individuals before an inciting incident ever occurred and then repeated this same process in the Middle East, Central America and Africa and got the same result.

Why does this work so well? It works because not only do we process peer rejection as physical pain, but we process the opposite—social acceptance—as intense pleasure.

The feelings that come from being liked by others and being connected to others are underpinned by some of the most potent feel-good reward drugs the brain can produce: dopamine, oxytocin, and vasopressin.

Let’s drill down into these neurochemicals for a second.

Slutkin’s interventions essentially taught would-be-aggressors that their violent acts would isolate them from their peers, while not retaliating for a killing (or responding to an insult with fisticuffs) would break the cycle and lead to greater acceptance. Since dopamine is released whenever we anticipate a future reward, all a shooter has to do is anticipate that future social acceptance and the feel-good drug starts to flow.

But dopamine does more than just produce pleasure, it’s also a potent social bonding chemical (alongside norepinephrine, it underpins romantic love). Oxytocin and vasopressin are also social bonding chemicals (oxytocin underpins trust, vasopressin monogamy). And once these chemical are released into the brain, the pleasure of social acceptance builds on itself, tightening bonds, making peace and love more fun that guns and war.

Even better, all of these chemicals are extremely addictive. Take dopamine. Cocaine, widely considered the most addictive drug on Earth, does nothing more than flood the brain with dopamine. What this means is that the rush that comes from greater peer-acceptance builds on itself—it becomes a self-reinforcing feedback loop.

As a final point, there’s a bevy of new research showing that oxytocin—besides boosting mood and increasing feelings of trust—also acts as a dopamine agonist, blocking the brain’s reabsorption of the chemical and heightening the high.

In short, what Slutkin discovered is an extremely powerful technique for using addictive neurochemistry to break down aggression. And this brings us back to our original question—why aren’t violent video games making us violent?

Well, two overlapping possibilities come to mind. First, all video games produce dopamine. On it’s own this is what makes video games addictive. But today, a huge number of these games are multi-player and social games, so this dopamine is being produced in the company of others. In other words, it’s reinforcing social bonding and this may be acting as an antidote to the contagiousness of violence.

Moreover, another additional possibility is that after this happens the games themselves might be acting as a killed virus vaccine. In other words, playing more Grand Theft Auto might actually lead to less grand theft auto.