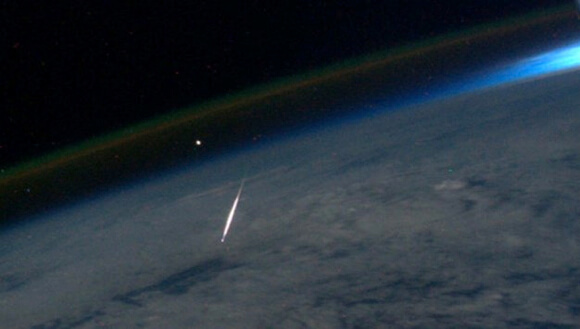 Forget Armageddon, says Ed Lu. Forget sci-fi space shuttles. Forget burying nuclear bombs in comets. Forget all that. Asteroids are a real and potentially existential threat. But if we find them early enough, they’re fairly easy to deflect. With years or decades, instead of months or days, a small nudge is all you need to make them miss Earth.

Lu is a former astronaut and CEO and cofounder of the B612 Foundation. B612 is building the first privately funded deep space telescope. Called Sentinel, the telescope will find and map the million near-Earth chunks of space rock we know nothing about.

We don’t want to be the dinosaurs, Lu says, and that particular “cosmic reset” is only the best known. There have been others. The Earth has more craters than the Moon, but they’re hidden by water and plant life or wiped clean by geologic processes.

In the grand scheme, impacts are pretty common. Impacts like the Tunguska event in 1908 when a suspected asteroid flattened 1,000 square miles of forest in Siberia. Or last year, when a smaller asteroid detonated with a force equivalent to some 440 kilotons of TNT over the city of Chelyabinsk, Russia shattering windows and frightening residents.

In the last decade, the Nuclear Test Ban Treaty system to detect atmospheric nuclear weapons tests hasn’t heard a single bomb blast—but it’s recorded scores of asteroid explosions. B612 made an animation of 26 of these from 1 to 600 kilotons. (The atomic bomb that destroyed Hiroshima in 1945 was 15 kilotons.)

Most of these events were too high to do serious damage, but they show how often near-Earth asteroids hit. Tunguska was a multi-megaton blast, bigger than the most powerful atomic bombs in existence. Tunguska was a hundred-year event, and there’s a 1% chance of a bigger 100-megaton impact in our lifetime (or 0.01% in any given year).

But when it comes to guarding against an asteroid that could level an entire city or more, Lu says, we’re trusting to dumb luck. “The first notice you get is a flash in the sky and a sonic boom.” How’d NASA learn about Chelyabinsk? Twitter.

Though Sentinel will focus on larger, more dangerous asteroids, it will also detect some Chelyabinsk-sized objects. And NASA’s upcoming ATLAS system of small telescopes will provide advance warning for some (but not all) such strikes, so folks can evacuate or at least stay away from windows.

Even so, there’s yet a lot more work to be done.

Scientists have only cataloged about 10,000 or 1% of all near-Earth asteroids. It’s estimated we’ve mapped about 90% of the biggest, extinction-level threats. But 10% are missing in action, and we know nothing of the million or so smaller but still immensely destructive asteroids that could take out an area the size of a state or city.

At the current pace, it would take a thousand years to find them all.

Part of the problem is that the telescopes on the ground or in Earth orbit have a limited view. And asteroids are the color of charcoal. The proverbial needle in a haystack—only the needle is black, the hay is black, and the stack is the size of the inner solar system.

There’s a relatively straightforward solution, however. Station a telescope near the orbit of Venus to expand its view, turn away from the glare of the sun, and look in the infrared, where the heat of an otherwise dark asteroid makes it easier to spot.

This is precisely the strategy behind B612’s $450-million Sentinel telescope. The project is well underway and boasts a talented roster of deep space mission veterans. Ball Aerospace, the firm behind the Kepler Space Telescope and the optics in the James Webb Space Telescope (among other projects including Hubble), will build Sentinel.

Lu says the project’s firmly in the “screw level” phase, and raising additional funds—the nonprofit depends on philanthropic contributions—is the most urgent need.

Provided all goes to plan, Sentinel will launch on a SpaceX Falcon 9 rocket in 2018. The telescope will assume a Venus-like orbit and, looking back to Earth orbit, make repeated infrared observations of the sky in search of moving objects. The data will be sent to Earth, compiled in a public database, and used to calculate asteroid orbits.

According to B612, Sentinel could find over 20,000 new asteroids in its first month—more than all those found in the 30 years we’ve been looking. Over its 6.5-year mission (and it could be longer), the team believes they’ll discover and catalog 90% of all asteroids bigger than 140 meters and many smaller asteroids down to 30 meters.

Technically, this is all within our scope. So, why don’t we already have a telescope up there? For one, there’s little political will to publicly fund such a project.

Perhaps there’s a perception the risk is too low to warrant the cost. Even if we get a big strike in the next 100 years, what are the chances said impactor will hit a city? Urbanization is concentrating the majority of the Earth’s population on a relatively small fraction of its surface area—making the likelihood of a direct strike seem remote.

This kind of thinking frustrates Lu.

It’s like playing a cosmic game of Russian roulette with nuclear warheads—when it’s relatively easy for us to check the chambers. Further, urbanization may decrease the odds of a direct hit, but it also raises the cost in lives, knowledge, and culture should the worst happen. Also, there may be as yet unobserved global threats out there.

There are potential fringe benefits too—a detailed map of the inner solar system could allow future manned mission to “live off the land” by mining asteroids for resources.

But what about that huge price tag? To scale, it’s more reasonable than it seems. While working at Google, Lu gave a talk about asteroid hunting. Someone approached him after and asked about the expense of an asteroid spotting telescope.

Lu told him it would probably cost NASA around a billion dollars but could be done privately for a fraction of that. “Why don’t you just build it yourself then?” the fellow asked. After all, he said, he was donating to the new wing of the San Francisco Museum of Modern Art. The total cost of the project? $450 million. A light went on in Lu’s brain.

If it’s possible to raise $450 million (now almost $570 million) for museum improvement—surely he could raise that much to save the world.

There’s more specific precedent too. The Thirty Meter and Giant Magellan telescopes are privately funded for over a billion dollars each. Big donors exist. A million people giving $100 would pay for a big chunk. Giving less works too. Pennies add up.

Ultimately, Lu’s passion for Sentinel stems from a perspective few human beings have had the privilege of gaining—gazing down on Earth from orbit. Up there, Lu says, you start to see people less as passengers on spaceship Earth, more as crew members. For the first time, a terrestrial species can do something to prevent cosmic catastrophe.

“Instead of just predicting the future, we’re going to change the future,” Lu says. “From here on out, life on Earth is not subject to this random Ctrl+Alt+Delete.”

Visit the B612 Foundation website to learn more or support Sentinel’s mission to observe, map, and mitigate the threat of near-Earth asteroids.