Strange Bacteria Dine on Electricity and Link Up to Form Biowires 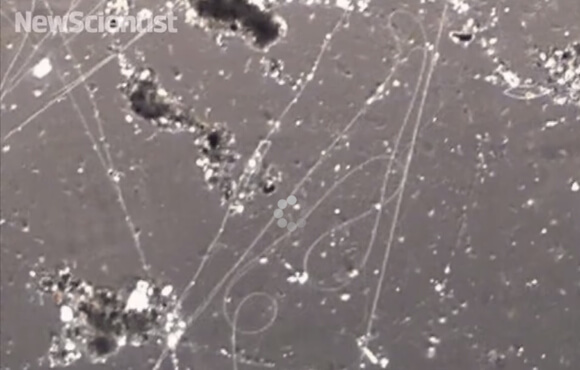 All living organisms need energy. Most animals get their energy by eating other organisms. Plants manufacture energy from sunlight. Now, scientists are finding a strange form of bacterial life that dines on unadulterated electricity.

But the fact the bacteria live on electricity isn’t the weird part.

We all fundamentally live on electricity. Whereas, human metabolism is a complex dance shuttling electrons between sugar and oxygen—the bacteria cut to the chase, eating and excreting electrons. In their research, UCLA scientists Kenneth Nealson and his PhD student Annette Rowe have found eight types of electric bacteria.

“This is huge,” says Nealson. “What it means is that there’s a whole part of the microbial world that we don’t know about.”

To study the bacteria, researchers scoop up seafloor sediment, insert a pair of electrodes, and establish a voltage that differs from the natural voltage in the sediment. When present, the creatures form a current between the electrodes.

The bacteria are not only able to consume electricity, they can also pass it along to each other by forming wires in the sediment. One bacteria reaches out to the next to make a chain along which an electric current travels.

While the bacteria don’t require energy-rich nutrients (like sugars) or other organic carbon molecules to grow, they do need trace elements like phosphorous, sulfur, and nitrogen—this is akin to photosynthetic organisms, substituting electricity for light.

Nealson told us, “In the same way that photosynthetic bacteria or algae need only sunlight—they use the energy of the photons to reduce carbon dioxide to sugars, and go from there—our bacteria use the energy of electrons from the electrode to power the reduction of CO2 to sugar.”

The existence of such creatures is fascinating in its own right. It’s yet another example of life getting creative, learning to live in all kinds of environments. But the bacteria may also prove prove useful in an engineering sense.

It’s thought bacteria might be used to clean up oil spills or other toxic messes without need for an external source of energy. And perhaps much further down the line, such creatures may inspire biomimetic designs for machines built on the nanoscale.

In The Singularity Is Near, Ray Kurzweil notes: “Bacteria, which are natural nanobot-size objects, are able to move, swim, and pump liquids.” Bacteria may serve as blueprints for nanobots manipulating nanoscale systems, or, as Kurzweil later points out, they might be used in fuel cell to produce electricity from sugar.

Electric bacteria might be used to form networks of biowires or show how nanomachines can operate without an onboard power source—that is, like the bacteria themselves, the nanobots might draw power from their immediate environment.