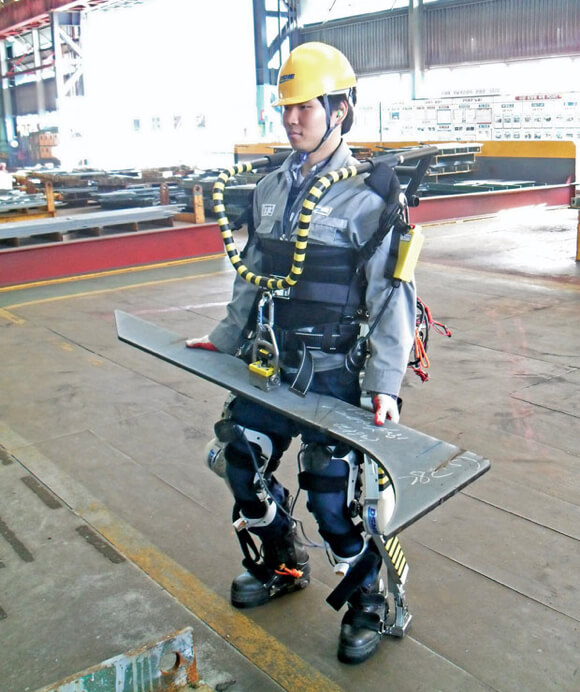 It started long ago, the merger of man and machine. Power looms for hands, cars and trains for legs, and recently, computers for memory. Now, as robotic suits approach practicality, we’re climbing inside our machines and gaining awesome powers.

Gilwhoan Chu, an engineer at Daewoo Shipbuilding and Marine Engineering, is testing a robotic suit (or exoskeleton) for workers in the firm’s shipyards. The suit’s hydraulic and electric actuators make 30 kg lumps of metal feel light as a feather.

Workers standing anywhere between 160 cm and 185 cm tall can step into one of the exoskeletons by fastening their feet, thighs, waist, and chest to it with a series of straps. The self-supporting suits are made of carbon, aluminum alloy, and steel and have been engineered to closely shadow a worker’s movements for normal mobility.

Maybe the most impressive feature of the Daewoo suit is its reported battery life—three hours of untethered use delivered from a backpack power source. According to Chu, those testing his exoskeleton were happy with its performance but uniformly asked to speed up its operation and increase the weight it can lift.

It’s common to associate industrial robotics and automation with automotive manufacturing. But the shipbuilding industry has equally embraced robots.

According to a 2012 US Navy study, over 80% of shipyards belonging to the world’s top three firms employed robots. In a particularly advanced example, robots were cutting and grinding steel, polishing finished hulls—and doing 68% of the welding.

Getting a robot to do a simple, repetitive task is old hat. But training them to work autonomously in chaotic and unpredictable environments is still a huge challenge. That’s where exoskeletons may be a useful intermediate step—combining human brains, balance, and mobility with a robot’s mechanical brawn.

Raytheon and Lockheed Martin, for example, have worked on prototype suits. Applications range from aiding heavy lifting in military or industrial settings to allowing folks with disabilities to stand and walk again. Although practical use of robotic exoskeletons is still limited, they may soon find a permanent home at Daewoo.

Chu’s team is already improving their early prototype for use in the shipyards. Enhancements include better navigation of inclines, declines, and slicks surfaces and refined handling of twisting and turning movements. And of course, more weight. Chu says, “Our current research target of the lifting capacity is about 100 kilograms.”