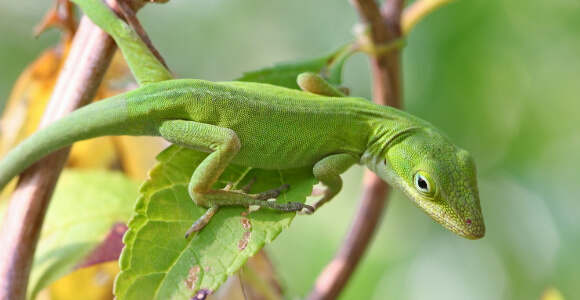 For people who’ve lost a limb, advances in materials and 3D printing have produced a slew of new prosthetics that deliver greater mobility, custom fitting, and sleek designs. Yet the ability to completely regrow a lost limb remains daunting, despite the growing research on limb regeneration in reptiles, amphibians, and fish.

Now a team led by researchers at Arizona State University have take a significant step in understanding the process of tail regeneration in green anole lizards.

When lizards lose their tails, at least 326 genes (302 of which are also in humans) are activated over the course of regeneration. These genes are involved in the process of embryonic development, would healing, and hormone response. Additionally, genes triggered in the regeneration of a lizard’s tail are in the ‘Wnt pathway’, which also controls stem cells in organs such as the brain and blood vessels.

“Lizards form a complex regenerating structure with cells growing into tissues at a number of sites along the tail,” said co-author and graduate student Elizabeth Hutchins.

After the tail has fallen off, a scab forms on the wound and cells begin to divide underneath it. Satellite cells (a form of stem cell) regrow muscle tissue as new skin, blood vessels, and cartilage regenerate as well.

After the 60 days of regrowth, the new tail isn’t identical to the original. Instead of a spine, a hollow cartilage tube now makes up the internal structure and the muscle groups are distinctly different.

The results were published recently in PLOS ONE.

While complex, the hope of course is that by unraveling the mechanism of tail regeneration, a method for regenerating human limbs might be revealed.

“Lizards basically share the same toolbox of genes as humans.” stated Professor Kenro Kusumi, who led the study. “[They] are the most closely-related animals to humans that can regenerate entire appendages.” He added, “By following the genetic recipe for regeneration that is found in lizards, and then harnessing those same genes in human cells, it may be possible to regrow new cartilage, muscle or even spinal cord in the future.”

While the reality of human limb regeneration is in the distant future, prosthetics will likely continue to become more advanced and smarter as they become less of a medical device and more of a cybernetic enhancement.

With enough success, the research on limb regeneration might ultimately prove more useful in the generation of new kinds of limbs for people, a future that even sci-fi authors struggle to imagine.