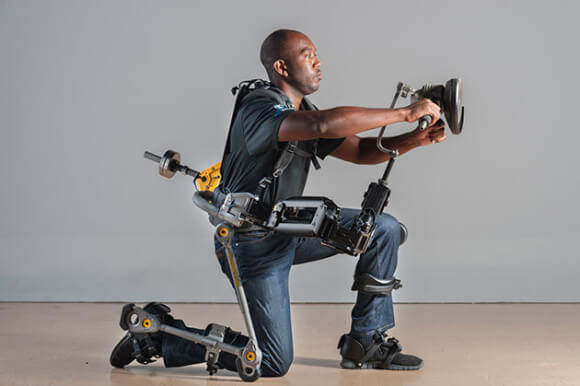 Exoskeletons have made news in recent years for creating super-soldiers and allowing wheelchair users to walk again. Now, the US Navy will test and evaluate Lockheed Martin’s FORTIS exoskeletons for industrial applications at Navy shipyards.

FORTIS is a lightweight, unpowered exoskeleton which can support tools of up to 36 lbs. It works by transferring weight away from the user’s body to the ground. For physically demanding jobs, like those of naval shipyard employees, this type of physical augmentation can bring an enormous boost in productivity.

Tests have shown that FORTIS increased productivity of workers using heavy hand-tools anywhere from 2 to 27 times, depending on the activity. Without this augmentation, on average, a worker could hold a 16 lb grinder overhead for three minutes. With the exoskeleton, operators worked for 30 minutes and longer without needing to rest.

Tools mount to the front, and the weight is directed through the suit’s joints and down to the floor. This design relieves stress on the whole body, including the feet and ankles. The exoskeleton has joints at the ankle, knee and hip and is flexible at the waist—flexible enough for the wearer to climb stairs and squat. It appears relatively easy to put on too.

Though FORTIS is a simple design, sometimes simpler is better. That said, it isn’t, perhaps, as exciting as robotic exoskeletons we see in movies—but those are coming too.

Lockheed’s other exoskeleton, the HULC, is hydraulic powered, supports up to 200 lbs and is designed to be used on the field, during battle. And the US Army is developing its TALOS suit—a climate controlled, armored, powered, full-body exoskeleton complete with heads up display. (The latter won’t likely appear in full for several years at least.)

Of course, it needn’t be all about visions of war. The scaled down FORTIS may prove useful in private industrial settings too. Indeed, Lockheed hopes to see other non-military use in mining and construction in the near future. And they aren’t the only ones. 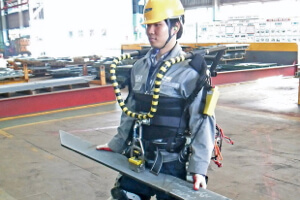 Daewoo, one of the top three shipbuilders in the world (along with South Korean giants Hundai Heavy Industries and Samsung Heavy Industries), began testing robotic exoskeletons at their facility in Okpo-dong last year.

Indeed, South Korea is no stranger to efficiency boosting technology and automation. A 2012 study prepared by the US Navy of the South Korean firms’ facilities found that five out of six shipyards they visited used robots in some capacity.

“At the time, most of the yards we toured were significantly more advanced in robotic welding than the US yards performing naval ship construction, and had been for a long time,” said Gene Mitchell, a retired US Navy officer.

Unlike the FORTIS, the Daewoo exoskeleton is powered and limited by a three-hour battery life. Hydraulic joints and electric motors run up the outside of the legs to a backpack, which controls the rig. The suit allows workers to walk at a normal pace and to lift objects up to 66 lbs. In addition to boosting lifting ability, the suit helps workers move heavy objects with more precision.

While there are already exoskeletons on the market helping wheelchair users walk, we may also see more industrial applications as the technology develops. Eventually, robots might take every physically intensive job in a factory—but for the moment, augmented human workers may more easily do jobs that even the most advanced factory robots can’t yet handle.