Imagine a world where your outfit makes more than a fashion statement.

Thanks to miniaturization and state-of-the-art integration of electronics, smart clothing is a burgeoning new space in which sensors are now fixed, woven, and embedded into everyday wear. Hap Klopp, founder of North Face, says, “Fabrics will generate more data than devices in the next 10 years.” Many analysts estimate large-scale adoption by 2020.

That may sound aggressive. Most of us don’t have a single smart shirt, never mind a closet full of them. Further, most wearable technology so far is of the sort you put on your wrist or face.

What makes clothes so different from other wearables?

Though a slew of smart watches and wrist-worn devices—from the Apple Watch to the FitBit—provide users valuable insights, they’ve had difficulty monitoring important biometrics like heart health and respiration; this is where clothing comes in.

Weaving in conductive fabrics at key locations on the body allows sensors to detect electrical impulses from the heart and muscles. Raw data is parsed through several algorithms, which then present accurate estimates of cardiac activity, muscle burn, and much more on your mobile device.

Moreover, there’s a psychological component at play—how hard is it for us to pick up the habit and remember to wear an accessory? With clothing, we can seamlessly integrate sensors into something we aren’t likely to leave the house without.

Someday, more clothes might come stock with sensors, but early on, expect specialty items for niche uses, like athletics. My company, Sensilk, for example, is refining a female sports bra and has begun development of a male performance shirt. 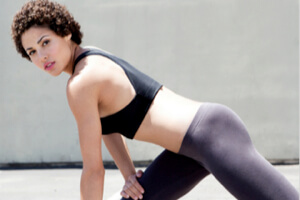 We’ve combined patented conductive fabrics, a Bluetooth Low Energy sensor, and our mobile app to provide the everyday individual with real-time biometric data. GPS tracking aids route setting while audio feedback updates you on your workout goals. The ability to analyze respiration, caloric burn, fitness level and more gives wearers actionable information on their fitness before, during, and after their workout.

We’re excited about our product—but athletics is just the beginning.

We might even link such information to digital health records. Instead of recording a few vital signs once every few years, clothing-based sensors might provide a daily, hourly, or even real-time record of key health information for our physicians.

A current example of where wearable data meets the healthcare industry is in the diagnosis of heart palpitations and other cardiac abnormalities. Many cardiac readings show up negative during a patient’s short stay—but with the majority of one’s time spent outside of the office visit, disaster could strike at any moment.

The current solution is a wearable device called a Holter monitor. Individuals with arrhythmia (irregular heart patterns) wear the device at home to pick up abnormal readings. Useful? Yes. The problem is it’s bulky, heavy, and uncomfortable. 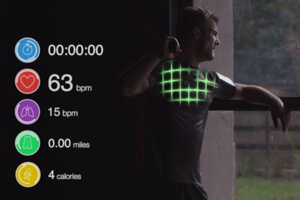 Soon we’ll remove that tangled mess of wires, battery pack and adhesive backings and add in a flexible, fashionable article of clothing with batteries that can last over a year.

All this isn’t to say the road to smart clothing will be straight and narrow.

The clothing industry is extremely fragmented with ruthless competition between price points. Only when fabric and consumer electronics supply chains are merged will the cost of these products become competitive relative to regular clothing. Also, regulatory barriers in healthcare present a significant challenge, and sensitive health data will need to be securely communicated and stored.

But these are by no means insoluble problems. And as smart clothing gains momentum—the industry could become rapidly wider, deeper, and more connected.

Entrepreneurs and designers could collaborate on cross-brand apparel software synthesizing data from various clothes and accessories, forming an elaborate electronic profile of one’s quantified self. This profile could be shared with doctors and healthcare providers via a bounty of specialized apps in a vibrant digital marketplace for clothes.

Local emergency systems could be automatically alerted if a user is in critical condition. Or on a grander scale, GPS maps could be generated during war, pandemics, and natural disasters to show areas in dire need of medical attention—perhaps even providing predictive powers.

Before we know it our closets may be wireless charging docks for smart outfits, and both clothing and accessories will communicate with our world to literally open doors, start cars, and even end calls with simple hand gestures.

We’re not there yet. First, athletic applications. Then health. From there? Sky’s the limit.