How will you positively impact billions of people?

At Singularity University, this question is often posed to program participants packed into the classroom at the NASA Research Park in the heart of Silicon Valley. Since 2009, select groups of entrepreneurs and innovators have had their perspective shifted to exponential thinking through in-depth lectures, deep discussions, and engagement in workshops.

Yet in that time, only a few thousand individuals from around the world have had the opportunity to transform SU’s insights on accelerating technologies into cutting-edge solutions aimed at solving humanity’s greatest problems. But not anymore.

Today, Singularity University launches a new, open portal called SU Videos, which will include a host of free videos spotlighting the various activities occurring on campus and throughout the greater global SU community. 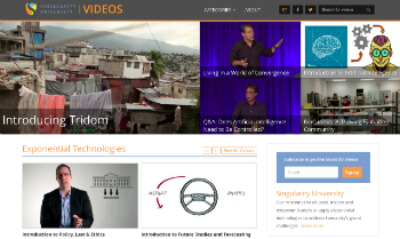 Each week, at least two new videos will be released from on-site events like the Executive Programs and the 10-week Graduate Studies Program as well as worldwide events, such as the Exponential Conference series and SU Summits. Additional offerings will include faculty, speaker, and alumni interviews along with inside looks at SU Labs, including the upcoming accelerator.

Together with Singularity Hub, this new portal further expands Singularity University’s commitment to providing publicly accessible content on the latest technological breakthroughs and growing a thriving online community passionate about leveraging technology to impact the world.

Let’s take a look at the programming available on SU Videos.

Singularity University is known for profiling world-class experts and entrepreneurs from across a broad range of domains, and the core of these speakers are the academic track chairs and core faculty. At each program, faculty provide up-to-date snapshots of the progress being made in science, technology, and related domains while framing where exponential growth is taking  in the near future. Here’s a clip of Peter Diamandis explaining in more detail how an abundant future is possible through technology:

As world-class speakers give talks at SU programs and events, they have the opportunity to engage one-on-one with participants. It’s often in these chats that core insights are conveyed. To capture these perspectives, SU Videos will feature interviews that delve deeper into specific topics.

At last year’s Exponential Finance Summit in New York, Staci Warden of the Milken Institute took the opportunity to talk about the disruptive power of bitcoin:

The current pace of technological change and disruption is mind boggling, and it only promises to accelerate. Frequently, participants at SU must shift their point of view rapidly in order to fully appreciate the depth and scope of what they’re hearing and seeing. This raises questions, some very simple and others deeply profound.

At the Executive Program in October of 2014, one participant wondering when computers will become conscious posed this question to Ray Kurzweil, who has been wrestling with this question for decades and wrote The Age of Spiritual Machines in 1999.

Singularity University seeks to educate, inspire, and empower entrepreneurs to impact billions of people, and one of the best ways to take an idea and successfully transform people’s lives is through launching a company. SU Labs was launched to incubate companies leveraging exponential technologies to tackle some of the greatest challenges facing the world today.

As new companies are formed as part of the Graduate Studies Program or from alumni, the new video portal with showcase these startups, giving a behind-the-scenes look at the individuals, their motivation behind their efforts, and the specific problems they are tackling.

This is just a taste of the programming that the new video portal will provide.

So if you’re passionate about changing the world through technology, be sure to sign up for the SU Videos newsletter to stay abreast on the latest from Singularity University and its community across the world.