Food and agriculture accounts for about 5.9% of the global GDP. Global food retail sales alone account for about $4 trillion/year, and food accounts for 15% of what American households spend each year.

It is an industry ripe for disruption.

While this arena will change dramatically, we forget how much food has changed already over the past two centuries. In 1790, farm jobs accounted for 90% of US jobs, compared to less than 2% today. 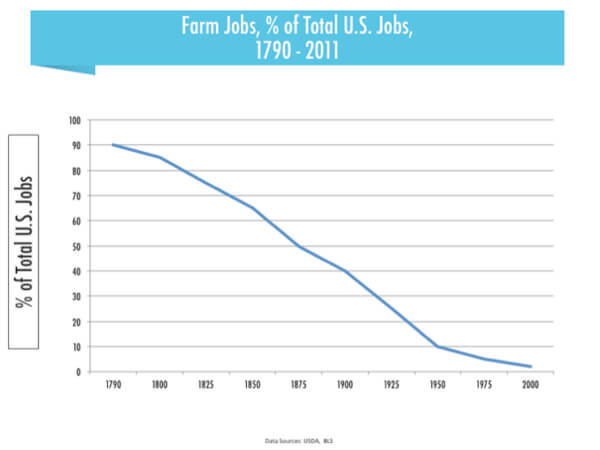 And while we’ve lost farming jobs to automation, the global food supply (per capita) has steadily increased. 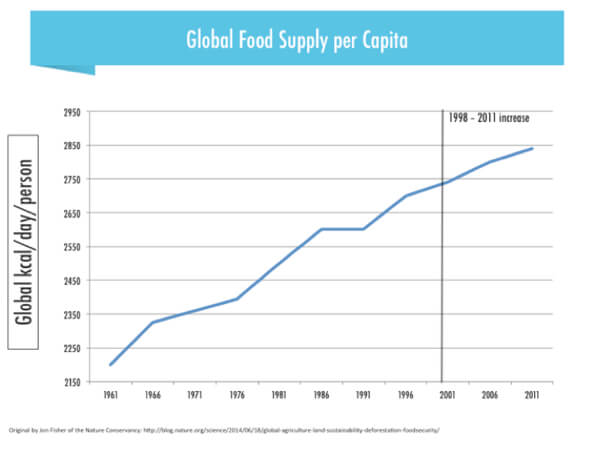 As we move towards a world of food abundance, let’s look at a few of the fun areas of transformation and entrepreneurial opportunities.

Lab-Grown Meat Products: Modern Meadow is a Singularity University company that uses tissue engineering to grow cultured animal products in a lab, including leather and food. Though the latter will be grown using animal cells—they won’t be meats in the conventional sense, but something altogether new.

Their vision is to do this at scale and dramatically reduce the environmental impact of meat production. In 2012, it took 60 billion land animals to feed 7 billion humans. If successful, cultured animal products have huge advantages: 99% less land, 96% less water, 96% fewer greenhouse gases, and 45% less energy. 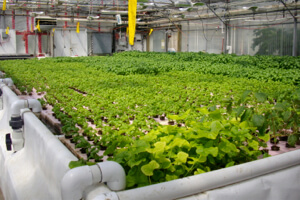 Vertical Farming: We will grow our food in AI-controlled vertical buildings, rather than on horizontal land.

Vertical farms will be immune to weather, so crops can be grown year-round under optimal conditions. One acre of skyscraper floor produces the equivalent of 10 to 20 traditional soil-based acres.

Employing clean-room technologies means no pesticides or herbicides, so there’s no agricultural runoff. The fossil fuels now used for plowing, fertilizing, seeding, weeding, harvesting, and delivery are gone as well. On top of all that, we could reforest the old farmland as parkland and slow the loss of biodiversity. Companies like FarmedHere, Green Sense, and groups like MIT’s CityFARM are making strides in the field.

Food Production Closer to Home: The average American foodstuff travels 1,500 miles before it’s consumed. As 70% of food’s final retail price is from transportation, storage, and handling, these miles add up quickly. With vertical farming and genetic engineering, production will become decentralized and distributed, allowing food to be produced nearer the location of consumption, and food’s price to plummet.

Plant-Based Meat Alternatives: Beyond Meat and Hampton Creek Foods are companies turning plants into foods that look and taste just like meat and eggs. Hampton Creek’s data scientists are actively weeding out billions of proteins from hundreds of thousands of plants to learn what could form the equivalent of a chicken’s egg. The company is seeking to create the largest plant database in the world.

3D Printed Food: Companies like 3D Systems, Natural Machines, Print2Taste, and others are experimenting with 3D printed food. While 3D printing in chocolates and sugars is well underway, we’ll soon see 3D printed starches, proteins (and even new proteins like algae and insects) and spices.

Personalized Nutrition: Our genome, microbiome, and even our blood type determine how we respond to certain foods/nutrients. Imagine if a 3D printed meal was custom produced depending on the amount of exercise you had that day and your vitamin blood levels. Advanced biosensing will drive your diet and close the loop.

AI-Designed Recipes: IBM’s Watson uses machine learning to construct new recipes and cocktails that no human chef would come up with.

This algorithm matches foods based on extensive taste profiles and the chemical makeup of edibles in their database. We tried a few of Watson’s cocktails at last year’s A360: Hoof-n-Honey Ale (veal stock, grilled beef and IPA), Plum Pancetta Cider (bacon and cider), and Corn in the Coop (old fashioned with chicken).

Food for Fuel, Not Pleasure: For those that opt-in to optimize their consumption (often at the expense of “taste”), we will have mixtures that will provide us with exactly what our bodies need in terms of nutrients, carbohydrates, protein, and more. Companies like Soylent and Ambronite are already doing this. These options will be cheaper and faster than traditional consumption practices — and they will feed many who don’t have access to food at all.

Food On Demand: Press a button and food will be at your doorstep in minutes. According to PitchBook Data, firms delivering groceries and meals in the Bay Area attracted funding to the tune of $433 million in 2014—a marked increase from 2013 ($68 million) and 2012 (just $21 million). Companies like Uber Fresh, Munchery, and others deliver high-quality, restaurant and chef-prepared food to your door on demand.

How are you going to capitalize on the changing food economy? As technology converges, the future will be a tasty, and abundant, one.