For fans of flesh-and-blood feats of strength and agility, last weekend was heaven. Added to the NHL playoffs and NBA finals, race horse American Pharoah took the Triple Crown for the first time in 37 years. But our eyes were on competition of a distinctly nonbiological nature—the Darpa Robotics Challenge (DRC) finals.

The DRC finals took place on Friday and Saturday (June 5 and 6) in Pomona California in front of thousands of fans. The robots were asked to navigate an eight-task course simulating a disaster zone—tasks included driving alone, walking through rubble, tripping circuit breakers, turning valves, and climbing stairs.

Why these particular tasks? Darpa organized the DRC in response to the Fukushima nuclear disaster in which radioactivity prevented workers from shutting down critical systems. A robot might serve as surrogate in such situations, but it would need to manipulate tools and operate in a chaotic environment.

Though they continue to improve at a rapid pace, none of these tasks are trivial for today’s robots.

Most of the DRC robots competing were either bipedal—walked on two legs like us—or used a combination of walking and rolling to move between tasks. To replicate a disaster zone, communications with human handlers, a few thousand feet away, were spotty. Therefore, the robots were only partially controlled. The rest of the time, they had to work things out for themselves autonomously.

Though most of the teams accomplished tasks at a glacial pace, a number of dramatic falls kept things interesting (see video below), and the crowd cheered the bots on. Three teams completed the course, each scoring eight points and separating themselves by speed of completion.

What did we learn? In complex environments, robots are still slow and clumsy, yes, but also they’re more resilient than expected. Additionally, the DRC was designed to push teams to the limits of today’s technology. And it’s notable that three teams—and incidentally, three different designs—completed the course. That’s better than the Darpa Grand Challenge in 2004 in which no self-driving car came close to finishing.

Below is a great Darpa infographic outlining the evolution of robots over the past few decades and where we’re headed in the next few—and then videos of DRC robots falling, getting back up, and moving at 20x. 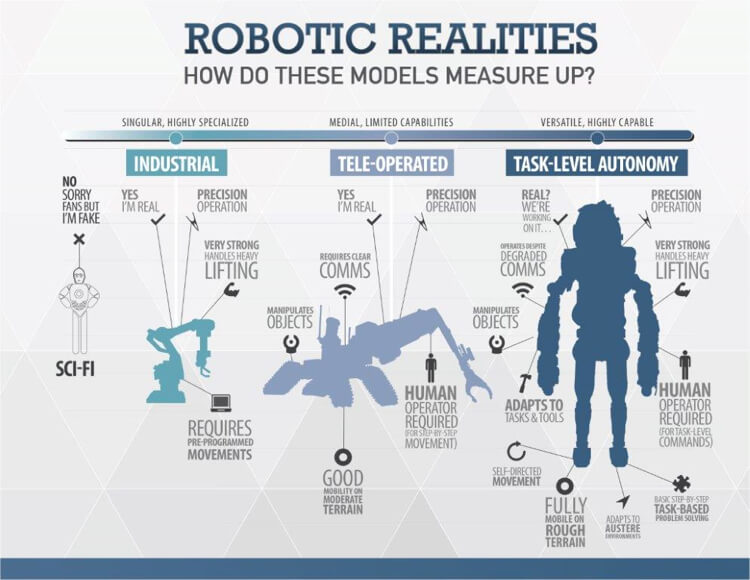 These robots aren’t cheap. In the lab, you’ll often see them walking around in a harness to prevent damage in case of a fall. Getting in and out of a car, moving through a door, even just walking—all these activities require the robot sense, plan, and move. What’s easy for us is hard for them. As no protection was allowed at the DRC—by the second day, when teams got less conservative, the bots started dropping.

…and Getting Back Up

Though many fell, the good news is many (not all) were able to continue. By all accounts, the most captivating moment was when CHIMP lost its balance walking through a door.

Whereas most of the other robots required their human handlers and a gantry to lift them back up, CHIMP got up under its own power. It wasn’t a completely autonomous move—CHIMP’s operators remotely re-positioned its limbs to allow it to flip over onto its stomach.

However, once in position, CHIMP was able to autonomously regain its feet and continue on. IEEE Spectrum’s Evan Ackerman, who saw it live, wrote, “It’s one of the most inspiring displays of robotics that we’ve ever seen. Ever.” The fact these falls weren’t showstoppers across the board is important. Robots operating in disaster scenarios will fall, and so they’ll have to get back up.

About the Glacial Pace

Why so slow? As Brad Templeton noted in a blog post, the robots were more often than not remote controlled. This meant sending data to the control room, the human operators deciding what to tell the robots to do, and then sending instructions back. The loop slowed things down considerably.

Robots like these won’t be completely autonomous for awhile. But as they do gain more autonomy—due to additional advances in sensors, computing, and artificial intelligence—they’ll speed up.

Another contributing factor is that walking upright is still a really hard problem in robotics.

In an interesting twist, the top bot was a hybrid—half bipedal, half wheeled. This makes sense. We know wheeled robots well. They’re easier to build and move around. But when the going gets tough, up stairs or over uneven terrain, for example, a legged robot is superior. And there’s room for even weirder designs.

The jury’s still out on whether bots designed like us make the most sense or something more unique wins the day. A likely scenario is that it’ll be largely situational and designs will proliferate.

The slow pace (and the falls) had folks cheerfully noting we need not fear our robot overlords just yet.

And while that’s certainly true, it also reminded me of a quote from Harvard’s George Church, famed for his work in synthetic biology, “Many revolutions look irrelevant just before they change everything swiftly.” The robot revolution may look irrelevant today, but a decade from now? We’ll see.

In any case, sample a speedier future with video of the DRC champ completing its run at 20x.