Interview: Nonny de la Peña “Godmother of VR” on How VR Will Transform News and Journalism

Nonny de la Peña has been called “The Godmother of Virtual Reality.” Facebook’s acquisition of Oculus may have spawned a VR goldrush among tech giants and start-ups alike, but Nonny de la Peña was in the action well before all that happened.

In 2012, de la Peña debuted her first VR experience, Hunger in LA, the true story of a diabetic’s collapse due to starvation while waiting in line at a food bank in Los Angeles, at the 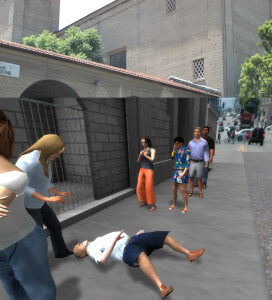 Then unknown intern Palmer Luckey accompanied de la Peña to Sundance with a prototype Oculus Rift. It was when people began taking off the cobbled-together headset with tears streaming down their faces, that de la Peña and Luckey knew they had something special in their hands.

Today, her company, Emblematic Group, is pioneering a new form of journalism that seeks to give people the most immersive experience of news stories available.

We got to sit down together at this year’s Silicon Valley Virtual Reality Conference and talk about the future of journalism in VR, how VR can help create an educated global citizenry, and the strange phenomenon of “duality of presence,” the feeling of being present in virtual reality and real life at the same time.

Here’s the full interview for your viewing pleasure…

We’d love to hear from you: Tweet to us @singularityhub or to me @svm118 with questions, suggestions, comments and ideas on the series. To get updates on Future of Virtual Reality posts, sign up here.