A Grand Unveiling: Inside the Big Ideas Hatched at the 2015 Graduate Studies Program

Only 10 weeks ago, 80 individuals from 43 countries around the world arrived on Singularity University’s campus here in Silicon Valley to embark on SU’s flagship Graduate Studies Program. Over the course of the program, participants immersed themselves deep into the intersection of exponential technologies and social impact—and specifically, impact of global scale.

After 7 weeks in the program, the participants rolled up their sleeves and took on SU’s 10^9 challenge; forming 24 team projects, each aimed at positively impacting a billion people in 10 years by leveraging exponential technologies to solve a global grand challenge.

“These must be real ideas that will continue onward and impact a billion people,” said CEO Rob Nail at the closing ceremony held at the California Theatre in San Jose this past Thursday, “And tonight we get to see the grand unveiling.”

The diversity in thought, perspective, and skill set of the 2015 class was tangible through the depth and breadth of the 24 team projects on exhibition at the ceremony, and proudly, the 2015 class had over 50% female representation. 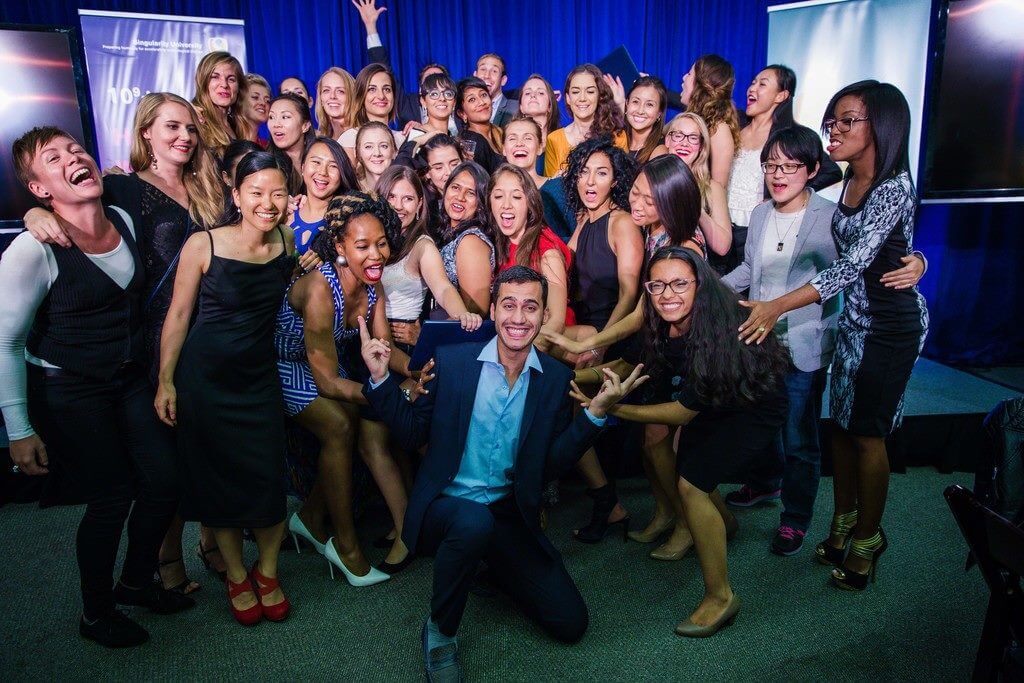 During the last three weeks of the program, we’ve watched as the team projects made great advances. Eighty individuals walked through the Singularity University classroom doors just ten weeks ago and graduating is a community of co-collaborators equally as powerful as the technology they are building.

“Technology has the potential for creating that abundant future that we really are striving for. But technology is not the solution, it’s the people that will leverage that technology, like GSP 2015,” said Singularity University Chief Impact Officer Emeline Paat Dahlstrom during the closing celebration.

From the 24 projects, the following 5 teams were selected to present live, and at the end of the ceremony, Ray Kurzweil perfectly summed up the evening’s sentiment, “Ideas, passion, commitment, and love are what change the world, and I think that we saw that tonight.”

Over 285 million people in the world are visually impaired and 39 million people are blind. Using computer vision and audio feedback, Aipoly acts as an intelligent smartphone assistant for the visually impaired. Users take a photograph of a scene in front of them, which is then uploaded to Aipoly’s server, analyzed, tagged, and a description of the scene is read back to the user via text-to-speech. Within three weeks of creation, Aipoly has already received coverage on TechCrunch, The Daily Dot, and more. Most importantly, feedback from visually impaired beta users is showing that Aipoly could truly empower and transform their daily lives.

Though some 300,000 people die each year in motorcycle accidents, the market for motorcycles is growing 7.2% annually. Many of those riding motorcycles daily live in low- to middle-income countries. Oliver is an affordable smart helmet that uses advanced built-in sensors and a Bluetooth connected app to communicate key safety information to motorcycle drivers. Key features include blind-spot assistance, high-speed warning, SOS alerts to pre-identified contacts, and an air quality sensor to warn the wearer of toxic fumes. The team also plans to integrate Google Glass technology once the price point decreases and will be releasing a model priced at $100 as well as a device that can be attached to an existing helmet, priced at $65.

Currently, response techniques to infectious disease outbreaks rely primarily on passive and reactive methods. Aime is using machine learning and big data analytics combined with artificial intelligence to predict the time and location of infectious disease outbreaks—in real time. The team is first turning their attention to tackle dengue fever, which currently has 400 million cases reported annually and 2.5 billion people reported to be at risk. The team has already succeeded in using Aime to pinpoint the location of a dengue outbreak down to a 400-meter radius and has validated the product in Malaysia with 88.6% accuracy rate.

“The question is not what we can see, but what we should see so we can take action and transform our communities.” ImpactVision aims to bring hyperspectral imaging to smartphone cameras to expand what the human eye is otherwise unable see, allowing users to see materials, chemicals, and even bacteria in real time to help users make more informed choices in their lives. This ranges from showing users predicted expiration dates on groceries to reduce food waste, to detecting bacteria on your hands or in your water, to harmful pollutants in surrounding environments that are not visible to the human eye.

“If we’re going to transition from a fossil fuel based economy to a renewable energy future, we need to understand weather better.” Anticip8 Analytics is creating an integrated hardware and software system for advanced weather analytics—and without the use of centralized supercomputers. The system supports suppliers of renewable energy sources, such as wind and solar energy, who depend upon weather forecasts to understand what their energy output is going to be the following day. They’ve built a prototype using non-traditional hardware to create low-cost field sensors that do computation on the ground, send back the data and update high-resolution spatial and temporal modeling. Their ultimate goal is to build ground-up weather models that update every 10 minutes.

“The biggest problems facing humanity are only going to be solved through new perspectives with new diverse groups coming together leveraging exponential technologies and the Graduate Studies Program is all about that.” -Rob Nail, CEO Singularity University