It sounds completely crazy: as early as next year, using gene therapy scientists hope to restore sight in the blind by giving their eyes additional “light sensors.”

We’re not talking about bionic eyes: instead of implantable electronics, scientists are turning to a protein called channelrhodopsin-2. You’ve probably heard of this protein before — it’s the same magical switch that, in response to light, can turn a gentle mouse aggressive, shut down obsessive grooming behavior, and implant false memories in unsuspecting mice.

What does a mind-controlling protein have to do with restoring vision?

Meet the protein that sparked a neuroscience revolution

The answer lies in how channelrhodopsin-2 works. The protein comes from the lowly green algae, which uses it to seek out sunlight for photosynthesis.

At its core, channelrhodopsin-2 is a light-sensitive protein tunnel that sits on the surface of cells. Normally the tunnel is completely cinched up, which allows a cell to maintain a steady interior environment.

However, when a certain wavelength of light hits the protein, the tunnel temporarily flashes open, much like a camera shutter. When open, the protein is like a highway, shuttling ions into the cell — the same biophysical process that makes a neuron burst with activity.

About a decade ago, neuroscientists realized that they could stick the protein into mouse neurons that were previously impervious to light. By using sophisticated genetic tools, the protein could be restricted to certain types or populations of neurons, rather than huge chunks of the brain.

Then, by shining light through an implanted fiber optic laser, researchers can artificially activate select networks of neurons. The results are nothing short of science fiction: a flash of light, and a mouse — going about its business as usual — might, for example, suddenly freeze in place as if terrorized. Turn the light off, and it’ll revert back to its normal happy-go-lucky state, seemingly unaware that anything strange just happened. Hence, the “mind control” part.

The scientists dubbed this powerful new technique optogenetics, and hundreds — if not thousands — of labs around the world are now using this technique to explore the intricate neural connections in the brain.

The brain-bending powers of channelrhodopsin-2 are so mind-boggling that it’s easy to forget the simple nature of the protein: it senses light, and transmits that information through electricity to higher processing centers. 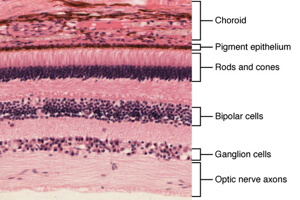 Broadly speaking, human eyes work similarly. Light passes through the length of our eyeballs and falls on the back of the retina, activating light-sensitive proteins called photoreceptors (these are shaped like rods and cones). The photoreceptors transmit light information through two filter layers — ganglion and bipolar cells — that process the electric signals and send them to visual areas of the brain.

In many eye disorders, such as retinitis pigmentosa or macular degeneration, the rods and cones gradually die off. This leads to progressively failing vision, and — without a cure — eventually turns one out of four sufferers legally blind.

These are cold, brutal diseases, but there is one silver lining: they leave ganglion and bipolar cells intact and still able to still communicate with the brain.

The obvious treatment would be to introduce human hardware back into the human retina through gene therapy. Yet, human light-sensitive proteins are notoriously hard to engineer. To function normally, they have to be tightly coupled to many other supporting proteins. This means scientists would have to get multiple genes at the right ratio and levels into the retina — a feat that is currently impossible.

Channelrhodopsin-2, on the other hand, works just by itself.

In 2006, Dr. Zhou Hua Pan, a researcher at Wayne State University, decided to stick the protein into mice that were genetically engineered for photoreceptor degeneration. It worked on the first try; in less than three months after a single treatment, the mice passed every vision test the scientists could throw at them.

“It worked perfectly, even in the very beginning,” Pan told Wired. “That was basically just really, really lucky.”

Pan’s success did not escape the notice of the biotech industry. In 2009, RetroSense Therapeutics, a startup located a short drive away from Wayne State, leased the eye-wiring tech from Pan in a bid to bring it to human trials. Last month, the FDA gave its nod of approval: as early as this fall, the company will start installing channelrhodopsin-2 into the retinas of 15 patients blinded by retinitis pigmentosa through gene therapy.

The company is aiming for retinal ganglion cells, which are spared by the disease even in advanced stages. In essence, by giving these “middle men” the ability to sense light, scientists hope to circumvent the need for rods and cones.

A long road ahead to color

To be clear, as promising at it is, the algae protein can’t restore human vision to all its colorful vividness.

The photoreceptors in our eyes, optimized by eons of evolution, operate over a wide range of light intensities and wavelengths — we get to see everything from pale starlight blinking in an indigo sky to glaring sunlight above white hot sand, and all the colors in between.

In contrast, channelrhodopsin-2 paints a dim monochromatic landscape. The protein is 2,000 times less sensitive to light than our retinal cones. It only responds to a very narrow set of wavelengths — and thus colors — of light, a far cry from our normal eyesight. In a way, going from rods and cones to channelrhodopsin-2 is like going from an expensive 20-gear road bike to a fixie. It works, but it’s not optimal.

Ganglion cells also don’t normally deal with light — they generally process electrical signals that come from rods and cones. Whether raw light signals work as well as pre-processed electrical information from photoreceptors is still up in the air. If the gene therapy successfully delivers channelrhodopsin-2 to these cells, the brain will have some serious rewiring to do before it can interpret these strange new signals.

Even with these caveats, the therapy may be a game changer. A decade ago, channelrhodopsin-2 dramatically changed the face of neuroscience — here’s to hoping it’ll spark another revolution soon.