Exponential Medicine: The Most Advanced Nanotechnology Today Is Already Inside You

For me, the word nanotechnology evokes a specific image. Maybe you’re the same. It’s a machine. Perhaps a little futuristic. But something that wouldn’t seem out of place on the street or in a factory. And it’s tiny. Much smaller than the cells in your body.

This machine is doing some kind of work. Maybe it’s repairing tissue, sweeping away malfunctioning proteins, destroying cancer cells and viruses, or delivering a drug to precisely the right cell at precisely the right time. Our body would be swimming with these things, and they’d take good care of us on the cellular level and beyond.

It’s a powerful (and weird) idea. And maybe some day we’ll get something like it. But in today’s world, it’s more fantasy than fact.

“Right now, nanotechnology is really hard,” said Andrew Hessel, founder of Pink Army and distinguished researcher at Autodesk’s Bio/Nano Programmable Matter group. Hessel normally describes himself as a biologist, but he was at Exponential Medicine to talk nanotechnology and to show that the two overlap more than you think. 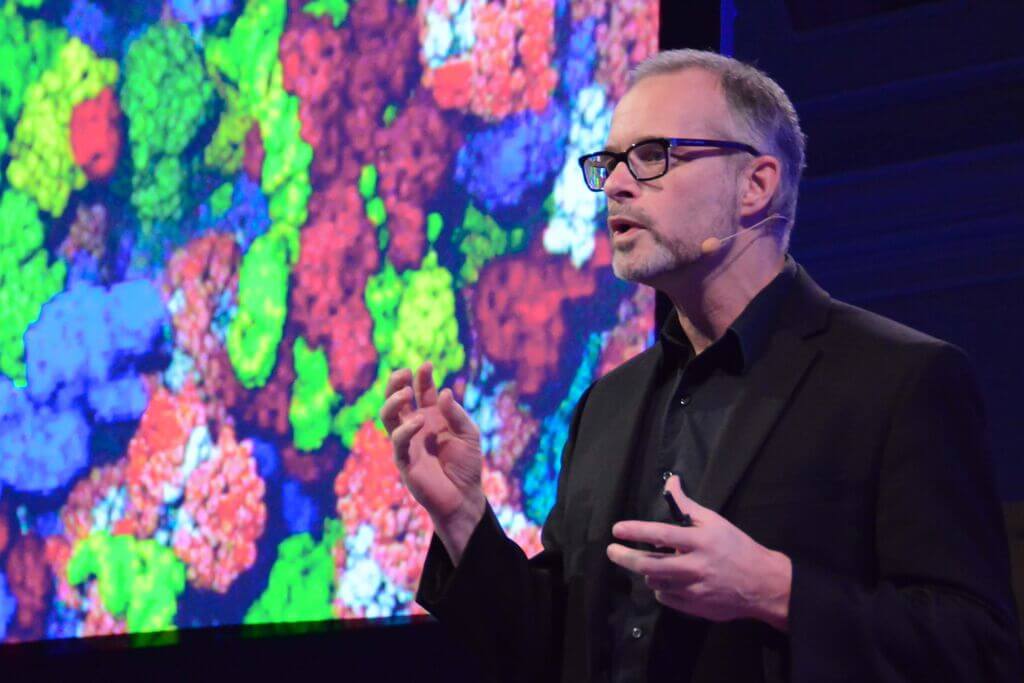 Why is nanotechnology such a tough nut to crack? Stuff doesn’t obey the same rules on the nanoscale. You have to do away with smooth lines, Hessel said. Everything is alive, dynamic, constantly moving. The physics is different. The time scales are bizarre.

But here’s the thing. Looked at from a particular angle—an angle Hessel, as a biologist, highlighted throughout his talk—nanotechnology is already here, and it’s one of the oldest, most finely developed and widely employed “technologies” in history.

Viruses or the body’s cellular machinery—these exist on the nanoscale. When he looks at cells, Hessel said, he sees computing and manufacturing hardware that self-assembles. This self-assembling hardware has a programming language (DNA), it’s universal across all living things, and this is something we should use.

“If you’re really interested in nanotechnology, but want to do it digitally and do it in a way that scales and share the code,” Hessel said, “you really have to think about programming living cells to do the work and using DNA to do it.”

We’ve been making simple shapes out of DNA for years. Now, we’re making complex ones too. And we can dream these up and design them on a computer.

Some of these DNA shapes even perform simple tasks, like carrying a molecular payload (a drug, perhaps) in a clam shell which opens up when a particular protein “key” on its surface is triggered, a little like those imagined nanorobots might.

Hessel is also talking about synthetic biology. We can already write up some DNA code, send it off to a print shop (“a Kinko’s for DNA”), have it assembled in a couple weeks, and make a virus that does something we’ve anticipated in the code.

This is the kind of work Hessel is doing at the Autodesk Bio/Nano group. Making software to manipulate biology on the tiniest scales, and get it to do stuff. For now he’s focused on nanoparticles, but the area is fast moving into more complex realms.

And he’s perhaps most excited about the convergence of biology and electronics. Chipmakers are some of the most experienced engineers working on the nanoscale—but they’re fast approaching the limits of what they can do with silicon-based chips.

“Below five nanometers, only life knows how to position molecules with enough accuracy to build bottom up,” Hessel said. We’ve begun combining biology and electronics in DNA nanopore sequencers and microfluidic chips. But this is just the beginning.

In the future, Hessel imagines other fruitful combinations, driven by chipmakers with an eye for biology: “They’ll make sensors; or they’ll turn it around, and they’ll start making electronically controlled polymerases to write DNA cheaper than you could ever imagine; or use DNA as a storage medium—on and on and on.”

While synthetic biology or DNA origami isn’t what we mean when we talk about nanotechnology—they might provide some critical clues to get us closer. Life, as it turns out, has been working on the nanoscale for eons. We should take notes.