Not too long ago, virtual reality was stuck in the lab, an elaborate, expensive rig that worked okay, sure, but was a far cry from anything dreamed up in the movies.

Now, it’s no longer a question of when digitally immersive tech for the masses will arrive—but what happens when it matures? After an award-winning trip on the festival circuit, The Nostalgist is finally available online to give us a glimpse. 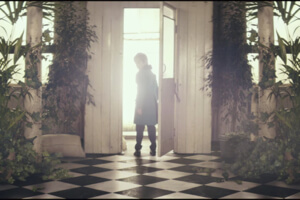 The short is based on a story by Daniel H. Wilson, author of How to Survive a Robot Uprising and Robopocalypse. And like another recent VR-themed film, Uncannny Valley, it portrays mixed reality (VR’s sibling technology) as an addictive escape—the opportunity to scrub the world away when the future gets too damn gritty.

The film’s focus is a boy and his grandfather, and opens on a scene of them playing chess in a clean Victorian room. At first, all is well. Just another day. Then the room flickers, and things get weird. Complete with mixed reality, AI, robots, and human-robot hybrids, it’s a great ride. And although it was written in 2009, filmed in 2012, and first released in 2014, it still feels relevant.

The dystopian futures popular right now are perhaps more symptomatic of today’s uncertainty than true prophesy of tomorrow’s woes. But the darker, sadder parts of the world won’t simply disappear, and the desire to seek comfort in digitally immersive nostalgia isn’t much of a stretch.