Are We at the Edge of a Second Sexual Revolution?

Do you remember your first formal lesson about the birds and the bees? Our biology or health teachers stood before a classroom full of giggling, squirming preteens and told us how babies are made. The best way to make a baby, they said, is to find someone you love, get married, and have sex. The image we had of a stork delivering a blue or pink-swaddled bundle to parents’ outstretched arms was shattered, and we started to accept the realities of procreation. Eventually, we assumed we had it all figured out.

Well, brace yourself, because according to serial entrepreneur Martin Varsavsky, all our existing beliefs about procreation are about to be shattered again. Varsavsky is CEO and founder of family planning startup Prelude Fertility, and in a presentation at Singularity University’s 2016 Global Summit last week, he explained why his company wants to help start the second sexual revolution.

The first sexual revolution began in May of 1960, when the FDA approved oral contraceptives and made them available to the general public. Suddenly there was a safe and effective way to avoid unwanted pregnancy, and women were quick to jump on the birth control bandwagon; by 1965 almost 6.5 million American women were on the pill. With the advent of birth control, sex became decoupled from procreation.

According to Varsavsky, the second sexual revolution will decouple procreation from sex, because sex will no longer be the best way to make babies.

Couples who decide to have children always hope for healthy babies who will lead long, full lives, and they hope to conceive those babies without a lot of physical, emotional, or financial strain. According to Varsavsky’s research, in 2016 seven million people will try to conceive through sex, but only five million will succeed. Of those five million, one million will miscarry, which leaves four million new babies. 200,000 of those new babies will be born with preventable congenital health problems.

These statistics point to a looming infertility epidemic. The global population is predicted to rise above eight billion by 2025 and above nine billion by 2050, but if birth rates continue on their current trend, the population could begin to collapse thereafter. The replacement fertility rate, which is the average number of children each woman needs to have to maintain the population, is 2.1 in the U.S. At 1.9 children per woman, the actual fertility rate is slightly below the replacement rate. 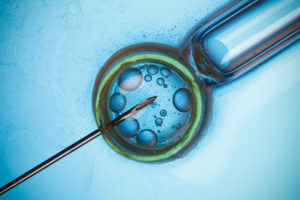 Multiple factors play into this disparity, but it’s interesting and somewhat alarming to note that a lack of desire to have kids isn’t one of them.

According to Varsavsky’s research, the average number of kids women under 30 want is 2.7, but 70% of women hit their 40s without reaching that target. Anyone who has struggled with infertility or watched friends or relatives struggle with it knows how distressing it can be, both for the individuals involved and for their relationship. Procreation and parenthood are fundamental experiences that nature not only intended for us, but hard-wired into our DNA; longing for children and not being able to produce them leaves people feeling like they’re missing out on an essential part of being human.

Is there a better way?

This begs the question: can we make babies in a way that’s better than by having sex? Our bodies evolved to procreate in our teens or 20s, and based purely on biology, in 2016 we should still be having babies in the same window of time our ancestors in 1816 or 1016 had them. But unlike our ancestors, nowadays our bodies are not in sync with our lives. Women want to focus on their careers before having kids. People are getting married later. Couples want to experience life together for a few years before starting families. And to top it all off, we’re living far longer than humans ever have before.

Delaying parenthood has resulted in a boom in the in-vitro fertilization (IVF) industry, but even among couples who try IVF, 30% never get to have a baby. Varsavsky wants to bridge this gap. He developed the Prelude method as a way to have healthy babies later in life. The method involves four steps:

Does this all sound a little too Gattaca-like for you? Varsavsky insists that the Prelude method is not about making better-looking or smarter babies; it’s about making healthy babies, which is what people want. Chromosomal and genetic abnormalities can be weeded out without pre-determining any of the baby’s other characteristics.

But where is the line between selecting traits for healthy babies and making designer babies? What if I want to choose whether my baby will be extroverted or introverted? Can I decide how smart my baby will be? Would I then be more heavily responsible for my child’s success or failure in different areas of life?

Before these hypothetical questions, though, there’s a more basic and more pressing question that 30 and 40-something women are already asking: if my life doesn’t play out such that my body can produce healthy children in time, do I accept this as a fact of nature, or do I use technology to try to circumvent nature?

Do we have alternatives?

A second sexual revolution that fully decouples procreation from sex may not happen, but the growing popularity of IVF and other fertility treatments shows that we’re already taking steps in that direction. If further developments in reproductive technology aren’t the future of baby-making, then what is?

Getting our ages-old biology in sync with our 21-st century lifestyle is no easy task. If combining biology and technology to make babies without sex sounds crazy, how about shunning technology and relying solely on biology? Can you picture us regressing our lifestyles to match those of our great-grandparents, with people getting married by age 20 and having babies by 25?

Designer babies probably aren’t the answer to our procreation challenges, but using technology to help our bodies keep pace with our lives may be one of our best alternatives.