In 2013 the world’s first cell-cultured hamburger was cooked and tasted live on air.

Following that event, there have been many mentions of cultured meat in the media. With all this discussion and publicity, it’s easy to assume your local grocery store will soon be stocking cultured bacon and chicken wings. However, the reality is starkly different; the era of cultured meat is far off. Although the concept has been proven, producing cultured meat in mass quantities remains an idea. It’s an idea with huge potential, but it’s still severely underfunded.

Why would anyone want cultured meat?

Our current meat production system is broken in many ways. It’s unsustainable in the long run: today, we use 30% of Earth’s ice-free land to feed animals to make protein for us. The livestock sector produces nearly 15% of global greenhouse gas emissions. Overall, the current system offers too many opportunities to harm us via E. coli, Salmonella, antibiotic resistance, eutrophication, loss of biodiversity, and air pollution. 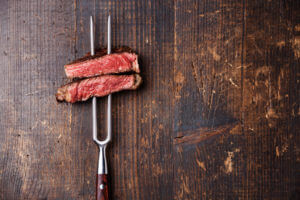 So if we want meat, why can’t we grow it? Why produce an entire living organism as an inefficient intermediary?

Cultured meat offers a route to safer, healthier, and cruelty-free meat that is 100% identical to conventional meat. The technology is expected to be less harsh on the environment, reducing the need for scarce fresh water, land, and fuel while decreasing greenhouse gas emissions and antibiotic resistance.

Not to mention, major improvements in efficiency are anticipated.

As an example, Memphis Meats, one early-stage startup aiming to bring cultured meat to market, plans to use just three calories of inputs to produce one calorie of meat. This would be an improvement over the conventional system, which Memphis claims uses 23 calories in feed to make one calorie of beef.

You might imagine that a field with such huge potential for fixing our broken meat production system ought to be well-funded and backed by billionaires, deep-pocketed private research institutes, and federal research bodies. That couldn’t be further from reality.

Today, work on cultured meat is mostly being supported by New Harvest, a tiny, 100% donor-driven research institute with only 4 full-time staff. Against all odds, they’ve made huge strides for the field:

These achievements are good first steps, but many challenges exist on the road to commercialization. Overcoming these challenges will accelerate the dawn of cultured meat, transforming it from an idea to a product.

Here are four things we must do to make the era of cultured meat a reality.

There are two major scientific challenges we must overcome:

Today, researchers in the medical space have easy access to most of the cells they need; they simply open up catalogues and order as required. This is only possible because cell banks for different types of cells were created in the past. Such cell banks do not exist for cultured meat. Thus, any researcher that wishes to work on cultured meat must first establish a cell line directly from the animal, and this is an arduous, delicate process.

You wouldn’t expect a programmer to first create an operating system before building apps. Similarly, we need to reduce the barrier to research on cultured meat by providing cell lines. Work on this has already begun: North Carolina State University Professor Paul Mozdziak and his graduate student Marie Gibbons were funded by New Harvest to create a cell line for turkey cells earlier this year.

By adequately laying the foundation, we create an enabling environment for researchers to focus their brainpower, time and creativity on the difficult science of creating cultured meat products instead of sourcing starter cells.

To grow animal cells outside of an animal, it is necessary to simulate the environment of being inside the animal. Today, that requires the use of fetal bovine serum (FBS), a complex soup of proteins and growth factors that is, ironically, sourced from the blood of dead baby calves. Beyond the apparent ethical dilemma, FBS is expensive, prone to batch-to-batch variation, and potentially a source of contamination.

We need engineers to build the enabling technologies that will usher in the dawn of cultured meat. The opportunities here are huge, requiring nearly every major sub-domain of engineering.

Tomorrow we will need:

3. Establish the field as an academic discipline

We need far more brains and money dedicated to building the knowledge base. A grand total of about 10 academics in the world currently working full-time on cellular agriculture is woefully insufficient. One way to achieve this is to establish the field as an academic discipline. As a start, this could entail:

4. Open the world of cultured meat up to everyone

Consumers want to know what’s in their food and how it’s made. But the current meat production system is invisible to most of us. Many of us haven’t visited the factory farms that produce the calories we put into our bodies. Our love of meat keeps us blissfully ignorant.

The more open and cooperative the science behind cultured meat is, the faster we may be able to enjoy it. We all have a stake in this as the benefits of cultured meat are shared amongst us. Here are some ideas for opening up the field:

Overall, cultured meat heralds a new way of viewing our world. Advancing cultured meat is advancing the notion that abundance and sustainability need not be mutually exclusive. We will look back and consider it perverse that we once produced entire animals in order to obtain a few select parts for food, like breasts, thighs, wings, and legs. We will balk at our former inefficiency.

If we want cultured meat to transform the world the way self-driving cars and affordable solar power will challenge the status quo, we need to start taking action today.