Pill Packing 100 Billion Designer Bacteria Could Be Tested Next Year

Bacteria are among the oldest life forms on Earth and exist nearly everywhere; in the soil, water, deep in the earth’s crust and in our own bodies. Actually, there are at least as many bacterial cells in the human body as human cells.

Bacteria tend to get a bad rap, but now, armed with new research on the bacterial world (or microbiome) in our bodies, we are starting to understand how important a role microorganisms play in our health (good as well as bad).

And beyond merely understanding the relationship between our bodies and the microorganisms inhabiting it, we’re on the cusp of significantly altering that relationship. 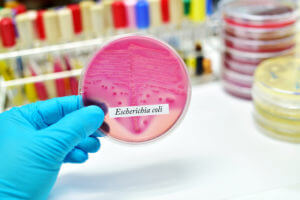 For the last decade or so, synthetic biologists have been reprogramming bacterial strains to serve new functions — a well-known experiment added bioluminescence genes to bacteria to make them glow, for example. Today, this is an experiment a child could carry out with a little instruction.

While making a glowing bacterium is a fun trick, it also represents a larger shift in how we think about living organisms. With synthetic biology, we can develop organisms to provide many useful functions nature never created.

In one of the first medical applications of this concept, Synlogic has patented a version of E. coli engineered to develop “an unquenchable appetite for ammonia” and turn it into the amino acid arginine, which, unlike ammonia, is harmless to the human body.

Ammonia forms as the body breaks down protein, but the liver works to convert ammonia into urea, which is flushed away in urine. However, some people are unable to rid their bodies of ammonia fast enough, which can lead to serious health problems.

Synlogic’s new “synthetic biotic” pill, which could be tested by volunteers next year, contains 100 billion of these reprogrammed bacteria.

In theory, it’s possible this reprogrammed bacteria could swap DNA with another strain, but these engineered genomes are expected to die off quickly before being able to share any genetic information. Additionally, the bacteria will only begin feeding on ammonia in a low-oxygen environment like the gut (not the digestive tract).

Whether this particular product fails or succeeds, it’s clearer than ever that we have entered a fascinating new phase of human development where we can deliberately control our own biology and that of the organisms living in our bodies.