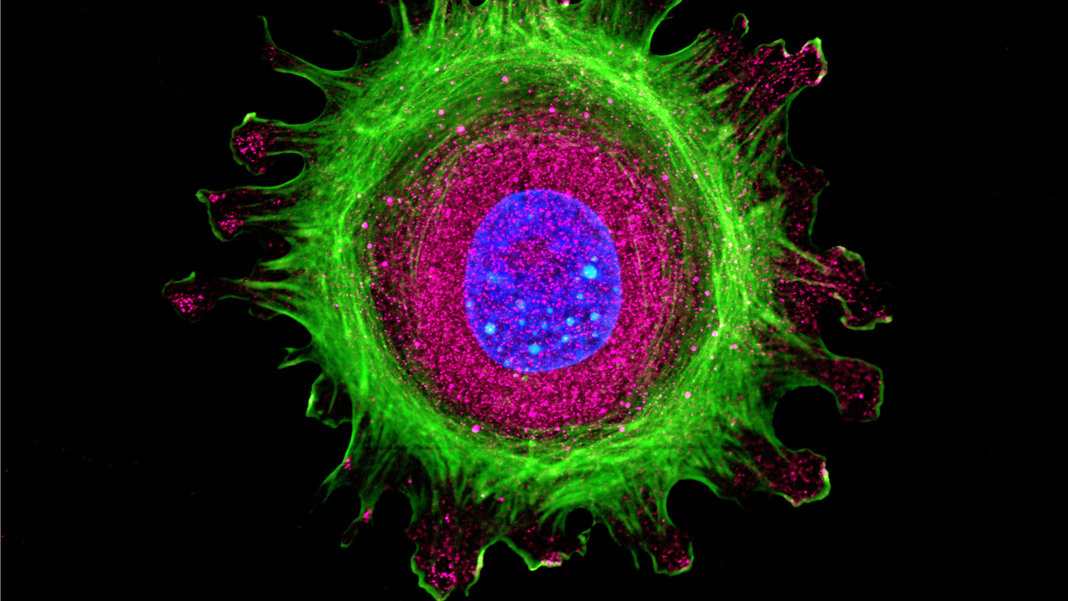 There’s something eerily dystopian about the lives of cells.

Like the young heroes in popular teen novels, cells are born into stringent organ “societies,” destined to perform specific roles preordained by their DNA expression. Like the bodies they inhabit, cells have limited lifespans, and when they grow old, they begin leaking toxic molecules into their surroundings.

To protect the body, aged cells undergo the ultimate sacrifice: they switch on molecular machinery that results in their own death—a process beautifully named “apoptosis,” meaning the “gentle falling of leaves” in ancient Greek.

But sometimes aged cells go rogue. Rather than committing suicide, these cells lurk in our hearts, livers, kidneys and brains, where they silently promote disease. Scientists have long suspected that these “senescent” cells cause us to age, but getting rid of them without harming normal, healthy cells has been challenging.

Now, a collaborative effort between the Erasmus University in the Netherlands and the Buck Institute for Research on Aging in California may have a solution. Published in the prestigious journal Cell, the team developed a chemical torpedo that, after injecting into mice, zooms to senescent cells and puts them out of their misery, while leaving healthy cells alone.

“This is the first time that somebody has shown that you can get rid of senescent cells without having any obvious side effects,” says Dr. Francis Rodeir at the University of Montreal in Canada, who was not involved in the study.

When treated with the drug, aged mice regrew their scraggly fur into luscious coats and saw improved liver and kidney functions. They also seemed more energized, opting to spend their time on a running wheel instead of sleeping in a corner.

Rather than a synthetic chemical, the drug is a small peptide made up of amino acids, the building blocks of protein. Similar peptide drugs are already revolutionizing stroke therapy, and the team plans to begin human safety trials with their anti-aging drug soon.

The study offers the first glimmer of hope that deleting senescent cells could be feasible in people. “It’s definitely a landmark advance in the field,” says Rodeir.

As we age, our cells accumulate damage to their DNA. Although cells have molecular “mechanics” that can fix minor problems, eventually the damage becomes too much, and the cell is left with a decision: self-destruct, turn cancerous or become half-dormant in a state called senescence.

Initially, senescent cells were considered helpful because they thwart the formation of dangerous tumors. But about a decade ago, the picture changed.

“It was found that these senescent cells secrete a whole load of junk, and they’re not just bystanders, but have a negative effect,” explains study lead author Dr. Peter de Keizer.

Whether this dark side of senescent cells drives aging, though, remained unanswered.

Last year, scientists at the Mayo Clinic in Minnesota genetically modified mice so that their bodies automatically killed off about 50-70 percent of their senescent cells. After six months of treatment, the mice had healthier kidneys, stronger hearts, and—the most jaw-dropping result—they also lived 20 percent longer than the controls.

Even the scientists were shocked, remarking that they didn’t expect such a dramatic improvement. The study galvanized the field: senescent cells do in fact contribute to aging. And if they can be stopped, maybe we can also slow down the aging clock.

The billion-dollar question was how to make it work in humans, without resorting to gene therapy.

De Keizer’s team came up with a brilliant solution: figure out what stops senescent cells from suicide, and destroy that brake.

Peering into the molecular traffic inside senescent cells, the team uncovered an attack strategy. Cells carrying DNA mutations usually spur a protein called p53 into action, which kicks off the whole apoptosis program. Senescent cells, however, have another protein called FOXO4 that latches onto p53 like handcuffs, preventing p53 from doing its job.

The team then designed a peptide drug that elbows its way between FOXO4 and p53. The death protein is freed, and convinces the cell to self-destruct. Because healthy cells have very low levels of FOXO4 or none at all, they’re spared from the drug’s effect.

Here’s another clever part: peptide drugs are usually too big to get into cells, which is why there are so few on the market. The team relied on a technology that’s only recently become popular: cell-penetrating peptides. These peptides, true to their name, can tunnel their way into organs and cells after an injection (even the brain!)—a total win, since they’re more easily adapted for human use.

The team first tested their peptide on mutant mice that aged abnormally fast. Although only middle-aged, the mice were in bad shape at the start of treatment: they had patchy fur coats, a hunched posture and were generally lethargic and frail.

While not initially planning on looking at hair loss, the change was so dramatic it couldn’t be ignored. The lab technician ran into my office and told me “the mice have regrown their hair, we’ve never seen that before,” recounts De Keizer.

At the organ level, the drug rebooted the animals’ worn-down kidneys so that they could once again filter toxic chemicals out of their blood.

The mice also perked up. Rather than sleeping all day in a corner of a cage, they chose to run ferociously when given access to a running wheel—roughly three miles a day, nearly four times the distance of control animals treated with PBS, an inactive solution used to dissolve the peptide.

It’s like a weak, elderly person suddenly jumping off the couch, turning off the TV and voluntarily running a marathon—all because of a few doses of the drug.

In the next set of experiments, the authors repeated the treatment on normally aging mice and saw similar improvements in kidney function and in their willingness to explore.

Not satisfied with just targeting aging, the team also tried their drug on animals given a common chemotherapy agent, which induces the type of DNA damage that leads to senescent cells. Once again, the peptide drug worked its magic, counteracting the damaging effects of chemotherapy on the liver and helping the mice maintain their body weight.

The peptide seems to be “a potent drug to restore loss of health after natural aging,” concluded the authors. It may be a potential game changer in our battle against senescent cells and the diseases they cause, they added.

From mice to men

Compared to genetically killing off senescent cells, using a peptide drug is a much easier method to tweak for use in humans. That’s not to say it’s smooth sailing from now on.

Because our stomach acid readily chews up peptides, making the drug into a pill will require some serious troubleshooting—although one could argue daily (or weekly) injections is a small price to pay for an extended healthspan.

More pressing is the question of safety. Because the peptide will mostly be given to elderly people, the bar for safety is extremely high. Previous attempts at developing drugs that target senescent cells—“senolytics”—were stifled by serious side effects.

The team plans to first test the safety of their peptide in people with an aggressive form of brain tumor, which shares senescent markers with aging cells. “We’ll move cautiously, first try it in a dish and then maybe go into people,” De Keizer says.

“If the drug continues to be safe, we’ll think about testing it on aging-related diseases or aging itself,” he adds.

“I think approaches aiming at the elimination of senescent cells will probably be in clinical trial in the next few years,” he says.