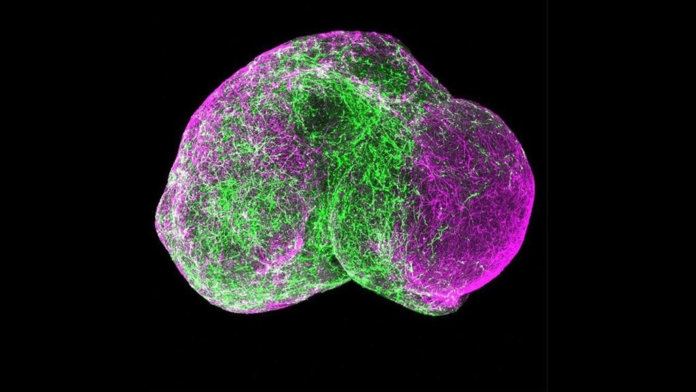 Brain balls sound like something straight out of a Tim Burton movie: starting as stem cells harvested from patients, they eventually develop into masses of living neurons, jumbled together in misshapen blobs.

Just like the developing brain, these neurons stretch and grow, reaching out skinny branches that grab onto others to form synapses—junctions where one neuron talks with the next.

And they do talk: previous attempts at growing these “brain organoids” found that they spark with electrical activity, much like the webs of neurons inside our heads that lead to thoughts and memories.

They’re creepy. They’re fascinating. And they may be neuroscientists’ best bet at modeling developmental disorders like autism in a dish.

Last week, two studies published in the prestigious journal Nature argued for brain balls as a reductionist model for broken brains. In one study, scientists took skin cells from patients with Timothy syndrome, a devastating neurodevelopmental disorder that often ends with childhood death, and grew them into brain balls to study where and how the developing brain veered off track.

In a separate paper, researchers used cutting-edge technology to profile the inhabitants of brain balls as they matured for eight months in a dish. Here’s a creepy teaser: some blobs contained retinal neurons that normally allow us to see. Brain balls with eyes?!

As bizarre as that sounds, the fact that brain balls can develop a variety of neuron types with densely packed synapses is a win. Because they’re made from human cells, brain balls may eventually mimic diseases like schizophrenia, autism, or Alzheimer’s better than mouse models, revealing what went wrong and offering ample test grounds for potential treatments.

“We’ve never been able to recapitulate these human-brain developmental events in a dish before,” says Dr. Sergiu Pasca at Stanford, who led the Timothy syndrome study. “Our method lets us see the entire movie, not just snapshots.”

They often begin their short life as run-of-the-mill skin cells. Scientists first transform them back into stem cells. Then, using a chemical concoction of nutrients and signaling molecules, the stem cells are pushed to spontaneously assemble into little Frankenstein blobs of brain tissue.

But the process isn’t just random bursts of division and growth. Rather, the way the brain balls mature roughly echoes how a fetus’s cortex develops in the womb: the outer edges curl inward, forming outer and deeper layers.

What really sparked scientists’ interest was this: almost 90 percent of the neurons within a brain ball had active synapses, often spontaneously shooting electrical pulses to others in their network. While scientists believe brain balls aren’t capable of “thinking”—the high-level cognitive processes constantly churning in our heads—they’re definitely doing something.

To begin getting some answers, Dr. Paola Arlotta and team at Harvard followed a number of brain balls for nine months as they gradually matured—roughly the amount of time for human gestation, and much longer than any previous attempts.

Periodically, the researchers harvested more than 80,000 brain balls and ran sophisticated genetic tests to figure out their gene expression profile. Like law enforcement using DNA to match a perpetrator’s identity, this allowed researchers to profile the inhabitants of the organoids.

It was a cellular bonanza: as expected, excitatory neurons and non-neuronal cells called glia both made an appearance. More surprising were inhibitory neurons that dampen network activity, and cells that normally form the corpus callosum, a highway that connects the brain’s two hemispheres.

But creepiest by far, every single type of retinal cell also made an appearance. Although they couldn’t really “see” in the normal sense, when bathed under light they did fire off electrical signals.

Just like a developing brain, the older they got the more complex the brain balls became. At eight months old, they contained roughly the same density of synapses as a human fetus’ cortex.

The cells “connect with each other, forming circuits, and once they’re connected, they can synchronize their activity,” potentially mimicking higher-order functions of the human brain, says Arlotta.

That’s great, because it means mini brains could be used to study how different types of neurons connect with each other, and how disrupting the process leads to developmental problems.

That’s the direction the second study took. Rather than letting the mini brains grow wild, Pasca and team at Stanford tweaked the protocol to force them into different identities.

Starting from skin cells collected from patients with Timothy disease, the scientists used distinct chemical concoctions to form two batches of brain balls, each roughly 1/16 of an inch across and containing one million cells. One batch contained mostly inhibitory neurons, mimicking deeper brain regions, whereas the other modeled the cortex.

“The spheroid cells were remarkably similar to those from corresponding regions of the human fetal brain,” says Dr. J. Gray Camp and Dr. Barbara Treutlein at the Max Planck Institute in Germany, who were not involved in the studies.

The team then stuck the two types of brain blobs together into the same dish, and as expected, the inhibitory ball started nudging its way into the cortical one, until the two fused together.

As it turns out, the inhibitory neurons from Timothy patients were terrible migrants. Rather than smoothly slithering their way into the mesh of excitatory partners, they stuttered, stopped, but somehow ended up much further than they’re supposed to go, as if making up for their inefficiency.

The problem seemed to be the faulty neurons themselves, rather than defective signals from the environment. When researchers fused a Timothy inhibitory ball with a healthy excitatory one, they still fumbled without heads or tails.

But surprisingly, when treated with a chemical normally used for high blood pressure, the Timothy balls calmed down and migrated normally.

Spheroids are “opening up new windows through which we can view the normal development of the fetal human brain,” says Pasca. “More importantly, it will help us see how this goes awry in individual patients.”

While the scientists don’t know whether the same drug could help babies with Timothy after they’re born—and their basic brain wiring already established—Pasca hopes that there may be a window of opportunity later on in life to correct the misguided migration.

All said, brain balls are an extremely reductionist model of the human brain. Although it’s hard to say whether the root of Timothy disease is faulty inhibitory neuron migration, it’s a great place to start looking for answers.

Pasca is rushing to speed up the process of growing spheroids, hoping to develop a giant depository harvested from many patients to screen for drugs that steers them towards a normal developmental path.

Others are a bit more cautious. These new studies show that brain balls whipped up from the same patient or patients with the same disease can express very different genes, warned Camp and Treutlein. The problem is likely more prominent in neurodevelopmental disorders like autism, in which the cause is a lot more heterogeneous.

But the fact that brain organoids behave like actual brains on several fundamental functions—making connections, spontaneously firing, responsive to external cues—is promising, so much so that they’re sparking intense ethical debates. Can they eventually “see” or “think”? Do they “feel”? Will consciousness spontaneously emerge without us detecting it?

For now, the mini brains are simply too tiny for higher-level thinking. Only “time will tell” what they’ll eventually become, and “how much information these mini brains can provide,” says Camp and Treutlein.