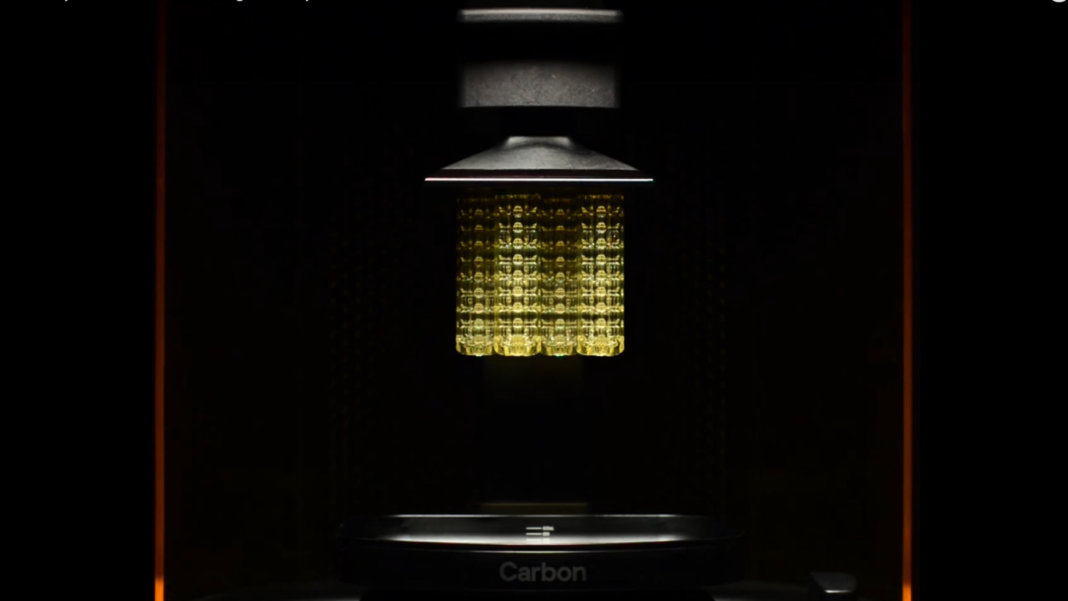 Technology has a funny habit: just when you think it can’t get better, it does. Take 3D printing. The ability for a machine to spit out soft material in a precise pattern that almost simultaneously hardens into an actual thing you can use is pretty incredible.

But there’s room for improvement. To date, low production speed and quality have limited 3D printing to prototyping. Now, additive manufacturing company Carbon aims to change all that with a fast 3D printer capable of printing finished products.

“[This is] what we’ve been dreaming of for 30 years—to go directly from design…to end use parts,” said Valerie Buckingham at Singularity University’s Exponential Manufacturing Summit in Boston last week. “That truly is what we consider the future of manufacturing.”

In short, for polymer parts, Carbon thinks 3D printing can finally break into mass manufacturing and bring all the benefits of going digital along with it.

Seeing their mind-bending technology in action is like something out of science fiction. Buckingham, who’s VP of Marketing at Carbon, described the tech as “a digital light projector shining through an oxygen-permeable optics layer a little bit like a contact lens, into a vat of UV-sensitive liquid programmable resin above.”

Translation: light is shined into a big bucket of ooze and makes something that’s then lifted out of the ooze to be used in our everyday lives.

Since coming out of stealth in 2015, Carbon has raised $221 million in venture capital, and the company just unveiled its SpeedCell system in March. The system features printers that have twice the build area of the previous model and can interface with robots.

Buckingham shared her observations about the current state of additive manufacturing and the emerging trends she thinks are most important for product companies. Below are three focal points Carbon has centered its technology and processes around, and they’re points we’ll likely see take root across the broader manufacturing spectrum in the months and years ahead.

Much faster and structurally stronger

Traditional 3D printing creates an object by depositing material layer by layer. But those same layers can cause mechanical weaknesses. Carbon’s layer-free method, said Buckingham, makes products that “have the same mechanical characteristics in all three dimensions and have great surface finish and resolution, the kind you’d expect from final quality polymer parts.”

3D printing can be thought of as essentially stacking many tiny parts of a material on top of itself then having those parts stick together. Carbon’s continuous liquid interface production technology—CLIP for short—is like taking one big chunk of that material and chiseling it into the same product.

“What’s really important,” Buckingham added, “is that we can do it incredibly quickly.” If you’ve ever watched a 3D printer do its thing, ‘fast’ is probably not a word you’d use to describe it. Carbon’s CEO says the CLIP method is 25 to 100 times faster than other industrial 3D printers.

In a comparison to how little the manufacturing sector has changed with digitization compared to most every other aspect of our lives, Buckingham noted that most production processes still involve design followed by prototyping and analog tooling. Carbon’s printers are one of the first technologies to change that and go directly from design to end use parts.

“One of the critical factors of this technology is that it really places the designer at the center. And it makes it possible for them to manifest their vision directly into the world without a lot of these constraints,” Buckingham said.

The company announced a partnership with Adidas just last month, in which Carbon’s technology will be used to make the mid-soles for a line of shoes called Futurecraft. The athletic wear company has expressed interest in ‘mass-customizing’ its shoes; a person who weighs 120 pounds and wears a size 9 needs a differently-built shoe than a 180-pound size 9.

Products used to be a physical, static output of a process. But additive technology is changing that, and leading companies are figuring out how to design for the process. By digitizing production, you cut out the middle man and go from design to end use is, Buckingham said.

Finally, Buckingham emphasized the importance of provenance, or knowing exactly where a product comes from. This is crucial for highly-regulated industries like medical products. Parts created with additive technology are going to carry their born-on data with them, or, as Buckingham put it, “You’re going to be able to know when it was made, what the resin batch was, who the operator was, and how long it sat in the loading dock for.”

That means product failures won’t require mass recalls, where companies essentially guess what went wrong and end up wasting thousands of units of product so as to err on the side of playing it safe.

Embedded provenance data will let manufacturers pinpoint what went wrong, when, and where, making it easier to identify and solve the problem. “This is going to really change how we think about risk and data when it comes to physical goods,” Buckingham said.