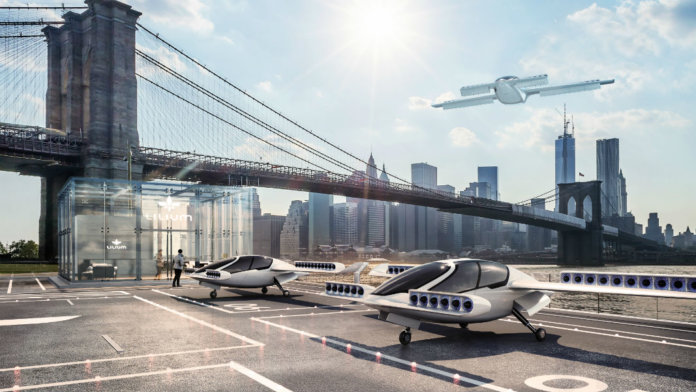 Flying car concepts have been around nearly as long as their earthbound cousins, but no one has yet made them a commercial success. MIT engineers think we’ve been coming at the problem from the wrong direction; rather than putting wings on cars, we should be helping drones to drive.

The team from the university’s Computer Science and Artificial Intelligence Laboratory (CSAIL) added wheels to a fleet of eight mini-quadcopters and tested driving and flying them around a tiny toy town made out of cardboard and fabric.

Adding the ability to drive reduced the distance the drone could fly by 14 percent compared to a wheel-less version. But while driving was slower, the drone could travel 150 percent further than when flying. The result is a vehicle that combines the speed and mobility of flying with the energy-efficiency of driving.

CSAIL director Daniela Rus told MIT News their work suggested that when looking to create flying cars, it might make more sense to build on years of research into drones rather than trying to simply “put wings on cars.”

Historically, flying car concepts have looked like someone took apart a Cessna light aircraft and a family sedan, mixed all the parts up, and bolted them back together again. Not everyone has abandoned this approach—two of the most developed flying car designs from Terrafugia and AeroMobil are cars with folding wings that need an airstrip to take off.

But flying car concepts are looking increasingly drone-like these days, with multiple small rotors, electric propulsion and vertical take-off abilities. Take the eHang 184 autonomous aerial vehicle being developed in China, the Kitty Hawk all-electric aircraft backed by Google founder Larry Page, which is little more than a quadcopter with a seat, the AirQuadOne designed by UK consortium Neva Aerospace, or Lilium Aviation’s Jet.

The attraction is obvious. Electric-powered drones are more compact, maneuverable, and environmentally friendly, making them suitable for urban environments.

Most of these vehicles are not quite the same as those proposed by the MIT engineers, as they’re pure flying machines. But a recent Airbus concept builds on the same principle that the future of urban mobility is vehicles that can both fly and drive. Its Pop.Up design is a two-passenger pod that can either be clipped to a set of wheels or hang under a quadcopter.

Importantly, they envisage their creation being autonomous in both flight and driving modes. And they’re not the only ones who think the future of flying cars is driverless. Uber has committed to developing a network of autonomous air taxis within a decade. This spring, Dubai announced it would launch a pilotless passenger drone service using the Ehang 184 as early as next month (July).

While integrating fully-fledged autonomous flying cars into urban environments will be far more complex, the study by Rus and her colleagues provides a good starting point for the kind of 3D route-planning and collision avoidance capabilities this would require.

The team developed multi-robot path planning algorithms that were able to control all eight drones as they flew and drove around their mock up city, while also making sure they didn’t crash into each other and avoided no-fly zones.

“This work provides an algorithmic solution for large-scale, mixed-mode transportation and shows its applicability to real-world problems,” Jingjin Yu, a computer science professor at Rutgers University who was not involved in the research, told MIT News.

This vision of a driverless future for flying cars might be a bit of a disappointment for those who’d envisaged themselves one day piloting their own hover car just like George Jetson. But autonomy and Uber-like ride-hailing business models are likely to be attractive, as they offer potential solutions to three of the biggest hurdles drone-like passenger vehicles face.

Firstly, it makes the vehicles accessible to anyone by removing the need to learn how to safely pilot an aircraft. Secondly, battery life still limits most electric vehicles to flight times measured in minutes. For personal vehicles this could be frustrating, but if you’re just hopping in a driverless air taxi for a five minute trip across town it’s unlikely to become apparent to you.

Operators of the service simply need to make sure they have a big enough fleet to ensure a charged vehicle is never too far away, or they’ll need a way to swap out batteries easily, such as the one suggested by the makers of the Volocopter electric helicopter.

Finally, there has already been significant progress in developing technology and regulations needed to integrate autonomous drones into our airspace that future driverless flying cars can most likely piggyback off of.

Safety requirements will inevitably be more stringent, but adding more predictable and controllable autonomous drones to the skies is likely to be more attractive to regulators than trying to license and police thousands of new amateur pilots.