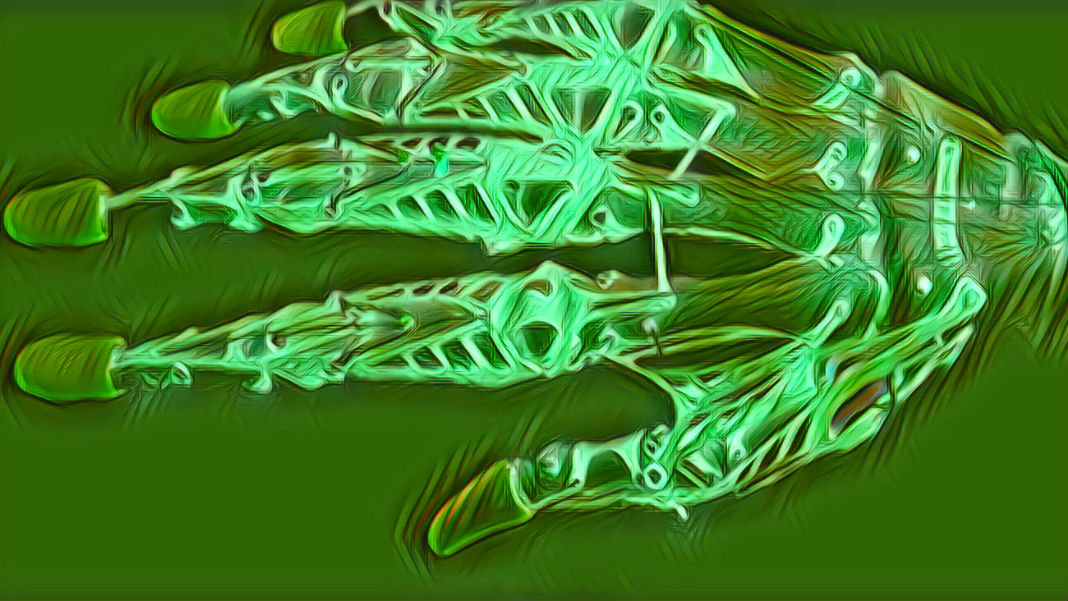 From time to time, the Singularity Hub editorial team unearths a gem from the archives and wants to share it all over again. It’s usually a piece that was popular back then and we think is still relevant now. This is one of those articles. It was originally published September 1, 2016. We hope you enjoy it!

How many cyborgs did you see during your morning commute today? I would guess at least five. Did they make you nervous? Probably not; you likely didn’t even realize they were there.

In a presentation titled “Biohacking and the Connected Body” at Singularity University Global Summit, Hannes Sjoblad informed the audience that we’re already living in the age of cyborgs. Sjoblad is co-founder of the Sweden-based biohacker network Bionyfiken, a chartered non-profit that unites DIY-biologists, hackers, makers, body modification artists and health and performance devotees to explore human-machine integration.

Sjoblad said the cyborgs we see today don’t look like Hollywood prototypes; they’re regular people who have integrated technology into their bodies to improve or monitor some aspect of their health. Sjoblad defined biohacking as applying hacker ethic to biological systems. Some biohackers experiment with their biology with the goal of taking the human body’s experience beyond what nature intended.

Smart insulin monitoring systems, pacemakers, bionic eyes, and Cochlear implants are all examples of biohacking, according to Sjoblad. He told the audience, “We live in a time where, thanks to technology, we can make the deaf hear, the blind see, and the lame walk.” He is convinced that while biohacking could conceivably end up having Brave New World-like dystopian consequences, it can also be leveraged to improve and enhance our quality of life in multiple ways.

The field where biohacking can make the most positive impact is health. In addition to pacemakers and insulin monitors, several new technologies are being developed with the goal of improving our health and simplifying access to information about our bodies.

Ingestibles are a type of smart pill that use wireless technology to monitor internal reactions to medications, helping doctors determine optimum dosage levels and tailor treatments to different people. Your body doesn’t absorb or process medication exactly as your neighbor’s does, so shouldn’t you each have a treatment that works best with your unique system? Colonoscopies and endoscopies could one day be replaced by miniature pill-shaped video cameras that would collect and transmit images as they travel through the digestive tract.

Security is another area where biohacking could be beneficial. One example Sjoblad gave was personalization of weapons: an invader in your house couldn’t fire your gun because it will have been matched to your fingerprint or synced with your body so that it only responds to you.

Biohacking can also simplify everyday tasks. In an impressive example of walking the walk rather than just talking the talk, Sjoblad had an NFC chip implanted in his hand. The chip contains data from everything he used to have to carry around in his pockets: credit and bank card information, key cards to enter his office building and gym, business cards, and frequent shopper loyalty cards. When he’s in line for a morning coffee or rushing to get to the office on time, he doesn’t have to root around in his pockets or bag to find the right card or key; he just waves his hand in front of a sensor and he’s good to go.

Evolved from radio frequency identification (RFID)—an old and widely distributed technology—NFC chips are activated by another chip, and small amounts of data can be transferred back and forth. No wireless connection is necessary. Sjoblad sees his NFC implant as a personal key to the Internet of Things, a simple way for him to talk to the smart, connected devices around him.

Sjoblad isn’t the only person who feels a need for connection.

When British science writer Frank Swain realized he was going to go deaf, he decided to hack his hearing to be able to hear Wi-Fi. Swain developed software that tunes into wireless communication fields and uses an inbuilt Wi-Fi sensor to pick up router name, encryption modes and distance from the device. This data is translated into an audio stream where distant signals click or pop, and strong signals sound their network ID in a looped melody. Swain hears it all through an upgraded hearing aid.

Global datastreams can also become sensory experiences. Spanish artist Moon Ribas developed and implanted a chip in her elbow that is connected to the global monitoring system for seismographic sensors; each time there’s an earthquake, she feels it through vibrations in her arm.

You can feel connected to our planet, too: North Sense makes a “standalone artificial sensory organ” that connects to your body and vibrates whenever you’re facing north. It’s a built-in compass; you’ll never get lost again.

Biohacking applications are likely to proliferate in the coming years, some of them more useful than others. But there are serious ethical questions that can’t be ignored during development and use of this technology. To what extent is it wise to tamper with nature, and who gets to decide?

Most of us are probably ok with waiting in line an extra 10 minutes or occasionally having to pull up a maps app on our phone if it means we don’t need to implant computer chips into our forearms. If it’s frightening to think of criminals stealing our wallets, imagine them cutting a chunk of our skin out to have instant access to and control over our personal data. The physical invasiveness and potential for something to go wrong seems to far outweigh the benefits the average person could derive from this technology.

But that may not always be the case. It’s worth noting the miniaturization of technology continues at a quick rate, and the smaller things get, the less invasive (and hopefully more useful) they’ll be. Even today, there are people already sensibly benefiting from biohacking. If you look closely enough, you’ll spot at least a couple cyborgs on your commute tomorrow morning.