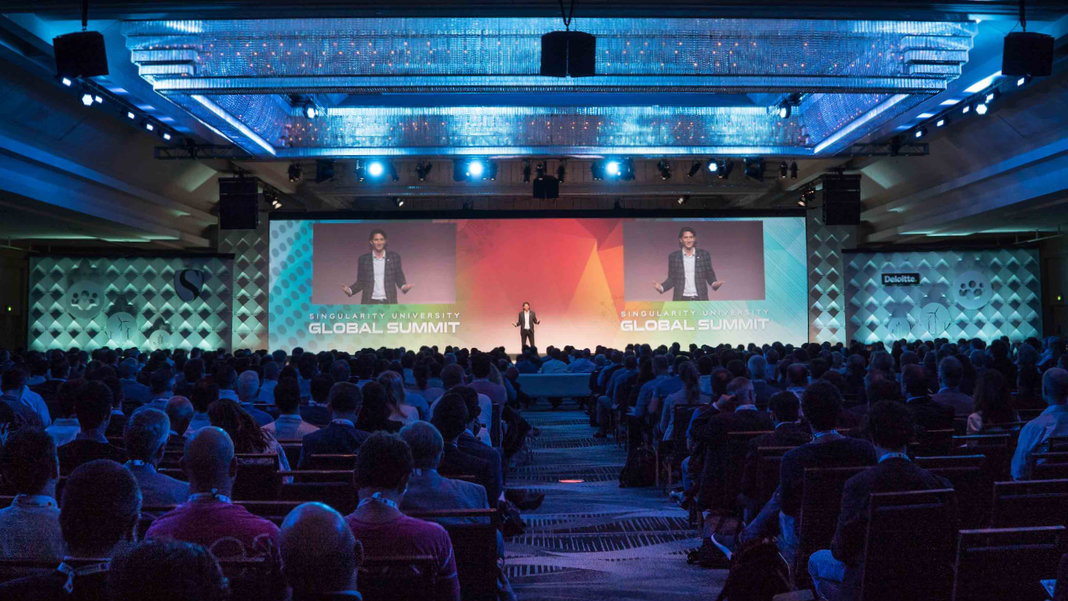 Singularity University’s (SU) second annual Global Summit begins today in San Francisco, and the Singularity Hub team will be there to give you a live look inside the event, exclusive speaker interviews, and articles on great talks.

Whereas SU’s other summits each focus on a specific field or industry, Global Summit is a broad look at emerging technologies and how they can help solve the world’s biggest challenges.

Talks will cover the latest in artificial intelligence, the brain and technology, augmented and virtual reality, space exploration, the future of work, the future of learning, and more.

Make sure you don’t miss anything by ‘liking’ the Singularity Hub and Singularity University Facebook pages and turn on notifications from both pages so you know when we go live. And to get a taste of what’s in store, check out the below selection of stories from last year’s event.

Are We at the Edge of a Second Sexual Revolution?
By Vanessa Bates Ramirez

“Brace yourself, because according to serial entrepreneur Martin Varsavsky, all our existing beliefs about procreation are about to be shattered again…According to Varsavsky, the second sexual revolution will decouple procreation from sex, because sex will no longer be the best way to make babies.”

VR Pioneer Chris Milk: Virtual Reality Will Mirror Life Like Nothing Else Before
By Jason Ganz

“Milk is already a legend in the VR community…But [he] is just getting started. His company Within has plans to help shape the language we use for virtual reality storytelling. Because let’s be clear, VR storytelling is still very much in its infancy. This fact makes it even crazier there are already VR films out there that can inspire and captivate on such a profound level. And we’re only going up from here.”

“Jacobstein calmly and optimistically assures that this revolution isn’t going to disrupt humans completely, but usher in a future in which there’s a symbiosis between human and machine intelligence. He highlighted 7 factors driving this revolution.”

Are There Other Intelligent Civilizations Out There? Two Views on the Fermi Paradox
By Alison Berman

“Cliché or not, when I stare up at the sky, I still wonder if we’re alone in the galaxy. Could there be another technologically advanced civilization out there? During a panel discussion on space exploration at Singularity University’s Global Summit, Jill Tarter, the Bernard M. Oliver chair at the SETI Institute, was asked to explain the Fermi paradox and her position on it. Her answer was pretty brilliant.”

Engineering Will Soon Be ‘More Parenting Than Programming’
By Sveta McShane

“In generative design, the user states desired goals and constraints and allows the computer to generate entire designs, iterations and solution sets based on those constraints. It is, in fact, a lot like parents setting boundaries for their children’s activities. The user basically says, ‘Yes, it’s ok to do this, but it’s not ok to do that.’ The resulting solutions are ones you might never have thought of on your own.”

“How many cyborgs did you see during your morning commute today? I would guess at least five. Did they make you nervous? Probably not; you likely didn’t even realize they were there…[Hannes] Sjoblad said that the cyborgs we see today don’t look like Hollywood prototypes; they’re regular people who have integrated technology into their bodies to improve or monitor some aspect of their health.”

“[Diamandis] said humans aren’t the longest-lived animals. Other species have multi-hundred-year lifespans. Last year, a study “dating” Greenland sharks found they can live roughly 400 years. Though the technique isn’t perfectly precise, they estimated one shark to be about 392. Its approximate birthday was 1624…Diamandis said he asked himself: If these animals can live centuries—why can’t I?”