The Hyperloop Is Now More Than Just a Crazy Idea, But Will It Really Take Off? 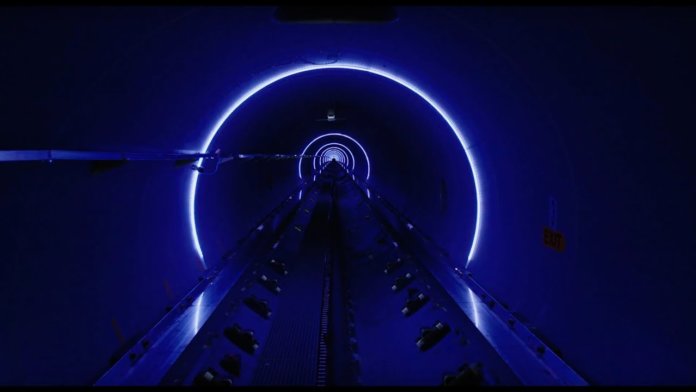 The hyperloop first hit headlines with a 2012 tease from Elon Musk and a 2013 paper by engineers at SpaceX and Tesla. Skepticism was, perhaps, warranted. Accelerating pods 700+ miles an hour through a low-pressure tube sounds amazing, but there’s a fair distance between feasibility and a finished product.

Since then, however, a number of companies and groups have taken up the cause, and at Singularity University’s Global Summit in San Francisco, we got a progress update from one of them.

Rob Lloyd is CEO of Hyperloop One. In three years, the startup has raised $160 million and gone from whiteboard strategy to a hyperloop prototype outside Las Vegas. According to Lloyd, they’ve accomplished quite a bit already and have even bigger dreams for the next few years.

But first, what is Hyperloop One building? Lloyd described it as a handful of basic components.

The pod. This is the aerodynamic vehicle that will carry people and cargo. The exact design of the pods will vary a bit depending on what’s being ferried.

The tube. This is…a tube. That much is simple. This particular tube, however, will be depressurized to a partial vacuum to reduce resistance between pod and air.

The motor. The pod is propelled by a linear electric motor. This works on the same principle as a circular electric motor, only one in which the static, electromagnetic part of the circle has been unfurled linearly along a track.

The magnets. The pod won’t touch the tube because it’s being levitated by magnets. This further reduces friction and combined with the low-pressure allows the pod to coast.

The controls. The system will be mostly automated. Software will send pods hurtling along in close proximity, joining and diverting them as traffic and destinations dictate.

Bring these components together at scale and you get a mode of land transportation theorized to travel over 600 miles an hour. This is what Hyperloop One is working toward, and over the last 10 months or so, they’ve built a full-size prototype.

The team installed the first section of tube on their 500-meter-long DevLoop test track last November, completed the whole rig this March, and began first tests in May. Then in July, the company unveiled the carbon fiber and aluminum aeroshell for their XP-1 test pod and accelerated it to 190 mph in the most recent and comprehensive tests a few weeks ago.

“The XP-1 performed as designed, handling high speeds and levitating in a vacuum tube depressurized to the equivalent of flying at 200,000 feet above sea level,” the team wrote.

All this is to say, the hyperloop isn’t only on paper anymore, which was by no means guaranteed.

Testing will continue, but Hyperloop One has much bigger plans for the future. The company’s goal is to have three production hyperloops completed by 2021.

Lloyd admitted this is “a bit of a moonshot.” But he said he’s been continually impressed by the dedication and smarts of his team of 280 engineers, and their 10-month prototype is testament to the speed at which they can work.

Hyperloop One put out a call to find the best hyperloop locations with the Hyperloop One Global Challenge. The contest brought in applications from 2,600 teams. Applicants included governments, regional groups, and private companies. They’ve selected 35 semi-finalists and will announce the three winners soon.

“The next big news for our company is where will we build the first hyperloop in the world?” Lloyd said. “I hope to have an answer in the next three months.”

It’s a pretty audacious, inspiring schedule they’re on. Still, scaling fast will be a significant challenge. And the idea has had its share of doubters from the beginning.

Critics suggest maintaining the required low pressure will prove a Sisyphean task over hundreds of miles. Others say seismic activity or subsidence could push the tube dangerously out of alignment. It’ll also be difficult to protect the system from attack. And in case of emergency how easy will it be to evacuate? Then there’s the cost to build and maintain what amounts to a brand new and simply massive bit of infrastructure.

These challenges, especially cost, get relevant when you go from prototype to scale. So, paper to prototype is a leap forward, but prototype to production may be a bigger one.

Lloyd suggests the first production hyperloops won’t be 1,700 miles long. They’ll start over shorter distances. Such intermediate steps would address concerns and allow for better cost estimates. If all checks out, momentum could take over from there, and a more comprehensive hyperloop network may sprout from the first few demonstrators.

Lloyd sketched out a vision of what success looks like, and why he’s inspired to make it happen. For one, he said, the meaning of a half-hour commute would change dramatically.

People could live hundreds of miles from work and still take advantage of the many opportunities offered by a bustling but costly city. Cities within a half hour of each other might link up. US connections could include San Francisco and Los Angeles, Portland and Seattle, or New York and Washington.

“People priced out of Brooklyn could move to Baltimore. Congressional aides would commute to Philadelphia. Whole cities—and labor and housing markets—would fuse together,” Emily Badger wrote in a recent New York Times article.

Lloyd also said Hyperloop One thinks their system has to be more than just a people transporter. They’ll have pods that carry people and small packages but also pods designed for cargo as big as shipping containers.

“It’s all about throughput,” he said. “Very rapidly moving containers away from our ports and not using the world’s most valuable land in city centers to store steel cans…And then what about connecting factories and supply chains and an on-demand environment of Alibaba or of Amazon with smaller package-based hyperloops?”

It’s a pretty vision, this branching network of nodes and conduits connecting the physical world of people and packages at high speed—almost like broadband telecommunication networks.

And the vision is clearly inspiring a lot of talented people. The movement to make this thing happen sooner than later has momentum. Even Elon Musk is back in the game, after previously saying he needed to focus on other projects and open-sourcing the idea.

Is now the time someone takes it past the prototype stage? Time will tell.

“The thing about hyperloop is that it does not exist until it actually exists,” Josh Giegel, vice president of design and analysis at Hyperloop Tech, told MIT Technology Review last year.