This Inspiring Teenager Wants to Save Lives With His Flying Robots 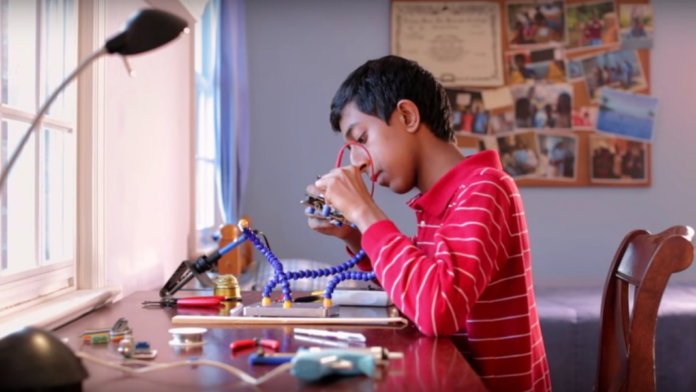 It’s not every day you meet a high school student who’s been building functional robots since age 10. Then again, Mihir Garimella is definitely not your average teenager.

When I sat down to interview him recently at Singularity University’s Global Summit, that much was clear.

Mihir’s curiosity for robotics began at age two when his parents brought home a pet dog—well, a robotic dog. A few years passed with this robotic companion by his side, and Mihir became fascinated with how software and hardware could bring inanimate objects to “life.”

When he was 10, Mihir built a robotic violin tuner called Robo-Mozart to help him address a teacher’s complaints about his always-out-of-tune violin. The robot analyzes the sound of the violin, determines which strings are out of tune, and then uses motors to turn the tuning pegs.

Robo-Mozart and other earlier projects helped Mihir realize he could use robotics to solve real problems. Fast-forward to age 14 and Flybot, a tiny, low-cost emergency response drone that won Mihir top honors in his age category at the 2015 Google Science Fair.

The small drone is propelled by four rotors and is designed to mimic how fruit flies can speedily see and react to surrounding threats. It’s a design idea that hit Mihir when he and his family returned home after a long vacation to discover they had left bananas on their kitchen counter. The house was filled with fruit flies.

After many failed attempts to swat the flies, Mihir started wondering how these tiny creatures with small brains and horrible vision were such masterful escape artists. He began digging through research papers on fruit flies and came to an interesting conclusion.

Since fruit flies can’t see a lot of detail, they compensate by processing visual information very fast—ten times faster than people do.

“That’s what enables them to escape so effectively,” says Mihir.

Escaping a threat for a fruit fly could mean quickly avoiding a fatal swat from a human hand. Applied to a search-and-response drone, the scenario shifts—picture a drone instantaneously detecting and avoiding a falling ceiling while searching for survivors inside a collapsing building.

Now, at 17, Mihir is still pushing Flybot forward. He’s developing software to enable the drone to operate autonomously and hopes it will be able to navigate environments such as a burning building, or a structure that’s been hit by an earthquake. The drone is also equipped with intelligent sensors to collect spatial data it will use to maneuver around obstacles and detect things like a trapped person or the location of a gas leak.

For everyone concerned about robots eating jobs, Flybot is a perfect example of how technology can aid existing jobs.

Flybot could substitute for a first responder entering a dangerous situation or help a firefighter make a quicker rescue by showing where victims are trapped. With its small and fast design, the drone could also presumably carry out an initial search-and-rescue sweep in just a few minutes.

Mihir is committed to commercializing the product and keeping it within a $250–$500 price range, which is a fraction of the cost of many current emergency response drones. He hopes the low cost will allow the technology to be used in developing countries.

Next month, Mihir starts his freshman year at Stanford, where he plans to keep up his research and create a company to continue work on the drone.

When I asked Mihir what fuels him, he said, “Curiosity is a great skill for inventors. It lets you find inspiration in a lot of places that you may not look. If I had started by trying to build an escape algorithm for these drones, I wouldn’t know where to start. But looking at fruit flies and getting inspired by them, it gave me a really good place to look for inspiration.”

It’s a bit mind boggling how much Mihir has accomplished by age 17, but I suspect he’s just getting started.