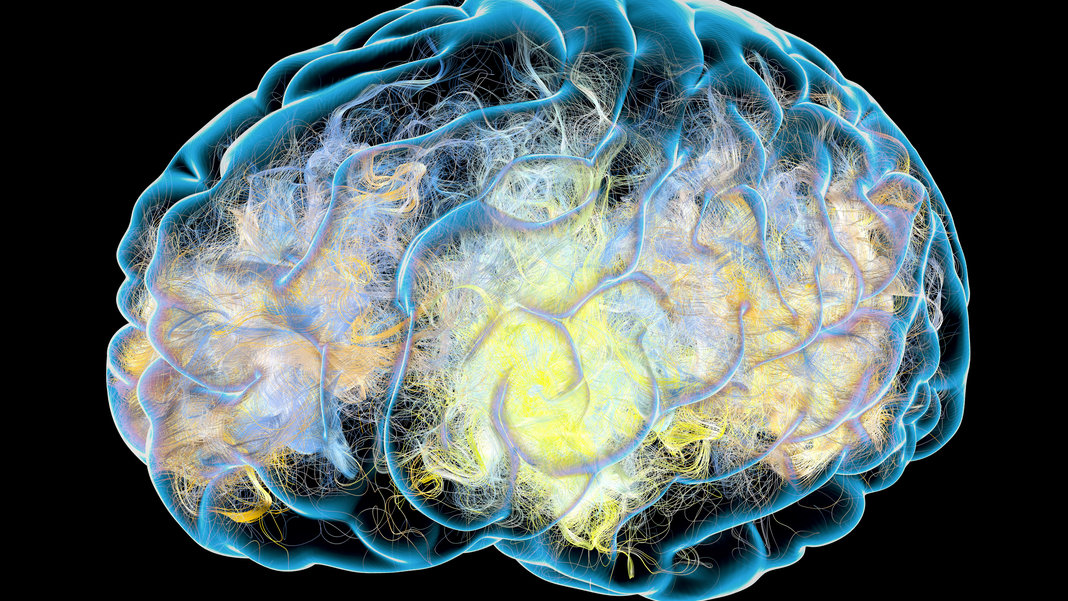 Around 50 million people worldwide are thought to have Alzheimer’s disease. And with rapidly aging populations in many countries, the number of sufferers is steadily rising.

We know that Alzheimer’s is caused by problems in the brain. Cells begin to lose their functions and eventually die, leading to memory loss, a decline in thinking abilities and even major personality changes. Specific regions of the brain also shrink, a process known as atrophy, causing a significant loss of brain volume. But what’s actually happening in the brain to cause this?

The main way the disease works is to disrupt communication between neurons, the specialized cells that process and transmit electrical and chemical signals between regions of the brain. This is what is responsible for the cell death in the brain—and we think its due to a build up of two types of protein, called amyloid and tau. The exact interaction between these two proteins is largely unknown, but amyloid accumulates into sticky clusters known as beta-amyloid “plaques”, while tau builds up inside dying cells as “neurofibrillary tangles”.

One of the difficulties of diagnosing Alzheimer’s is that we’ve no reliable and accurate way of measuring this protein build-up during the early stages of the disease. In fact, we can’t definitively diagnose Alzheimer’s until after the patient has died, by examining their actual brain tissue.

Another problem we have is that beta-amyloid plaques can also be found in the brains of healthy patients. This suggests the presence of the amyloid and tau proteins may not tell the whole story of the disease.

More recent research suggests chronic inflammation may play a role. Inflammation is part of the body’s defence system against disease and occurs when white blood cells release chemicals to protect the body from foreign substances. But, over a long enough period, it can also cause damage.

In the brain, tissue-damaging long-term inflammation can also be caused by a build-up of cells known as microglia. In a healthy brain, these cells engulf and destroy waste and toxins. But in Alzheimer’s patients, the microglia fail to clear away this debris, which can include toxic tau tangles or amyloid plaques. The body then activates more microglia to try to clear the waste but this in turn causes inflammation. Long-term or chronic inflammation is particularly damaging to brain cells and ultimately leads to brain cell death.

Scientists recently identified a gene called TREM2 that could be responsible for this problem. Normally TREM2 acts to guide microglia to clear beta-amyloid plaques from the brain, and to help fight inflammation within the brain. But researchers have found that the brains of patients whose TREM2 gene doesn’t work properly have a build-up of beta-amyloid plaques between neurons.

Many Alzheimer’s patients also experience problems with their heart and circulatory system. Beta-amyloid deposits in the brain arteries, atherosclerosis (hardening of the arteries), and mini-strokes may also be at play.

These “vascular” problems can reduce blood flow in the brain even more and break down the blood-brain barrier, a structure that is critical for removing toxic waste from the brain. This can also prevent the brain from absorbing as much glucose—some studies have suggested this may actually occur before the onset of toxic proteins associated within Alzheimer’s disease within the brain.

More recently, researchers have been looking deeper into the brain, specifically at the precise connections between neurons, known as synapses. A recent study published in Nature describes a process in the cells that may contribute to the breakdown of these synaptic communications between neurons. The findings indicate that this may happen when there isn’t enough of a specific synaptic protein (known as RBFOX1).

Thanks to this kind of research, there are now many new drugs in development and in clinical trials that could target one or more of the many brain-wide changes that occur with Alzheimer’s disease. Many researchers now believe that a more personalized approach to Alzheimer’s patients is the future.

This would involve a combination of drugs tailored to target several of the problems mentioned above, much like current treatments available for cancer. The hope is that this innovative research will challenge and pioneer a new way of treating this complex disease.