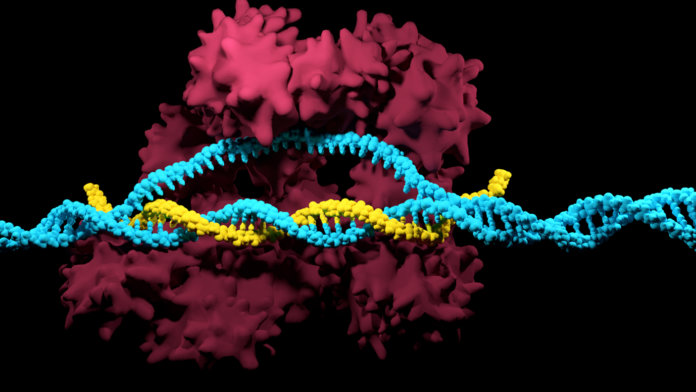 CRISPR-Cas9 is the talk of the town in biotechnology. There is a huge amount of public interest in the possibilities provided by this new genome editing technology, and many are hoping CRISPR could eventually cure most genetic disease, with positive impact for millions.

But a bioRxiv preprint of a new study has a potentially disturbing result: many people may already be immune to the most widely used forms of CRISPR.

Instead of successfully modifying the genome, when used therapeutically, the tool could trigger an adaptive immune response. Although this is a preliminary result, it will be an important consideration for clinical trials of CRISPR in humans, which are expected to begin shortly.

The proteins that can efficiently be used to edit the genome are a bacterial self-defense mechanism. CRISPR, which stands for “clustered regularly interspaced palindromic repeats,” is a bacterial immune system. When the bacterium is invaded by a virus, it can snip the RNA of that virus and include it in part of its own genome, allowing the bacterium to recognize that virus and destroy it with those same molecular scissors. These tools, which can efficiently scan through DNA for particular sequences then remove and even replace them, are almost perfect biotech tools for genome editing.

The issue arises in how the Cas9 proteins researchers use are manufactured.

The authors of the study noted that the most widely-used versions of the protein are extracted from the bacteria Staphylococcus aureus (S. aureus) and Streptococcus pyogenes (S. pyogenes). In bioengineering, particular bacteria—usually selected for being widely available and easy to cultivate—are often used to synthesize particular proteins. For example, most of our medical insulin is made from genetically modified E. coli. The researchers behind the study questioned whether because S. aureus and S. pyogenes regularly infect humans we might have built up some resistance to their proteins already. The infections they cause, often called strep and staph, are widespread enough that most people can be expected to have been exposed to the bacteria.

The study discovered that in many cases, human immune systems produced T-cells that specifically responded to the Cas9 protein from Staphylococcus aureus. This suggests that attempts at therapeutic use would cause an adaptive immune response that might render the therapy ineffective. Indeed, the authors of the paper wrote that use of these proteins in those who’ve been exposed to this bacteria could be harmful. “It may even result in significant toxicity to patients,” according to Stanford University’s Matthew Porteus, a  senior author of the paper. A paper by Wei Leong Chew suggests, “If left unchecked…it could lead to mortality.”

The authors of the paper wanted to ensure immune issues weren’t overlooked. “Like any new technology, you want to identify potential problems and engineer solutions for them,” according to Porteus. “And I think that’s where we’re at. This is an issue that should be addressed.”

But this is far from the end for CRISPR.

A popular use that’s envisioned is on human embryos, to edit out specific genes known to cause hereditary diseases. It seems unlikely that the embryos would already have the same immune response as an adult human who has been infected several times before. Or in some cases, adult cells could be removed from the body modified and reintroduced.

What’s more, there’s always the possibility that Cas9 could be synthesized from other bacteria; there are species of bacteria that may have the same bacterial immune system humans never come into contact with, such as those that live deep underwater in hydrothermal vents. Cas9 could be modified in some way to remove human immunity. If it’s produced entirely synthetically, it’s possible that the antigens from the host bacteria could be removed from the protein.

The prospects for the use of CRISPR are exciting, and the technology arises alongside a more advanced understanding of the human genome. The Human Genome Project started in 1990, an ambitious attempt to sequence all of the three billion base pairs in our DNA. It cost $3 billion and took 13 years for the first genome to be sequenced; over a thousand scientists worked together on the project. Now, you can get your genome sequenced for around $1,000, and some ambitious startups are even claiming $100.

With cheap genome sequencing, we can now easily read our own biological code. With CRISPR-Cas9, we may soon have a cheap method of editing that code. But that doesn’t instantly translate into being able to change traits or cure diseases. As far as designer humans go, we’re a long way off.

A sci-fi trope of “genetically perfect” humans who are more intelligent, stronger, and conform to some arbitrary standard of human beauty is out there, sure. But even something as simple as eye color, often used as a textbook example, is not a monogenic trait; it relies on several genes and the interactions between them. For more complex traits such as intelligence, we’re a long way from understanding the genetic links, let alone being able to engineer them.

This is why most experts think CRISPR-Cas9’s most promising use, at least initially, will be in curing monogenic diseases.

There has been promising progress here: experiments have been conducted that knock out Huntington’s disease in mice, while new therapies have cured genetic kidney defects and muscular dystrophy in the same creatures. But we’re still far from reliably identifying the genes involved in humans. For example, when whole genome sequencing was deployed in hospitals, doctors noticed markers for 11 out of 50 monogenic diseases in patients, but none of the patients displayed symptoms of those illnesses. If mishandled, could these monogenic markers result in unnecessary treatments or fear on behalf of patients around rare genetic conditions they don’t have?

CRISPR-Cas9 is at a stage where our ability to act exceeds our understanding of what we could do, and what we should do. We have access to our own source code, but we don’t know the programming language. We have tools that, in theory, could change the world; terrible genetic conditions could be a thing of the past. But before they can be used, we need as much information as possible. It’s difficult to see how we can be sure about the impacts of CRISPR without human trials, but, as this latest immune system response experiment shows, even the path in this direction is not straightforward.

Yet the possibilities range from curing some kinds of cancer to eliminating malaria—perennial foes of the human race. There may be setbacks, but it still seems likely that gene editing technology will change the world.