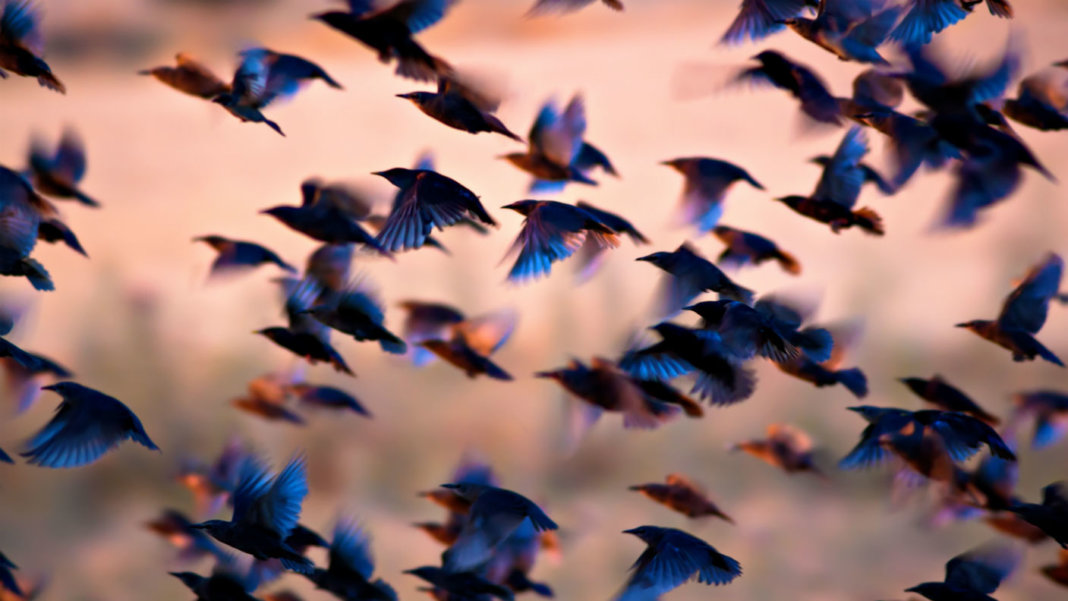 As a group, simple creatures following simple rules can display a surprising amount of complexity, efficiency, and even creativity. Known as swarm intelligence, this trait is found throughout nature, but researchers have recently begun using it to transform various fields such as robotics, data mining, medicine, and blockchains.

Ants, for example, can only perform a limited range of functions, but an ant colony can build bridges, create superhighways of food and information, wage war, and enslave other ant species—all of which are beyond the comprehension of any single ant. Likewise, schools of fish, flocks of birds, beehives, and other species exhibit behavior indicative of planning by a higher intelligence that doesn’t actually exist.

It happens by a process called stigmergy. Simply put, a small change by a group member causes other members to behave differently, leading to a new pattern of behavior.

When an ant finds a food source, it marks the path with pheromones. This attracts other ants to that path, leads them to the food source,  and prompts them to mark the same path with more pheromones. Over time, the most efficient route will become the superhighway, as the faster and easier a path is, the more ants will reach the food and the more pheromones will be on the path. Thus, it looks as if a more intelligent being chose the best path, but it emerged from the tiny, simple changes made by individuals.

So what does this mean for humans? Well, a lot. In the past few decades, researchers have developed numerous algorithms and metaheuristics, such as ant colony optimization and particle swarm optimization, and they are rapidly being adopted.

A swarm of robots would work on the same principles as an ant colony: each member has a simple set of rules to follow, leading to self-organization and self-sufficiency.

For example, researchers at Georgia Robotics and InTelligent Systems (GRITS) created a small swarm of simple robots that can spell and play piano. The robots cannot communicate, but based solely on the position of surrounding robots, they are able to use their specially-created algorithm to determine the optimal path to complete their task.

This is also immensely useful for drone swarms.

Last February, Ehang, an aviation company out of China, created a swarm of a thousand drones that not only lit the sky with colorful, intricate displays, but demonstrated the ability to improvise and troubleshoot errors entirely autonomously.

Further, just recently, the University of Cambridge and Koc University unveiled their idea for what they call the Energy Neutral Internet of Drones. Amazingly, this drone swarm would take initiative to share information or energy with other drones that did not receive a communication or are running low on energy.

Militaries all of the world are utilizing this as well.

Last year, the US Department of Defense announced it had successfully tested a swarm of miniature drones that could carry out complex missions cheaper and more efficiently. They claimed, “The micro-drones demonstrated advanced swarm behaviors such as collective decision-making, adaptive formation flying, and self-healing.”

NASA also plans on deploying swarms of tiny spacecraft for space exploration, and the medical community is looking into using swarms of nanobots for precision delivery of drugs, microsurgery, targeting toxins, and biological sensors.

What If Humans Are the Ants?

The strength of any blockchain comes from the size and diversity of the community supporting it. Cryptocurrencies like Bitcoin, Ethereum, and Litecoin are driven by the people using, investing in, and, most importantly, mining them so their blockchains can function. Without an active community, or swarm, their blockchains wither away.

When viewed from a great height, a blockchain performs eerily like an ant colony in that it will naturally find the most efficient way to move vast amounts of information.

Miners compete with each other to perform the complex calculations necessary to add another block, for which the winner is rewarded with the blockchain’s native currency and agreed-upon fees. Of course, the miner with the more powerful computers is more likely to win the reward, thereby empowering the winner’s ability to mine and receive even more rewards. Over time, fewer and fewer miners are going to exist, as the winners are able to more efficiently shoulder more of the workload, in much the same way that ants build superhighways.

Further, a company called Unanimous AI has developed algorithms that allow humans to collectively make predictions. So far, the AI algorithms and their human participants have made some astoundingly accurate predictions, such as the first four winning horses of the Kentucky Derby, the Oscar winners, the Stanley Cup winners, and others. The more people involved in the swarm, the greater their predictive power will be.

To be clear, this is not a prediction based on group consensus. Rather, the swarm of humans uses software to input their opinions in real time, thus making micro-changes to the rest of the swarm and the inputs of other members.

Studies show that swarm intelligence consistently outperforms individuals and crowds working without the algorithms. While this is only the tip of the iceberg, some have suggested swarm intelligence can revolutionize how doctors diagnose a patient or how products are marketed to consumers. It might even be an essential step in truly creating AI.

While swarm intelligence is an essential part of many species’ success, it’s only a matter of time before humans harness its effectiveness as well.