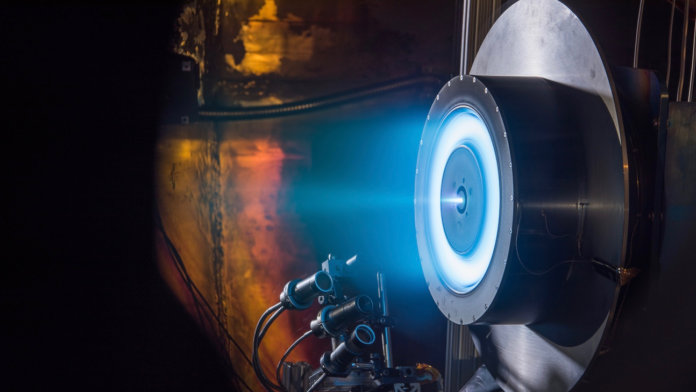 On Feb. 6, SpaceX made history when it launched its Falcon Heavy rocket from Cape Canaveral in Florida. It now reigns as the biggest and most powerful rocket in the world. Elon Musk, the messianic CEO of the billion-dollar space startup, plans to build an even bigger rocket that he promises will eventually take people to Mars.

The Falcon Heavy is a 230-foot-tall engineering marvel, with the ability to ferry loads of up to 141,000 pounds into low-earth orbit. Only the Saturn V, the rocket that helped carry Neil Armstrong and company to the moon in the 1960s and 1970s, was bigger and badder, but has long since been retired. Both rockets, however, rely on liquid fuel as propellants.

A one-way trip to Mars using conventional chemical rockets could take up to nine months. It’s a long time for a human crew to spend in a spaceship exposed to radiation and other hazards. That’s one reason why NASA and other space agencies, as well as universities and private industry, are pursuing different types of rocket technologies.

The Thrust of Plasma Engine

The leading alternative for a ride to Mars is electric propulsion. In 2015, NASA tagged three startups to develop solar electric propulsion (SEP) systems, providing each with a three-year grant as part of the agency’s Next Space Technologies for Exploration Partnerships program.

NextSTEP is just one cog in NASA’s most current long-term plan to build an orbiting space station around the moon that will serve as the staging area for voyages to the Red Planet. It’s mostly science fiction on the order of Arthur C. Clarke at this point, but SEP systems are already a reality, though nothing close to the scale now being proposed.

The three companies under contract—Ad Astra Rocket Company out of Webster, Texas, and Aerojet Rocketdyne and MSNW, both from Redmond, Washington— are developing variations on ion or plasma thrusters.

Instead of ejecting combustion gases that produce thrust in chemical rockets, ion thrusters apply force to move an object by ionizing an inert gas like xenon or hydrogen through an electric charge (usually from solar or nuclear materials). That strips electrons from atoms, creating positively-charged ions. The resulting gas consists of positive ions and negative electrons—in other words, plasma. Electric and/or magnetic fields are then used to direct the plasma to provide thrust.

Plasma is actually a distinct fourth state of matter, the other three being solid, liquid, and gas. The most glaring example of plasma is at the center of our solar system, though it’s quite abundant in nature and human applications, from lightning to plasma TVs.

Indeed, ion thrusters have been used for years on satellites and even some deep-space missions. In 2015, for instance, ion engines powered NASA’s Dawn probe into an orbit around the dwarf planet Ceres, which sits in an asteroid belt between the orbits of Mars and Jupiter.

While ion thrusters lack the punch of a Falcon Heavy rocket in terms of the sudden acceleration required to pull free of Earth’s gravity, the much smaller engines excel in near-frictionless outer space, where they are at least 10 times more fuel-efficient.

That means a spacecraft with ion thrusters can constantly accelerate, eventually reaching speeds much greater than conventional chemical engines. For example, the retired Space Shuttle could hit speeds of 18,000 mph. A spacecraft powered by ion thrusters could theoretically streak through the cosmos at more than 200,000 mph, according to NASA.

Former astronaut Franklin Chang Diaz, who leads Ad Astra, has said he could do the cannonball run to Mars in less than 40 days. He first conceived of Ad Astra’s Variable Specific Impulse Magnetoplasma Rocket (VASIMR) back in the 1980s.

Much more recently, the company demonstrated that it could produce 100 kilowatts of power from the VASIMR engine during the course of 100 non-consecutive hours. The next step is to fire the engine to produce a plasma ball as hot as the sun and run it for 100 hours straight. Aerojet Rocketdyne is also reportedly ready for the next 100-hour test phase of its Hall thruster, another type of plasma-based engine. The best most ion thrusters can do today is about 5 kW.

Meanwhile, MSNW is exploring various prototypes related to fusion rockets, which would expel plasma produced from fusing a mixture of hydrogen and helium isotopes that had been heated by low-frequency radio waves. The process converts some of the mass of the atoms into energy. A lot of energy.

Out of Thin Air

Not to be outdone, the European Space Agency just tested another type of ion thruster that can literally live on thin air. The air-breathing electric propulsion system sucks in air molecules from the edge of a planet’s atmosphere, largely replacing the need to carry a gas propellant like xenon.

While the technology would not be useful for a long-range spacecraft, it would be ideal to power low-orbit satellites or aircraft around Earth or even other planets like Mars, where it could draw on gases like carbon dioxide in the atmosphere for fuel.

The thruster was tested in a vacuum chamber in Italy, simulating the environment at an altitude of more than 300 miles.

Against the Laws of Nature

An air-breathing electric propulsion system might seem mundane against another type of space engine that remains just a theory at this point: an electromagnetic drive propulsion system that doesn’t use any kind of propellant.

The so-called EmDrive, theorized by NASA scientists, creates thrust by bouncing microwaves around in a closed chamber. In theory, the engine could make the trip to Mars in about two months. That is, if there wasn’t the pesky detail that it violates the laws of nature. In particular, the EmDrive goes against Isaac Newton’s third law of classical mechanics, which states that for every action, there is an equal and opposing reaction.

The debate on whether the EmDrive could prove to be humanity’s ticket to Mars and beyond is still ongoing.

Out of This World

Another out-of-this-world idea for a space engine had come from a startup out of Colorado called Escape Dynamics, which proposed using microwave propulsion technology.

The design called for externally powering a spaceship’s electromagnetic engine by beaming microwaves to the aircraft. The beam would help heat on-board hydrogen fuel, which would then be expelled to produce thrust. An early prototype showed some promise, but the company was forced to close shop in 2015 when it couldn’t raise additional R&D funds.

It Is Rocket Science

Next year marks the 50th anniversary of the historic moon landing, where one man took a giant leap for mankind. To take the next step across the solar system will require a giant technological leap in rocket science. Today, it may seem improbable that a human will set foot on Mars, but no doubt it seemed similarly impossible that we would put a man on the moon.

As sci-fi author Clarke said, “The only way to discover the limits of the possible is to go beyond them into the impossible.”